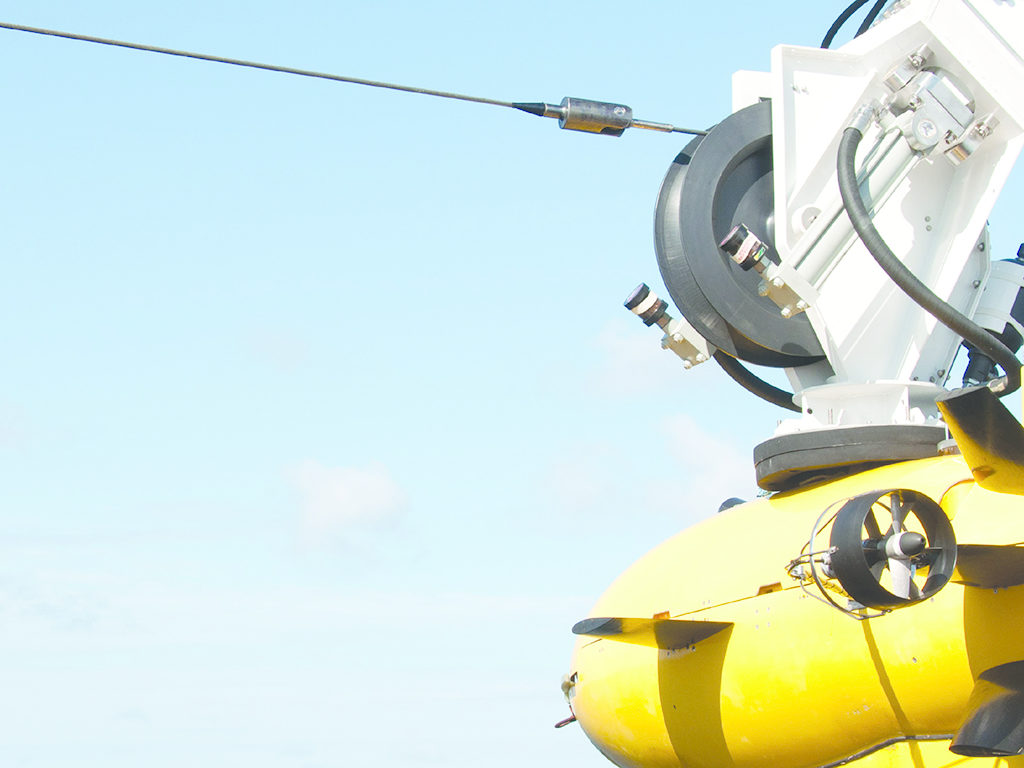 Asset integrity management encompasses the design, operation, and maintenance of an asset to preserve its integrity at an acceptable level of risk throughout its operating life. Protection of health, safety, and the environment is a critical component of the processes and procedures used to monitor the conditions of offshore surface and subsea facilities and structures.

Monitoring, modeling, and inspection capabilities have advanced as data capture and aggregating methods have been refined. Notably, the development and enhancement of satellite imagery, global positioning systems (GPS), and the ability to precisely identify geographic locations has spurred on new technologies and applications of technologies.

Monitoring and Inspection of Subsea Facilities

A field demonstration of a Lockheed Martin autonomous underwater vehicle (AUV), the Marlin, completed in the US Gulf of Mexico in 2011, validated the AUV’s autonomous inspection capabilities made possible by incorporation of advanced GPS technologies. The work was performed under a contract with Research Partnership to Secure Energy for America (RPSEA). The AUV will be commercially available later this year.

The Marlin is designed for shallow-water applications. Weighing 2,100 lbm, the Marlin is relatively small, said Lewis Dennis, business development manager with Lockheed Martin. Its payload capacity is 250 lbm with a volume of 5 ft3. It can be deployed to depths of 1,000 ft with an operational endurance of 18 to 24 hours, depending on the mission profile and onboard sensor usage. Communication with the AUV is achieved through an acoustic modem, Ethernet, Wi-Fi, radio frequency, or an optional fiber-optic tether. Navigation is directed through Doppler-aided inertial navigation, GPS, feature-/terrain-based navigation, and ultrashort baseline sonar, a method of underwater acoustic positioning. The AUV is equipped with high-resolution 3D multibeam sonar from which captured images are used to build 3D mosaics with change-detection capability.

The Marlin has benefitted from the company’s experience in the development of AUVs for scientific research, aviation, and military applications. “The commercial Marlin pedigree has been in development for a couple of years,” Dennis said. “Existing, proven technologies were repackaged for this commercial offering.”

Dennis said, “The current technology in the industry collects data through various means, including AUVs, divers, remotely operated vehicles, and the dropping of sensors onto the seabed. For those technologies, the post-mission manipulation of data and building of a mosaic birds-eye view can take weeks.”

The Marlin is programmed to operate autonomously using a high-level mission planner based on the needs of onshore facilities engineers who identify the goals of the inspection. When deployed, the AUV collects a combination of 3D, georeferenced, and geotagged data. A low-resolution model of subsea structures is generated offshore, which can be used by the engineers to get a first look at the data collected, identify problems for further inspection, and make a live determination of the situation (e.g., in post-hurricane applications, the engineers can see subsea debris and indications of damage). Dennis said, “Because the AUV is untethered, it can make a gross survey of the area and structure and call out areas of concern on that model.”

Lockheed Martin partnered with RPSEA and Chevron Technology in the summer of 2011 to test the Marlin using two nonoperational fixed platforms in the Gulf of Mexico, including an eight-pile platform (Platform 1) and a four-pile platform (Platform 2). The first autonomous scan was completed on Platform 1 in 27 minutes to demonstrate the capability to build a high-resolution 3D model of the platform (Fig. 1).

Autonomous missions were conducted to demonstrate the system’s ability to detect large-scale anomalies, defined as a minimum of 1-m3-size anomaly in free space (openings within the platform jacket) or in encumbered space (against structural members or joints), or a 1-ft3-size anomaly in free space. Once the 3D model of Platform 2 was constructed from the model-building run, several anomalies were incorporated into the 3D model, which became the base model for further inspection missions. Inspections were then run around the platform at 15-m offset comparing the images collected to the base 3D models altered with anomalies, identifying the changes in real time. All of the anomalies were detected.

Dennis said, “The Marlin dismisses some of the mundane human tasks, such as watching hours of videotape, where everything appears as it did during the last inspection. The proprietary software performs autonomous change detection. Differences from the last inspection are highlighted, and a list is generated, providing nearly real-time reporting. That list of changes is immediately available to the customer, in contrast to taking the images back to shore and comparing them with videotape from the last inspection.”

During planning for decommissioning, the original fabrication drawings provide the only data available about the platform’s structure in some cases. Over the life of a platform, ownership may have changed hands several times, resulting in unavailable or outdated data. Alterations to the original platform design, such as risers, pipelines, and boat landings, are not documented in the as-built drawings. Dennis said, “The AUV can model structures and junk at the bottom to provide documentation of the platform’s current condition.”

A deepwater version of the Marlin is in a design review stage with a planned delivery and trial slated for late in 2014, most likely in the Gulf of Mexico. The MK3’s deepwater capabilities will include field residency where the AUV is capable of living in the field and being operated remotely. “Arctic regions are on our radar for the deepwater version because of the ice-over periods,” Dennis said.

Structural failure of offshore platforms can lead to loss of life, loss of asset, and environmental consequences. When platforms are susceptible to damage from environmental wave loading and fatigue, online structural integrity monitoring detects member failures and reduces the risks of platform collapse between inspections and improves structural reliability.

Many offshore fixed platforms are approaching or have exceeded their original design lives. In seeking life extensions, operators need to assess the remaining life, and online monitoring can offer knowledge of the platform’s structural performance.

An online monitoring system based on natural frequency was applied to the Ninian Southern platform, operated by CNR International in the northern North Sea in a water depth of 140 m. Installed in 1977, the platform jacket is a self-floating, four-legged design with K bracing. The bracing system has little redundancy in the event that one of the braces becomes severed. The platform has a history of weld defects and fatigue-induced brace failures, which have required extensive hyperbaric weld repair work. An online integrity monitoring system, provided by Atkins Oil and Gas, was installed to continuously measure and report the natural frequency of the platform in real time.

The structural integrity monitoring system (SMS) uses accelerometers placed on the topside on the deck above each of the four platform legs. Two accelerometers are placed at each location to measure accelerations in the platform east/west (EW) and north/south (NS) directions. Typical time traces of accelerations are shown in Fig. 2.

The SMS hardware and software, developed by Fugro Structural Monitoring, are contained in a cabinet in the platform’s control room. Two systems were installed to provide redundancy during outage and repair of one of the systems. The system identifies spectral peaks and natural frequencies from the response spectra for data collected every hour. The raw time history data are stored in addition to the hourly summary data (natural frequencies, mean and standard deviation of accelerations, and displacement response). Periodical backup of the data is made and stored onshore.

In December 2006, a jacket brace severed and was repaired in October 2007. At the moment the brace severed in two, a sudden 3% drop in the NS mode natural frequency was instantly detectable. Before this event, there was a period of crack growth around the circumference of the brace, which did not lead to a gradual decrease in natural frequency.

Natural frequency monitoring with the SMS detects full severance of the individual braces when the change in natural frequency is greater than 2%. Because monitoring is continuous, a severance of a brace should be detectable on the day it severs. Information about the face of the structure on which the severed brace is located can also be obtained using other data on which frequencies are reduced. When the natural frequency drops below a threshold, an alert is forwarded to the structural engineers and further investigation of the accelerometer measurements is performed.

The management of the consequences of failure requires that the platform possesses sufficient capacity to withstand loading following brace severance. Reserve capacity is determined from pushover analysis and is measured using the damaged strength ratio (DSR). A typical pushover analysis is shown in Fig. 4. The DSR is defined as the base shear under which total collapse of the structure would occur divided by the 100-year return period wave-induced base shear. To effectively use SMS, failure of braces must not result in low DSR values. Those braces whose failure is not detectable by the SMS must not have low DSRs.

Accurate identification of the location of subsea structures, including pipelines, is important in risk assessment when planning new builds, modifications, and relocations of structures. Any subsea environment can be crowded with infrastructure, and current locations of all operators’ assets are not readily available

InterMoor launched a software system that provides up-to-date photos of the infrastructure in the Gulf of Mexico using Google Earth to evaluate the risk of damaging existing infrastructure (Fig. 5). Users of the MoorVision system can query the Bureau of Ocean Energy Management’s public-domain Gulf of Mexico infrastructure database and collect and compile infrastructure data, including well production, pipeline flow rates, and reported metering rates within a 15-nautical-mile radius. A Google Earth visualization file can be generated and imported to the consequence assessment workbook developed by the American Bureau of Shipping.