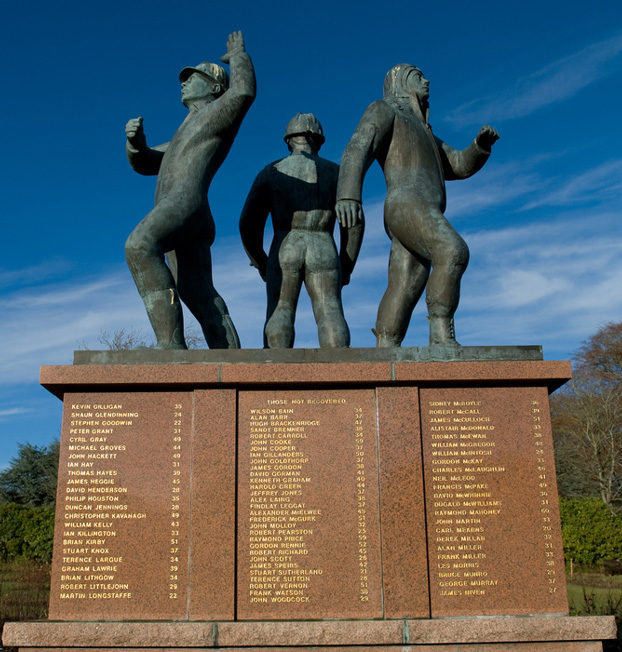 The Piper Alpha Memorial Garden is located in Aberdeen.

July 6 marks the 30th anniversary of the Piper Alpha disaster in the North Sea, which is in terms of loss of life, the worst disaster in the history of the offshore oil industry. The Piper Alpha tragedy had a profound impact on the development of process safety culture and legislation, not just in the UK, but throughout the world.

Much has been written about this tragic accident and much has been learned about preventing major accidents since then.

With the great crew change already taking place, it is time to reflect on the disaster to ensure that the painful lessons are never forgotten.

This article reviews the disaster and discusses the development of process safety legislation since then. Much of the material discussed here is based on Kletz (2001), Lees (2005), and Saadawi (2018).

The Piper Alpha platform was a large, fixed structure platform located in 474 ft of water in the Piper field in the North Sea some 110 miles northeast of Aberdeen. It was connected by oil and gas pipelines to two other production platforms, Claymore and Tartan A, as well as a manifold compression platform MCP-01.

As shown in Fig. 1, which was adopted from Lees and Saadawi, the production deck was at the 84-ft level of the platform. It consisted of four modules, designated as Modules A, B, C, and D. Module A was the wellhead module, Module B the oil separation module, Module C was the gas compression module, and Module D the power generation and utilities module.

Fig. 2, which was adopted from Kletz and Saadawi, shows the configuration of the two reciprocation condensate injection pumps. There was normally one condensate pump operating and one on standby. Each pump, being a positive displacement pump, was protected from overpressure by a relief valve (or a pressure safety valve [PSV]). The pumps were located at the 68-ft level, while the PSVs were located in Module C.

Events Leading to the Initial Explosion

On the day of the tragedy, there was more than one maintenance job to be done on the standby reciprocating condensate pump under the permit-to-work (PTW) system (Lees). Two jobs were related to the preventative maintenance of the pump and repair of the pump coupling.

A third maintenance job started on that spare pump during the day. The relief valve of the standby pump had been taken off for testing. The work was not completed by 1800 hours, the end of the day shift, and refitting the relief valve had been left over for the following day. The open-ended piping was loosely connected with a blind flange (Fig. 3). This vital information was not communicated to the night shift, who were only aware of the first two jobs.

Some 62 men escaped, mainly by climbing down knotted ropes or jumping from height, but 167 men died, the majority in the living quarters.

The scale of the Piper Alpha disaster was due primarily to the large inventory of the three high-pressure pipelines connected to the platforms (Lees).

After the accident, the UK government initiated a judicial public inquiry into the disaster, which was led by Lord Cullen. The inquiry lasted for 2 years and revealed a number of catastrophic failures in the management and control of risk on the installation. The exhaustive inquiry report made a total of 106 recommendations intended to prevent the reoccurrence of such a disaster in the offshore oil industry (Cullen).

There were many lessons learnt from Piper Alpha (Kletz and Lees). Some of the key lessons are summarized below.

The central recommendation of the Lord Cullen report was the introduction of the Offshore Installation Regulations (Safety Case) in 1992. The Safety Case requires the operator or duty holder to demonstrate that the specific hazards and subsequent risks associated with the new facilities have been recognized, and appropriate measures have been taken to minimize these risks to personnel on the facility to the ALARP (As Low As Reasonable Practical) level. The Safety Case regime is often viewed as essentially a risk-based goal-setting system.

Another offshore oil disaster still fresh in our minds is the Deepwater Horizon/Macondo. Like Piper Alpha, the chain of events that led to the tragedy started with loss of containment, i.e., a hydrocarbon leak, which ignited and caused fire and explosion.

A summary of the main impacts of each disaster is given in the table below. 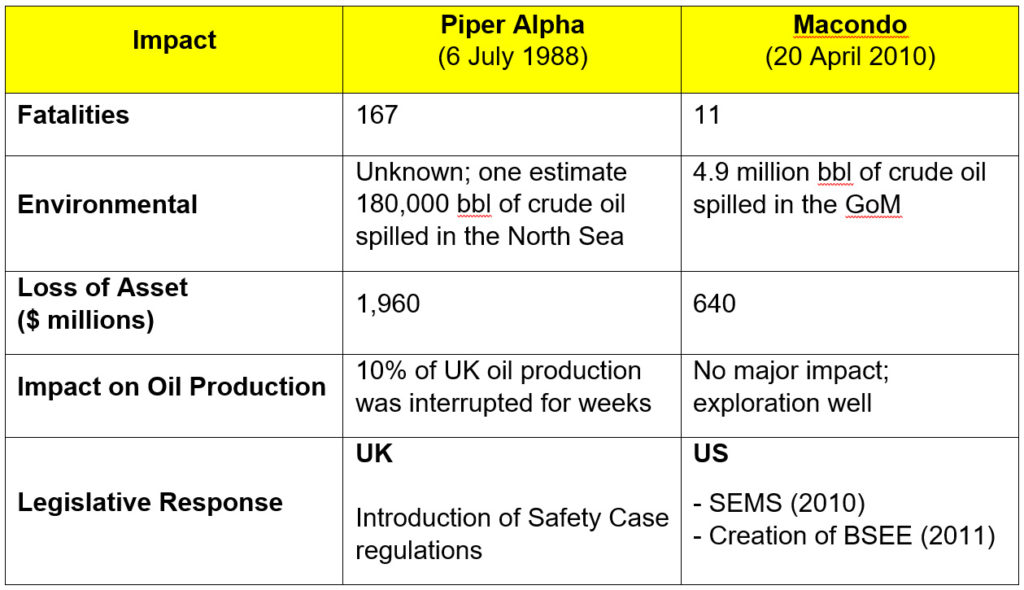 The asset loss values are property loss only and inflated to 2017 values (Marsh). It should be noted that Piper Alpha was a fixed structure production platform with accommodation, whereas Deepwater Horizon was a semisubmersible drilling rig.

Much of the leading work in process safety was actually done in the chemical industry rather than the oil industry. SPE has been actively raising the profile of process safety among its members.

SPE formed a process safety group to help with applying process safety to the upstream oil and gas sector. One of the goals of this work group is to help engineering, drilling and operations personnel to apply process safety principles, commonly used in other industries such as the chemical industry in the upstream E&P industry.

Oil and gas facilities are designed, constructed, and operated by people.  Most accidents involve human errors. SPE established a technical section dedicated to human factors, which aims to raise awareness of the role human factors play in the oil and gas industry and promote improved HSE performance through better application of human factors technology.

Process safety has been addressed in several SPE webinars including a webinar by a survivor of the Piper Alpha disaster (Rae). Many SPE papers are available in OnePetro which deal with various aspects of process safety, and SPE published several technical reports dealing with human factors, sharing learning from offshore, and toward a goal of zero harm.

Furthermore, SPE has recently agreed to co-publish a book with the Center for Chemical Process Safety on the application of risk-based process safety to upstream operations.

SPE 190620 (2018) The Legacy of Piper Alpha 30 Years on: Is the Oil Industry Doing Enough About Process Safety? by H. Saadawi, Ringstone Petroleum Consultants.

SPE Technical Report (2018) Getting to Zero and Beyond: The Path Forward.