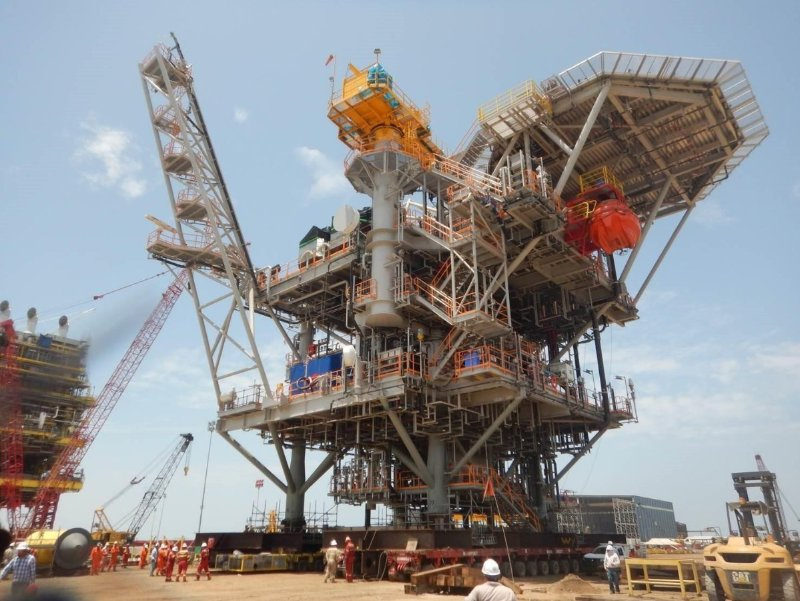 McDermott’s Angelin platform was loaded out from its fabrication facility in Mexico. lifted installation is scheduled for this summer. BP Trinidad and Tobago is expected to take operation of the facility in 4Q 2018. Source: McDermott.

McDermott has made significant progress on a pair of major projects this week.

The US-based engineering and construction company recently announced that the Angelin platform was safely loaded out from its fabrication facility in Altamira, Mexico, for delivery to Trinidad and Tobago. BP, who owns 70% of the project to go with Repsol’s 30%, sanctioned the offshore gas project last June. The four-well development will have a 600-MMscf/D production capacity. Gas from Angelin will flow to the Serrette platform hub via a 13-km pipeline.

First gas is expected from the Angelin facility, which will be installed 37 miles off the southeast coast of Trinidad at 213-ft water depth, in 1Q 2019. McDermott was contracted to build a four-legged main pile jacket and a four-deck topside. The pipeline will be installed by McDermott’s DLV 2000 vessel.

In other areas, work continues on McDermott’s construction of the Abkatun-A2 platform for Pemex. McDermott began installation work on the platform in May, nearly 2 years after cutting first steel at the Altamira facility.

Pemex awarded a $454-million contract for engineering, procurement, construction, and installation (EPCI) contract for the platform to McDermott in June 2016. The project, which at the time was McDermott’s largest in size and total value, will be located in 124-ft water depth in the Bay of Campeche. It will provide replacement and expansion capabilities to the existing Ku-Maloob-Zaap, Cantarell, and Ayatsil facilities.