Advancements in the Removal of Mercury From Crude Oil 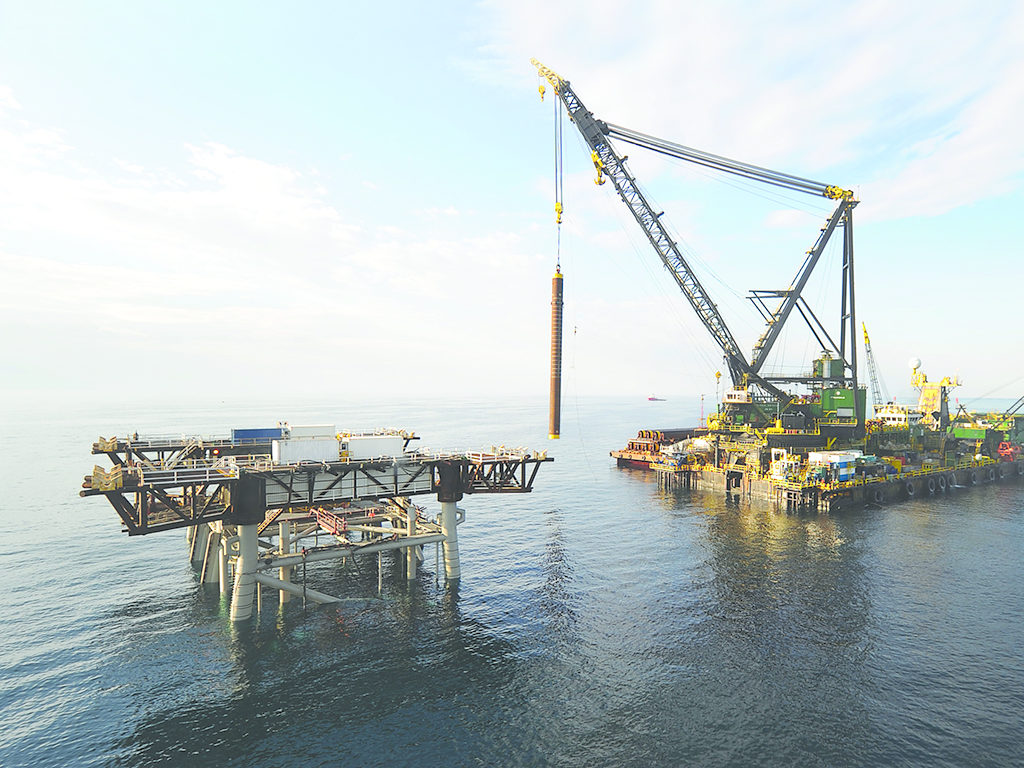 Photo courtesy of ExxonMobil.
Production from the Kipper gas field is delayed until ExxonMobil completes the modifications required for mercury removal at its onshore gas processing facilities.

Global awareness of the environmental effects of mercury has grown significantly over the past decade. In the oil and gas industry, the presence of mercury in natural gas, condensate, and crude oil has come to the forefront in the development, design, and operation of hydrocarbon processing equipment.

Global exploration and production has expanded to regions containing hydrocarbons with higher concentrations of mercury than were previously encountered. Mercury deposits are often associated with geological plate boundaries, fold belts, and areas with volcanic or hydrothermal activity. Table 1 shows the regional estimated levels of mercury in natural gas and condensates. 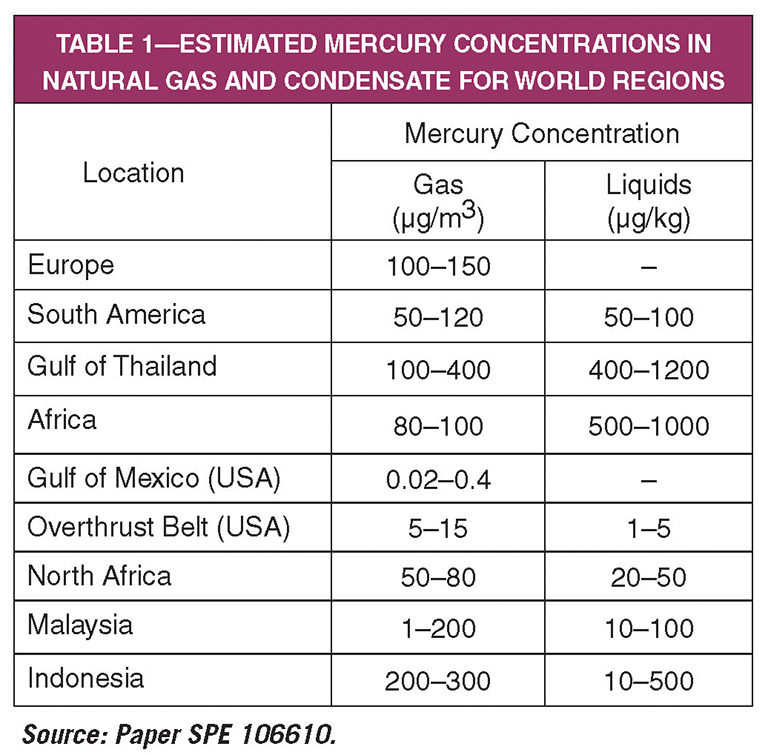 Issues associated with mercury’s presence in hydrocarbon processing systems have become more apparent as deeper and hotter reservoirs (often with higher levels of mercury) were exploited, and with the low-temperature gas processing used for liquefied natural gas (LNG) and natural gas liquids (where mercury accumulates in the lower and cooler parts of the processing equipment). Increased offshore processing and the use of lightweight aluminum cryogenic heat exchangers has revealed the problems associated with mercury amalgamation with aluminum and the resultant weakening of the metal through corrosion and embrittlement.

Mercury in most forms (species) is toxic and contributes to health, safety, and environmental risks. In natural gas, mercury occurs as the metallic form (species). Various forms of mercury—elemental, organometallic, and inorganic salt—can be present in natural gas condensates, depending on the origin of the condensates. Knowledge of the different species and total mercury content in condensates is important, because the damage caused to industrial facilities, particularly petrochemical plants, by the presence of mercury can be financially crippling.

In 1973, recognition of the effects of mercury in natural gas occurred when a catastrophic failure of aluminum heat exchangers occurred at the Skikda LNG plant in Algeria (Spiric 2001). Subsequent investigations determined that mercury corrosion caused the failure. It was postulated that the mercury likely came from an accidental source, such as the testing instruments used in plant and field startup. Further investigation found that a combination of mercury and water temperatures around 0°C caused corrosion in the aluminum tubes (constructed of aluminum alloy 6061).

After the Skikda failure, a study of the Groningen field in Holland revealed similar corrosion in the gas gathering system. Carbon dioxide was initially thought to be the cause, but later investigations pinpointed mercury, with concentrations ranging from 0.001 to as high as 180 µg/Nm3 (Nm3 represents normal m3 under standard temperature and pressure).

With the realization of the equipment failures and multimillion-dollar cost implications of mercury in hydrocarbons came increased efforts to develop mercury removal technologies and processes.

The processes and technologies used to remove mercury from natural gas are generally considered mature, but the industry’s experience in the removal of mercury from raw condensate is limited. Petronas has published its work on developing mercury removal units for raw and untreated condensate (Sainal et al. 2007a, 2007b) and is collaborating with Queens University, Belfast, Ireland, to develop ionic liquids for mercury removal from natural gas and condensate (Shariff 2011).

Technologies for the removal of mercury from crude oil are the least mature and the topic of this article.

Mercury in crude oil has received more scrutiny as refineries seek “cleaner” oil for their product streams. Among the problems cited are: excessive levels of mercury in wastewater streams, preventing discharge in open rivers or oceans; mercury contamination of products generated from the refinery streams, such as gas streams, liquefied petroleum gas, and light or heavy distillate products; hydrotreating catalyst poisoning or contamination in refined streams because of metal amalgamation; corrosion of equipment because of metal embrittlement; and additional expenses in upstream and downstream facilities because of special disposal requirements for contaminated mud from tanks, cleaning of equipment and ships, and restricted product shipping alternatives.

Although refiners have added processes for mercury removal in the lighter hydrocarbon product streams, stricter limits for mercury in crude oils entering the refineries are being implemented, driving producers to develop approaches to ensure commercialization of their crude oil.

Two or more types of crude oils are sometimes blended to moderate the mercury concentrations, but variations in mercury levels across reservoirs and within reservoirs prevent this approach from being reliable and do not eliminate potential restrictions on the acceptance of the produced crude oil.

Fig. 1 shows the wide variation of mercury content in crude oil from a reservoir in Argentina through a 1-month period (Salvá and Gallup 2010). The total mercury content ranged from approximately 1,500 to 8,000 parts per billion by weight (ppbw). In fields related to the Springhill formation of the Austral basin in Argentina, hydrocarbon liquids are produced with high mercury concentrations, where the mean mercury concentration after blending remains close to 3,300 ppbw.

Salvá and Gallup reported the results of the only commercially operated upstream mercury removal plant (MRP) for crude oil. The authors stated that despite the availability of technologies for mercury removal from liquid hydrocarbons, most of them are applicable to refinery product streams. Proprietary technologies exist for upstream removal of mercury from crude oil, but there are no available data for actual industrial applications.

Developed by Petrobras Argentina and Unocal (now a subsidiary of Chevron), the onshore MRP began operation in 2006 in southern Argentina. The processes used in the MRP were originally patented by Unocal and licensed to Petrobras.

Darrell Gallup, consultant at Thermochem, previously served as senior consultant at Unocal and holds several patents related to the processes used in the Petrobras MRP. He said a driver for the removal of mercury from crude oil was the growing trend by refiners to apply a discount of USD 2/bbl when purchasing crude oil containing more than 100 ppbw of mercury. “A few years ago, the discounts were more than USD 20/bbl,” Gallup said. “The goal is to achieve 25 ppbw or less because refiners are shifting from applying discounts to paying a premium on the cleaner [lower mercury content] crude.”

Most of the mercury species are not stable and undergo changes in their physical states and chemical compositions as they go through the processes in the production system. The metallic form is the predominant form at the wellhead in the southern Argentinean fields. Mercury drops are frequently observed in the gas separator equipment. Metallic mercury is a liquid at room temperature, but may remain in the vapor phase at reservoir conditions. During the lifting process from the bottom of the well to the production gas/liquid separator, the product stream is often cooled down. Small drops of mercury are condensed and tend to coalesce and form larger drops in the separator. The larger drops tend to separate toward the water phase in the dehydration tanks. The smaller drops remain suspended in the hydrocarbon phase, producing the observed contamination of the export crude oil (Fig. 2).

Drops of elemental mercury condense and adhere to the walls of the pipelines and vessels, creating mud deposits in association with other solids, such as oxides, sand, and clay. The mud deposits are released or removed by the use of cleaning pigs, causing an increase in total mercury content at downstream receiving facilities.

The mercury removal processes were applied to a blend of black oil and gas condensate that contained an average of 3,300 ppbw of total mercury. Table 2 shows the characteristics of the crude oil treated in the MRP. The treating capacity of the MRP is up to 6,500 BOPD using a continuous process that operates 24 hr/d. The average mercury content at outlet was less than 100 ppbw. The removed waste material containing residual mercury matter was reinjected in diluted aqueous form to a deep disposal well near the MRP. 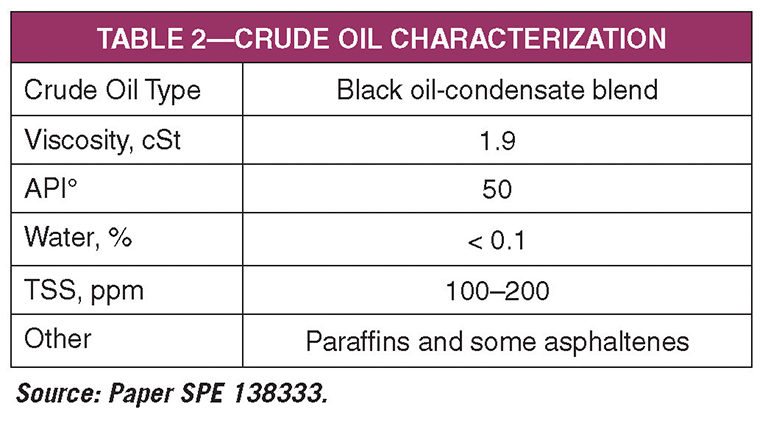 Gallup said the original concept design for the MRP was first pilot tested at an oil storage terminal near the producing oil fields and was based on a patented Unocal method. The process steps are described below:

The precipitated mercury and DE was pulsed into a flow, dropping it into a hopper below the filter. The DE was pushed through a screw conveyor into a produced water stream to create a slurry, which was then injected into an offset injection well.

The final design of the industrial plant incorporated learnings from the pilot plant and was ultimately simplified and did not include the hydrocyclone, chemical treatment, or polishing (Fig. 4).

A slightly sour mercury-free crude oil is produced in the same vicinity as the high-mercury content crude oil. When the two types of crude oil are blended, the mercury sulfide precipitates without the addition of chemicals. A stir tank reactor was installed to ensure that the two crude oils are thoroughly blended to promote a complete reaction between them. The blended crude oil is pushed through the DE filter and is ready for sale without polishing.

The installed MRP successfully treated the crude oil to meet the mercury level requirements for whole export gross sale price. In accordance with Petrobras Argentina health, safety, and environmental policies, the MRP contributed to the reduction of mercury emissions related to the source crude oil fields and reduced the spread of mercury contamination to other sites and sectors of the value chain, such as transportation, shipping, and refineries.

Gallup, who is involved in the continued development of the technology for Chevron licensing, said two additional companies are interested in crude oil mercury removal applications. Both are onshore projects in the Patagonia region and have injection wells for waterflooding and will likely be able to reinject the DE with residual mercury into the reservoir.

A goal in advancing the technology for wider applicability is to reduce the footprint of the mercury removal equipment to allow its installation on offshore platforms or floating storage and offloading vessels, Gallup said. “We are trying to miniaturize the process. One idea, for which a patent has been filed, is to add bulk iodine to the crude oil to oxidize the mercury from an elemental to an ionized form. The complexed ionized form will go into the aqueous phase during separation, instead of remaining in the oil phase.”

A water treatment system would remove the small amount of highly concentrated mercury precipitant, which would be sent to a hazardous material facility.

Gallup said that sludge with residual mercury has been used as an augment for cement. Mercury residual precipitant is encapsulated by combining sand, aggregate, and cement to make a beneficial use product. “We have used sludge from sources other than this crude oil mercury removal process that had mercury and other metals in it for cement. We have a special formulation that allows it to be included in a nonshrinking cement that passes California’s stringent regulatory standards better than many types of shrinking cements.”