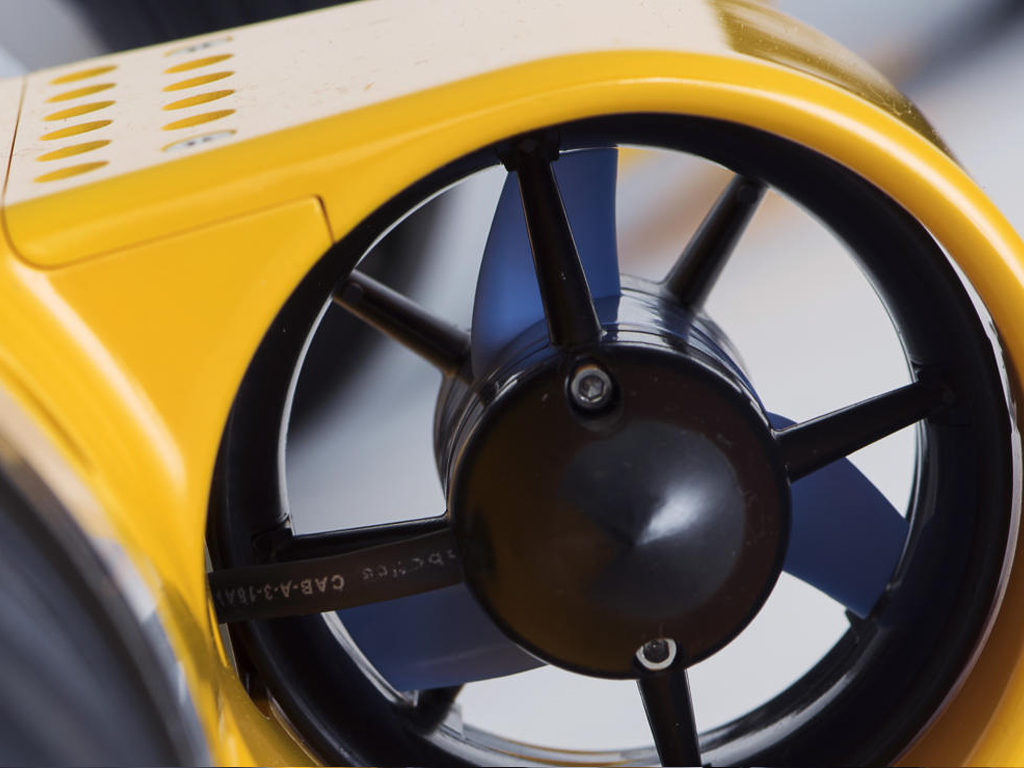 The Eelume is a resident AUV currently in development to help operators handle inspection, maintenance, and repair (IMR) situations subsea. The robot has a modular design that allows it to change shapes depending on the task it is performing. Source: Eelume AS.

Autonomous underwater vehicles (AUVs) are not a new technology by any means. They have been in use since the 1950s, and have assisted with oil and gas operations for the past 4 decades. But even though a familiar technology, they are fast becoming accepted these days as highly useful data-gathering platforms within the industry, as developers push their depth and range envelopes.

Westwood estimated in a recent report that AUV demand will grow aggressively through 2022 in large part because the industry has begun adopting AUVs for life of field inspections.

As developments move to deeper water, nonautonomous vessels needed to inspect subsea infrastructure will become more complex, making the cost savings from AUV inspections more palatable for operators, according to the report.

“From a service provider perspective, what interests us is the fact that there are a billion different techniques and platforms you can use for oil and gas, be it for exploration with collecting geophysical and geochemical tools, drillpipe with using measurement and directional drilling tools, having a vessel that performs surveys, and other things we are used to. Here we have an opportunity to use similar platforms.”

Westwood said it had previously expected AUVs to generate more demand in offshore wind operations, but that has not been the case heading into this year. Most offshore wind developments are close to shore in shallow water, which it argued was not the “sweet spot” for AUV use, particularly if other surface vessels like inspection or work-class remotely operated vehicles (ROVs) sat redundant.

Daniel De Clute-Melancon, quality and technical manager of the US region at Weatherford and chair of the SPE Unmanned Systems Technical Section, said at OTC that unmanned vehicles help industry with a number of “dull, dirty, and dangerous” tasks operators often encounter in a subsea environment. AUVs and autonomous service vehicles are the starting point for larger autonomous cargo delivery systems.

“The oil and gas industry has been adopting these technologies. Everybody here has a car. We use them. We drive them manually or semi-autonomously. The active cruise control feature is semi-autonomous. We’re not that far off the road from autonomous vehicles transforming this industry,” he said.

One of the key areas Pai mentioned potential for future market growth was IMR (inspection, maintenance, and repair). He said there were differentiations to make when analyzing IMR potential, the first being deployment efficiency. Deployment costs are critical, so operators must make sure they can operate this technology effectively with a minimal crew. The second differentiation is in the AUV’s ability to use either cellular service (where available) or satellites to ensure remote communication.

Pai said that, in this case, the definition of “remote” is situational, and higher visibility enables an AUV’s operational capability regardless of location.

“We can use multiple assets in various modes,” he said. “You have next-generation sensors, using other technologies to give you a much better idea of what is happening thousands of miles down there, hence you get better data quality into what is happening.”

A February report from BCC Research outlined some of the challenges AUV builders face in this area. Counterintuitive hydrodynamic response, poor visual capabilities, complex sonar interactions, communications inaccessibility, and power endurance in an underwater environment are significant design constraints, and a variety of artificial intelligence processes must be incorporated for some of the complex tasks

Pai said resident AUVs will be a good way to overcome remote communication challenges. Fig. 1 illustrates the difference between a resident AUV and a traditional ROV system. ROVs are remotely powered and controlled from a surface IMR vessel by a tether management system. Resident AUVs are battery-powered, free-flying vehicles that either operate autonomously or are wirelessly controlled via transponders, typically on a subsea production system. Furuholmen et al. (2013) wrote that the faster response time and increased situational awareness helps lower operator risk, and lower intervention costs can remove or reduce the need for ROVs.

Resident AUVs can be stationed on the seabed for lengthy periods of time and respond immediately to IMR requirements at a minimal cost, according to Furuholmen et al. They can be controlled either from a platform or an integrated operations center. Pai said operators can also develop a centrally located remote center to operate resident AUVs on multiple fields.

“The idea here is that we’ll have communication of various assets [subsea] which then go down to a central hub, and that central hub allows the unmanned vehicle to go and be in close proximity, yet be smart enough to ensure that things like collision avoidance are taken into aspect. It transmits acoustic communications on demand. You can essentially tell it to go to various places or come back to the docking station,” Pai said.

While ROVs are still needed for energy-intensive tasks such as subsea repair and construction, resident AUVs can perform multiple tasks currently performed by traditional AUV systems, such as pipeline inspection and seabed mapping.

Resident AUVs have been in development for much of the past 5 years, and they figure to be a significant driver of vehicle demand moving forward. BCC predicts that resident AUV systems will see increasing deployment in the inspection of subsea assets.

One such system that is close to commercial release is Eelume, a modular, flexible robot capable of swimming like a snake or being propelled by conventional thrusters. Established in 2015 as a spin-off from the Norwegian University of Science and Technology, Eelume vehicles are modular combinations of joints, thrusters, and various payload modules. A joint module enables the vehicle body to change shape, and a lateral thruster module allows it to produce thrust forces in lateral directions with respect to the vehicle body.

Parent company Eelume AS entered a deal with Statoil (now Equinor) and Kongsberg to produce resident IMR robots for oil and gas operators in 2016. Since then there have been three iterations of the robot developed with the ultimate goal of commercial release.

Kongsberg performed several sea trials of the initial prototype in 2016, which versified the functionality and underlying design concepts of the vehicle. A second-generation vehicle was demonstrated last year. It was capable of diving to 1,640-ft water depth and proved the concept of the technology’s self-propelled robotic arms in completing IMR tasks. Kongsberg said it was capable of operating torque tools by exploiting its two-armed design: one arm can grab hold to fix the vehicle in place, while the other operates the tool.

The third-generation Eelume, scheduled for commercial release this year, will be capable of tether-free operations. Kongsberg said it will be equipped with internal batteries and on-board processors, which should enable the vehicle to move autonomously between structures. When close to a template, the vehicle will connect wirelessly with high-bandwidth bidirectional communication, after which an operator can take control of it. The long-term plan for the technology is to have it remain in situ for up to 6 months at a time. Kongsberg said this will require a flexible design that includes storage for swappable tools.

In their paper, Furuholmen et al. wrote briefly about Arctic exploration, stating that it was unclear how to respond to the specific challenges the region presents—parts of the Arctic are covered with ice for up to 9 months—in terms of IMR operations and subsea production system availability. This was in 2013, when AUV and ROV design was in a much different stage of development. Commercial interest in Arctic exploration has declined since then, but companies are still looking at vehicles that can navigate the tough terrain.

In June, Aker Arctic announced a successful demonstration of an autonomous ship model at its ice model test facility in Helsinki. In the demonstration, the model was able to detect obstacles in an ice tank using onboard sensors, maneuver around them without operator input, and moor itself automatically to a target pier. The model had an autonomous navigation system that routed the vessel around obstacles detected by its onboard sensors, along with battery-powered propulsion units and data transfer to a shore facility.

Aker said the test was carried out in ice-free waters, but the test puts the company in line for further development of autonomous ships.

Speaking at OTC, Susan Nash, director of innovation and emerging science and technology for AAPG, said AUVs should play an even greater role in exploring new territories moving forward thorough the collection of representative samples for seabed seep surveys. This is not a new area of interest—the first study to use an AUV survey for identifying hydrocarbon seep features was published in 2007 (OTC 18556) but Nash said there was potential for more widespread use in this area as operators look for ways to sense if oil will be sufficiently mature as to be viable in the reservoir that are more cost-efficient than directional drilling.

“The more you understand about one field that’s on one side of the Atlantic, the more you have the potential to find those mysterious hidden beasts, the elephant across the ocean,” she said. “That’s what people have found in the case of Guyana, and now we’re finding things off the coast of Belize, we’re finding things deepwater. It’s just huge for the opportunities right now.”

The Rovuma LNG project was expected to reach FID later this year, with startup in 2025.

The successful string test comes 7 months after the company's FID on the Calcasieu Pass LNG project.