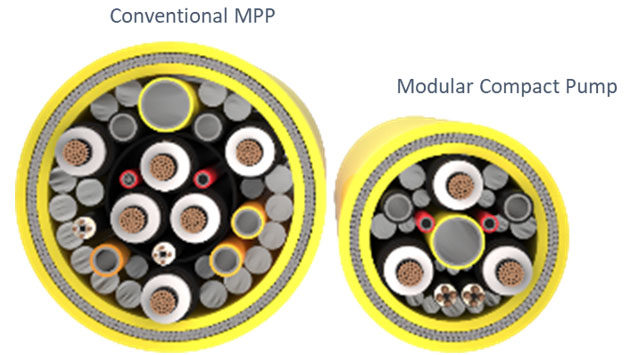 The latest entrants into the efforts to advance toward barrier-fluid-less subsea pumps are Saipem and Curtiss-Wright Corp., who signed an exclusive cooperation agreement for the development of the pumps for water treatment and injection applications.

Barrier fluid is pressurized lubrication oil that is controlled and adjusted to maintain optimized operating conditions of the pump by keeping a constant pressure over the pump seals. The elimination of barrier fluid is sought to reduce costs by reducing the need for topside hydraulic equipment, the complexity of the umbilicals, and for HSE benefits.

The development of the Saipem/Curtiss-Wright pump will be derived from technology used by Curtiss-Wright in the nuclear sector. To qualify this technology, the companies will develop, build, and test a full-scale prototype aiming to achieve an all-electric strategy to replace conventional hydraulic umbilicals with power/control cables in subsea processing applications. The technology can be beneficial both for subsea desulfation technology co-owned by Saipem, Total, and Veolia, known as SPRINGS, and for Saipem’s subsea processing technologies.

Going Barrier-Fluid-Less is No Easy Task

A technology nearing commercialization is Fuglesangs Subsea’s (FSubsea) Omnirise MiniBooster, which was an OTC Spotlight on New Technology Award winner in 2017. The Norwegian company said the pump is designed so that it doesn’t require any mechanical seal or barrier-fluid system and is easy to hook up to an electric subsea variable-speed drive system. The core and proprietary technology of the 400-V centrifugal boosting system was qualified in 2014 and 2015 and is available commercially for a variety of subsea boosting and circulation applications.

In January, Equinor joined Aker BP, Lundin, and National Oilwell Varco in the Research Council of Norway’s Demo2000 joint industry project, which aims to bring the Omnirise single-phase booster to market next year. ConocoPhillips joined the JIP in June.

In a technical paper (OTC 28658) written for presentation at OTC in May, Baker Hughes, a GE company (BHGE), discussed its progress in developing a modular compact pump (MCP) after testing a small-scale three-stage prototype during the second half of 2017 in a multiphase flow loop in Bari, Italy.

The paper said that operators see challenges for future boosting systems which are not currently solved by conventional systems, such as being able to provide sufficiently high boost for deep, long tieback fields, as well as avoiding a barrier-fluid system. The MCP is being developed within a joint industry project with majors Total, Shell, Statoil, and Chevron supporting the first phase.

The authors wrote that the MCP differs from a conventional pump by not having a motor in one end driving a long rotating shaft, but instead having a separate permanent magnet motor integrated with each impeller, all impellers rotating around a static shaft.

The absence of a rotating shaft eliminates the rotor-dynamic challenges of a conventional pump. This also enables a canned motor, removing the need for a mechanical seal around the rotating shaft, a component which commonly affects the reliability of any rotating equipment. Therefore, the pump has no barrier-fluid system. In theory, the modular concept may allow for stacking of an unlimited number of stages to deliver the high boost required by some operators in ultradeep waters.

The BHGE prototype had a total power of 3×110 kW and included all the features needed to prove the concept: integrated rotor-impellers, individually controlled stages, modularity, and process lubricated bearings, according to the paper.

Testing of the pump’s ability to continue operation with a single stage failure was done by running one impeller in a locked position, unable to move, and with one impeller in a free spinning mode. The pump was able to generate pressure through the pump in both instances.

Based on the test results from the performance of the single locked impeller, a simulation was made on what the impact would be for a 12-stage pump, with the same small-scale motors. It showed that the loss in head due to one nonoperating impeller can be compensated by running the remaining 11 impellers at 10% higher speed, which BHGE said proved the inherent redundancy in the MCP concept.