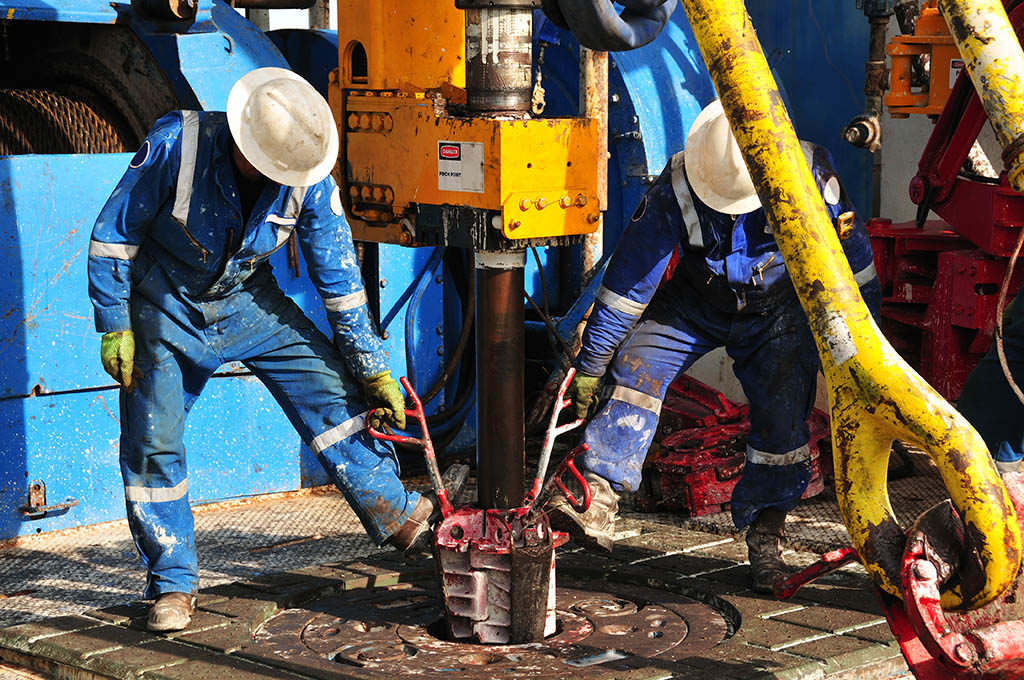 Though operator capital expenditures are down from Q4 2017 due to typical seasonality, the oilfield services and equipment (OFSE) market activity is strong. Over the same quarter in 2017, operator capital expenditures are up 25%. North American rig counts are also rising, driven by the Permian’s near-unstoppable growth. The outlook for rig activity offshore North America is more complicated, though recent substantial discoveries in the Gulf of Mexico are undergoing evaluation prior to potential development. A further increase in oil price should stimulate additional investments outside North America, and service companies are poised to take advantage of that.

The Anticipated Growth of US Shale

While overall global supply is stabilizing, much of which is led by OPEC’s efforts, the US has seen continued shale growth. The US Energy Information Administration (EIA) predicted that US shale production would rise by another 145 Kb/d in June, reaching a record-setting 7.18 million B/D. Much of that will come from the Permian, where output will reach 3.28 million B/D, nearly half of total US shale production. Total US crude production has continued to rise, up to 10.3 million B/D in recent EIA data.

The US Gulf of Mexico seems promising for future production, with several majors focusing their efforts in the area. Shell has just reported its sixth oil discovery in the Norphlet reservoir, with 800 ft of net oil pay in the Jurasic Norphlet. Also in the Norphlet reservoir is Total’s major Ballymore discovery, which encountered 672 ft of net oil pay, and Chevron’s discovery of more than 670 ft of net oil pay. Chevron has four additional areas of potential interest—Anchor, Tigris, Ballymore, and Whale—which could be subject to further evaluation and potential development.

As reported in OPEC’s Monthly Oil Market Report, total OPEC production has held firm at roughly 31.9 million B/D since 2016, though fluctuations have happened at the member level. Venezuela played a particularly big role in offsetting increased production from other members, as its production has plummeted to 1.49 million B/D from 1.65 million B/D in Q4 2017. These falling production levels caused production cut compliance to rise above 100%, and OPEC’s decision to boost production ahead of its planned meeting in December highlights how the group is trying to manage oil prices and supply. However, the growth of US production to record levels could undermine OPEC’s efforts thus far. Further complicating the outlook for OPEC production are the recent US sanctions against Iran, which puts Iran’s consistent monthly output of 3.8 million B/D in jeopardy.

Q1 saw oil demand reach 98.1 million B/D, up from 96.5 million B/D in Q1 2017 but down slightly from Q4 2017. The International Energy Agency’s (IEA) forecast for global oil demand growth for 2018 remains at 1.5 million B/D—for a total of 99.3 million B/D—with OECD demand expected to encounter reductions after a spike in Q1 demand due to unseasonably cold weather throughout the US this past winter. Another factor in future energy demand is the trend toward renewable energy. The IEA expects renewable electricity generation to increase by more than one-third by 2022. We also anticipate that approximately 20 million B/D of oil demand will be displaced by 2050 because of the electrification of cars, buses, and trucks in leading regions. We further anticipate that 80% of the global net capacity additions of generation between now and 2050 will be renewable energy sources.

Globally, we are seeing strong rig counts both onshore, with the bulk of new onshore rigs in North America, while we have seen some new offshore rig contracts in Asia Pacific. An area of contention as far as offshore goes is the Gulf of Mexico rig demand. Transocean CEO Jeremy Thigpen is optimistic, stating that “we would not be surprised to see some deepwater activity commencing in Mexico later this year and steadily increasing through 2019 and into 2020.” However, rig counts for Mexico remain fairly stagnant for now, which may be due to the recent Mexican presidential election. Incoming President Andres Manuel Lopez Obrador has implied that he will review existing licensing contracts, causing E&P companies to hold off on development in the area.

Overall, quarterly revenue is down by 4.1% for OFSE companies, the first quarter-on-quarter decrease since Q3 2016. Much of that loss is driven by EPC and integrated services, which have declined by 7.6% and 4.3%, respectively. The squeeze on day rates has been ongoing, despite the increased oil price, which has contributed to this decline and is cause for concern. Still, all areas except EPC are delivering revenue growth over the same time the previous year. 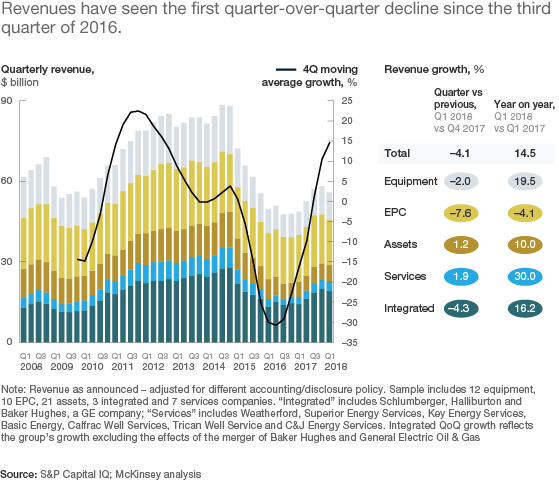 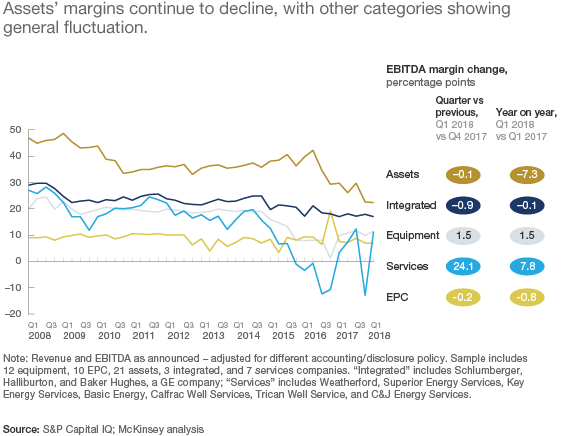 Integrated services revenue is up 1.9% over the previous quarter, and up 30% over the same quarter last year. Schlumberger achieved a 14% growth in revenue over the past year but a 4% decline over the previous quarter. Halliburton achieved $5.7 billion in revenue in Q1, representing a 34% increase compared to Q1 2017, and the company’s CEO credits the robust market for North America shale as the cause. Schlumberger is moving forward with the Eurasia Drilling acquisition, indicating its desire to expand more completely into the Russian market.

Weatherford’s EBITDA is back in shape, which has led to a huge spike in the services margin. The improved EBITDA is due to better product margins benefiting from a favorable sales mix, lower personnel and other support costs, and the timing of revenue and cost recognition related to deliveries in Kuwait.

For assets, total revenue is up 1.2% on the quarter and 10% on the year, while margins were down 0.1% on the quarter and 7.3% on the year. However, total returns to shareholders are down 38.3% since January 2015, the poorest performance by far of any OFSE sector. Looking forward, Jeremy Thigpen foresees a return to higher demand for offshore projects. “If oil prices can remain constructive for the next few months, we believe that operator budgets for 2019 could reflect a return to offshore projects sanctioning for 2019 and beyond as the deepwater space has become a more compelling investment proposition for our customers,” he said.