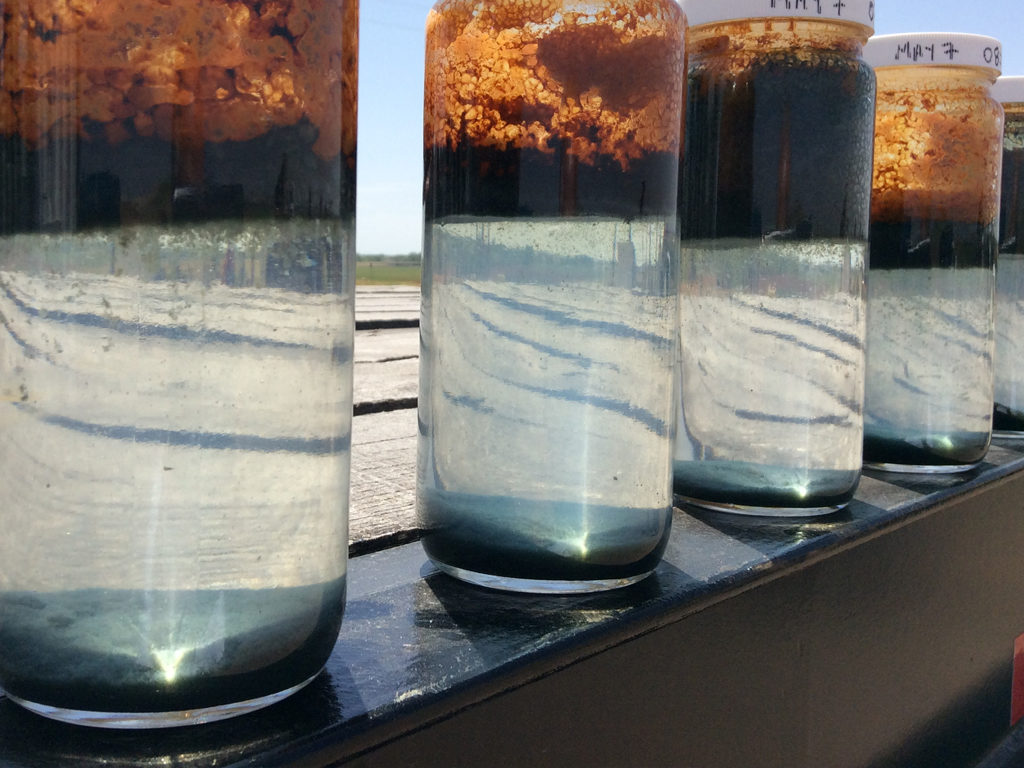 The management of high salinity produced water can make up a significant portion of hydraulic fracturing operational costs, and the search for an ideal method for treating this water for reuse is something that industry has been keen on for years. By reducing the amount of water sent to saltwater disposal wells operators could see noticeable economic benefits, along with the environmental benefits of reduced trucking to transport water for disposal.

The 2018 Unconventional Resources Technology Conference (URTeC) featured a pair of presentations dealing with produced water treatment for reuse, one looking at the Permian and another looking at the Eagle Ford.

Alexandra Hakala, a geochemist with the National Energy Technology Laboratory’s Research and Innovation Center, presented a paper (“Tailoring Treated Brines for Reuse Scenarios”) co-written with Madison Wenzlick and Nicholas Siefert. In the paper, a centralized water treatment facility was designed to be capable of managing produced water from oil and gas wells in Texas and Louisiana through conversion into 10-lb brine and pure water, allowing for operators to either reuse the water or sell the brine to industries that need it, such as fertilizer plants.

Wenzlick et al. (2018) created two models, each using commercially available technology with varying levels of establishment in treating produced water. The authors first considered data from a produced water stream in the Eagle Ford shale, as well as formation water from the Frio formation in south Texas that was assumed to be representative of the composition of produced water.

To determine the necessary pretreatment steps, the researchers used input and output brine chemistries, as well as an evaluation of the effectiveness of current technologies for removing solids, divalent cations, and creating pure salt brine at near saturation. These technologies included mechanical vapor recompression (MVR—the baseline case) and nanofiltration membranes (the advanced case). The authors calculated the net present value (NPV), return on investment (ROI), and total levelized cost for each brine with each technology.

Hakala said that, when looking at brines that are of interest to industries that need a 10-lb brine, the researchers ran into a lot of brines high in total dissolved solids. She said finding treatment technology that could completely remove divalent ions, such as calcium and magnesium, from the brine was a challenge.

“When you look at a lot of the water treatment technologies where you could do a simple evaporation, you don’t get the values that you would want for this 10-lb brine,” Hakala said. “You still end up with a lot of calcium and magnesium in the system, so this is where the concept came in where we asked, if you can treat the water to a point where you can remove the divalent cations, can we do something and have a product that would be of value?”

Fig. 1 shows the results of the economic analysis using various brines with each technology. The least cost-effective case was the Morton brine treated with MVR. Wenzlick et al. (2018) wrote that it had the highest chemical costs of the four brines considered because of a high initial concentration of divalent ions. The Knauss Frio baseline case also had high chemical costs and high MVR costs because of the high salinity of the brine, which theoretically requires a minimum amount of separation.

The Eagle Ford brine had a lower chemical cost, but its low salinity led to a lower volume of brine recovered. This meant that the overall levelized cost, or the NPV of the unit-cost of brine over the lifetime of the asset, was negative. With the Kharaka Frio brine, revenues generated from the sale of brine and water were just sufficient enough to cover the low chemical costs.

The authors conducted a sensitivity analysis to determine what parameters allowed for cost-effective produced brine management through reuse. They looked at key parameters of the treatment process, which included the capital cost, operational costs, management costs, chemical costs, and the revenues from brine and water sales. They found that, in all three baseline cases of the Eagle Ford brine, the chemical cost had the highest inverse impact on the overall levelized NPV, primarily because of the higher concentration of divalent ions.

The correlation between divalent ions and overall cost had significant implications when considering other basins. In basins where the interactions between fluid and rock led to high divalent ion content in the produced water not mitigated by downhole controls, chemical treatment is cost prohibitive.

The sensitivity analysis showed that the tipping fee and the chemical costs had the biggest impact on NPV in all cases.

“That’s really showing that the price of the chemical is really important,” Hakala said. “You can see how having that can really increase the cost factor. Disposable solids can have a big impact as well, especially in these scenarios.”

Wenzlick et al. (2018) found that the nanofiltration membranes were a promising alternative to chemical precipitation as a means of separating out divalent ions, but more research and development may be needed before demonstrating them at the commercial level on high-salinity and high-hardness brines.

Ramesh Sharma, a process engineer with ConocoPhillips, presented a paper (“Systematic approach for developing a ‘fit-for-purpose’ treatment for produced water reuse in hydraulic fracturing”) co-written with Kevin Bjornen on ConocoPhillips’ evaluation of the technical feasibility and cost-effectiveness of various produced water treatment methods. The tests were part of the company’s water management plan in developing its assets in the Permian, a drier climate where the constraints of finding water are well known.

“[Rainfall amounts] make a big difference in how the groundwater recharges, especially with localized activity for drilling and completions,” Sharma said. “Water sourcing is an issue in West Texas and in the Permian.”

ConocoPhillips used a mobile treatment technology for its demonstration scale testing that consisted of a reaction tank, flash mixer, coagulation tank, clarifier, gravity thickener, and a filter press. Sharma said that there were three separate approaches to treatment. Phase 1 involved precipitating the iron as a ferric hydroxide at near neutral pH in an oxidizing environment. Phase 2 involved precipitating iron as a ferrous and ferric hydroxide at pH 9.5 using sodium hydroxide. Phase 3 was a complete removal of hardness ions at pH 11.5 using sodium hydroxide and soda ash; Sharma and Bjornen (2018) wrote that a caustic/soda ash method of hardness removal was better than lime/soda ash because it generated less sludge.

The Phase 1 treatment approach was more cost effective for iron removal compared to Phase 2, and the Phase 1 test generated between 6 and 7 times less sludge than Phase 2. Sharma said that, while Phase 3 treatment can remove more than 99% of hardness ions, it was not an ideal solution for high hardness formation water because of excessive sludge generation and the high chemical costs needed to achieve complete hardness removal.

“We always ask, what is the best way, the most cost-effective way to treat this water?” Sharma said. “Without doing these tests, we would not be able to get the answer.”

ConocoPhillips developed in-house testing methods to screen the potential damage to the proppant conductivity of fractured shale formations due to the fracturing fluids. A fluid damage test helped distinguish between the effectiveness of different fluid and breaker systems, and a rock softening test was developed to evaluate the impact of fluid interaction on the surface using a Nanovea Micro Hardness tester.

The fluid damage tests were performed on raw produced water, Phase 1 produced water, and Phase 2 produced water. With raw water, Sharma and Bjornen (2018) wrote that the amount of potential residue filtered by a thin proppant pack of small proppant was potentially damaging. With the Phase 1 water, the iron-stained residue was eliminated but the hardness remained. Phase 2 water had better results, as the risk of damage was reduced significantly when a high pH fluid was considered. Sharma said Phase 2 or Phase 3 water was the best option in a high pH fluid.

The treated produced water was also shown to have a less negative impact on rock hardness. Sharma and Bjornen (2018) wrote that this finding “makes sense” and should make treatments with properly designed produced water less prone to proppant embedment. It should also result in more conductive fractures than with freshwater alternatives.