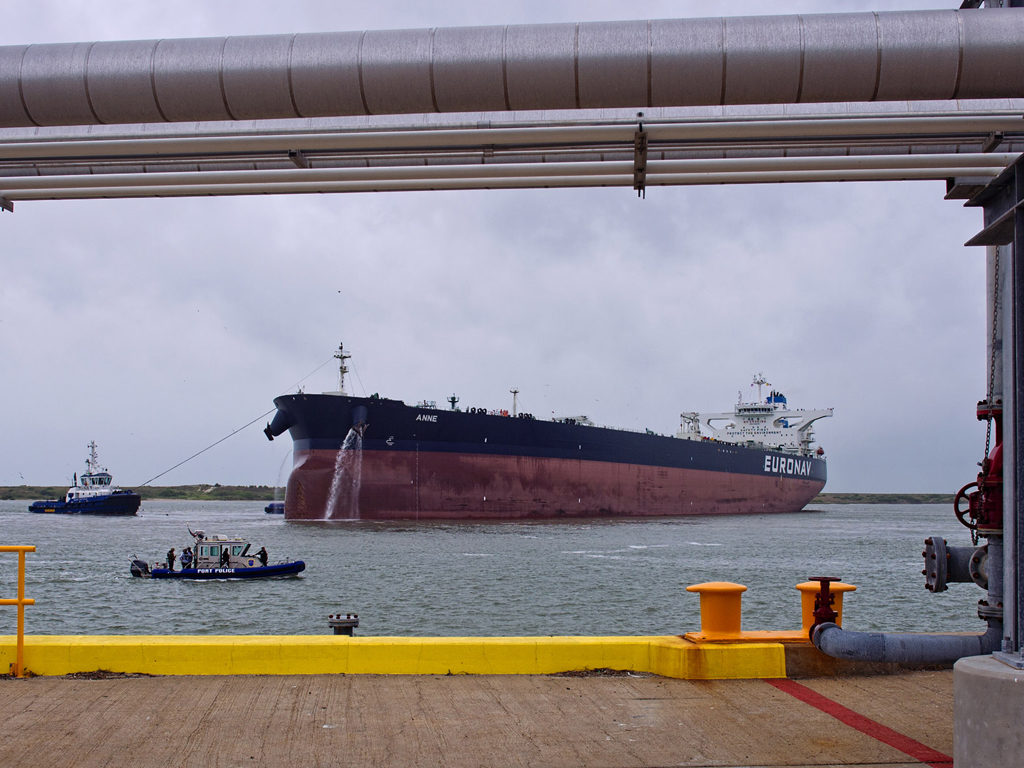 Port Corpus Christi
The VLCC Anne's arrival at Port Corpus Christi last year marked the first-ever docking of such a vessel at a US export facility. If approved, Trafigura's Texas Gulf Terminals Project will allow VLCCs to be fully loaded through an SPM buoy system.

Trafigura, a global commodities trader, announced this week that it has applied to build an offshore deepwater port facility that could lead to a boost of the already rising total of US crude oil exports.

The proposed Texas Gulf Terminals Project, which would be built in Corpus Christi, Texas, is designed allow Very Large Crude Carriers (VLCCs) to be fully loaded through a single-point mooring (SPM) buoy system. Trafigura said in a statement that SPMs will eliminate unnecessary ship traffic in inland ports as well as the “double handling” of the same crude oil, reducing the opportunity for spills and emissions each time the crude is transferred. Once built, it said the facility will ease infrastructure barriers to crude exports.

The US resumed exporting crude oil in 2016, after a 40-year ban on exports was lifted in the wake of surging US production coming from the shale oil boom. According to the US Energy Information Administration (EIA), US crude oil exports reached 3 billion B/D near the end of June. However, exports are still constrained by a lack of adequate infrastructure. No US inland ports are currently capable of fully loading a VLCC, which can carry up to 2 million bbls of crude per trip. Because of water depth restrictions, most US ports can only handle the 500,000-barrel capacity AFRAMAX vessels, while some can handle SUEZMAX vessels, which can carry up to 1 million bbl at a time. To fully load a VLCC, smaller vessels typically have to carry crude offshore before performing ship-to-ship transfers.

Last year, the VLCC Anne became the first such vessel to dock at a US export facility. Port Corpus Christi had to dredge a channel to connect it to the US Gulf of Mexico (GOM), and the vessel did not leave with a full load.

Trafigura said submitted a permit application to the Marine Division of the US Department of Transportation on 9 July. The proposed facility would include an offshore terminal connected via pipeline. The SPM would have a capacity of 500,000 B/D.

Trafigura is not the only company exploring export facilities in the GOM. Enterprise Product Partners announced last month that it is planning to develop an offshore crude oil export terminal on the Texas coast.