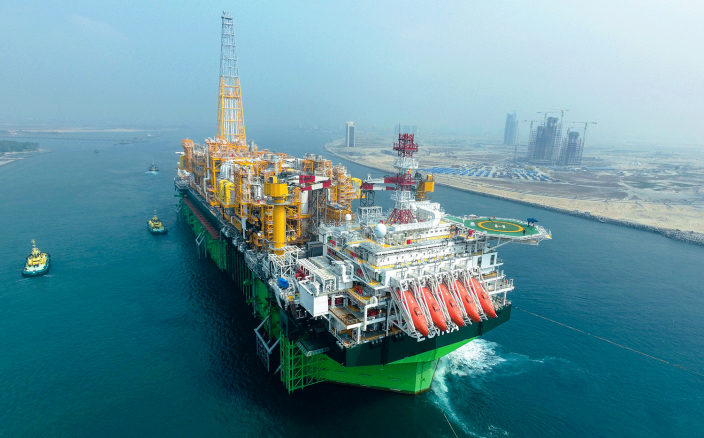 The newbuild FPSO was towed from South Korea and arrived in Nigeria in late January for final integration of the topsides modules, which were built in Lagos. Once the FPSO arrives at the Egina field, Aqualis Offshore will manage the position-keeping procedure and provide position-keeping masters offshore while it is being connected to the pre-installed mooring spread. The FPSO will be spread-moored on 16 mooring lines.

“We are no stranger to installing large offshore structures,” Phil Lenox, Asia Pacific director for Aqualis Offshore, said in a statement. “We look forward to supporting SHI and Total with Egina, which is a challenging deepwater field development.”

Egina is located approximately 81 miles off the Nigerian coast at water depths of more than 4,900 ft. Total is the operator and holds a 24% ownership stake, while NNPC, CNOOC, Sapetro, and Petrobras also hold ownership stakes in the project. Drilling began in December 2014 and production is expected to begin at the end of this year.

Total said the project is based on a subsea production system connected to the FPSO, which has an approximate oil storage capacity of 2.3 million bbl of oil. Once construction work is complete, it will be connected to 44 subsea wells and is expected to produce 200,000 BOPD. At 1,082 ft in length and 220,000 tonnes in weight, the Egina FPSO is the largest ever built by Total.