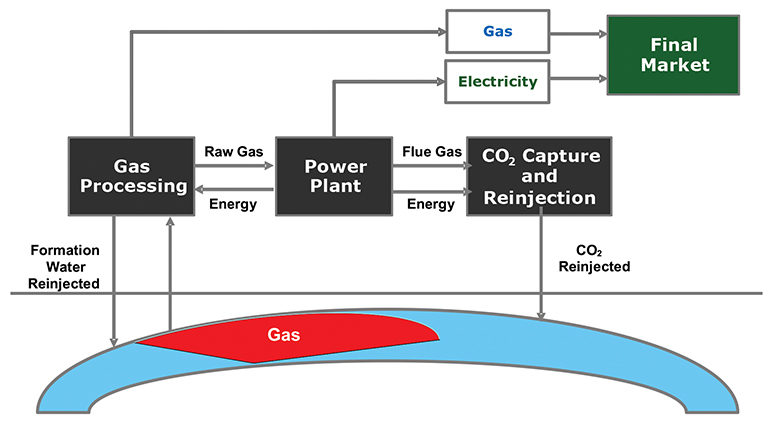 Natural gas, coupled with carbon capture and storage (CCS), could be a cheap and reliable low-carbon energy source in the long term and a critical technology for climate change mitigation while delivering sustainable power. Gas-to-wire (GTW) is the process of generating electricity from natural gas at or near the field, different from producing electricity at a centralized power plant. This paper presents the results of a prefeasibility study of applying an integrated GTW/CCS scheme to a gas-production field.

In the GTW process, a gas turbine is placed close to the field and all or part of the field production is directly converted into electricity for use onsite or for sale to the local market. This production scheme is completely different from the traditional one because the natural-gas turbine is close to the fossil-fuel fields, regardless of whether they are far from or right next to the consumer market.

For a low-emissions process, the carbon dioxide (CO2) produced by the power plant can be captured, injected, and stored underground.

The GTW scheme can be particularly useful for marginal fields and associated natural gas development when volumes available are too small (between 10 Bcf and 1 Tcf) to be exploited by use of traditional transport technologies. GTW can have economic and environmental merits, too, especially if the CCS process is associated with it.

The application of GTW could help solve the natural-gas-flaring problem, especially if the natural-gas field or the associated gas is located far from the consumer market.

Fig. 1 (above) shows a simplified scheme of GTW, including the process of capture, injection, and storage of the CO2 emitted by the power plant.

The integrated GTW/CCS process can be summarized as follows:

For this exercise, combined-cycle-gas-turbine (CCGT) technology is used for the gas-to-power conversion because of its high efficiency, which allows better exploitation of the natural gas resources, although at higher costs. The CCGT system, in fact, includes one or more gas-turbine modules coupled with a heat-recovery steam generator, where additional power is produced from the hot exhaust gas from the gas turbine that otherwise would be discharged into the atmosphere. Typically, two-thirds of the power is generated by the gas turbines and one-third is generated by the steam turbine.

In addition, CCGTs have reduced startup times, are able to respond quickly to changes in electricity demand, and may operate at reduced capacity with limited reductions in efficiency. Additional benefits are associated with low CO2 emissions—300–400 g CO2/kW-h vs. 700–900 g CO2/kW-h for coal-fired plants—and with reduced emissions of all other air pollutants that are emitted at fractional levels compared with other combustion-based power-generation systems.

Compared with coal-fired plants, natural-gas plants, in general, are more flexible to technical and environmental factors. Nevertheless, the plant selection is a function of different parameters, the main ones being the natural gas volume available, its composition (gas turbines are more sensitive to acidic gases compared with reciprocating engines and microturbines), its pressure (gas turbines need a fuel-compression system), and the geographical location (efficiency derating, depending on environmental conditions, could penalize gas turbines more than reciprocating engines and microturbines).

Three technologies, at different maturity levels, are currently applied for capturing CO2 from a point-source emitter.

Three options exist for the storage of CO2. Geological storage is the most common, while oceanic and mineral storage are less viable for economic and environment reasons.

Depleted oil and gas fields (DOGFs), saline aquifers (SAs), and unmineable coal seams are the alternatives available for geological storage. DOGFs are safe sites for confining CO2 because they held oil, natural gas, and CO2 for ages. SAs are promising, with important storage capacity worldwide, but less is known about them. Unmineable coal seams have poor storage potential.

CO2 captured and used for enhanced oil recovery can remain stored permanently in the reservoirs, with approximately 50–60% of that injected being retained. This option combines environmental benefits with economic advantages.

Because the electricity produced by power plants is usually AC, it must be converted for transmission by DC. AC electric power enters the system, where it is converted to high-voltage AC by use of standard AC transformers before finally being converted to DC by use of a circuit referred to as a rectifier. Electricity is then transferred through the DC power cables and converted back into AC by an inverter.

GTW is a mature and consolidated technology, potentially competitive in the case of stranded natural-gas assets, for gas-flaring management, and for fields next to existing electricity-transmission lines. In developing countries, it can be a means to provide energy access to local populations.

Natural gas is a low-carbon fuel, and its sustainable use could be improved by coupling a CCS process to a power plant to capture the CO2 produced and store it underground. CO2 transport and storage costs consequently would be reduced, and, because everything remains confined inside the field and the only output is electricity, the NIMBY effect would be limited.

Equinor Technology Ventures and OGCI Climate Investments have agreed to back the tech developer, which integrates its SeekIR miniature gas sensors onto drones to detect, localize, and quantify carbon emissions.

The Grand Challenge of Carbon Capture and Sequestration

Even with the wealth of experience already in place within the oil and gas industry, the obstacles to advancing CCS to the forefront of greenhouse gas mitigation technologies remain significant.

A pilot project demonstrates that facilities design plays an important role in providing sources of CO2 for the gas-handling process for injection into a carbonate formation as a tertiary recovery mechanism.