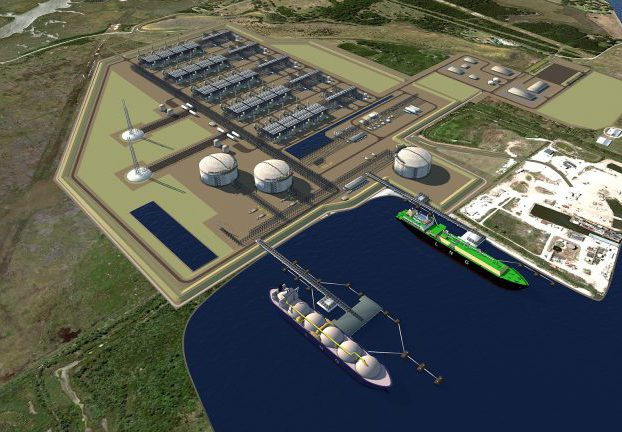 Tellurian
The Driftwood LNG terminal will have the capacity to produce 27.6 mpta of LNG upon startup, which is scheduled for 2023.

Tellurian remains on track to begin construction of the Driftwood LNG export terminal in Louisiana next year with an eye on a 2023 startup, according to a recent report from Reuters. Tellurian is on schedule to announce its partners in the $27.5-billion project sometime in the third or fourth quarter of 2018, company president and CEO Meg Gentle said in the company’s second-quarter earnings release.

Reuters reported that, unlike most other proposed US LNG export projects where gas is liquefied for a fee, Tellurian is offering potential customers the chance to invest in a full range of services from production to pipelines and liquefaction.

The company said it has about 25 customers interested in partnering with and buying gas from the project. Driftwood will have the capacity to produce 27.6 mpta of LNG upon startup, and Tellurian will offer equity interests costing approximately $1,500/tonne. Variable and operating costs are expected to be around $3/million Btu FOB, including maintenance. Tellurian will retain about 40% of the assets.

Bechtel has a $15.2-billion engineering, procurement, and construction (EPC) contract for the export facility. Total and GE are also partners on the project.

The Driftwood LNG terminal will be constructed on a 1,000-acre plot of land near Lake Charles, Louisiana, just off the coast of the US Gulf of Mexico. It will consist of up to 20 trains of 1.38 mtpa each and 3 storage tanks each containing 235,000 m3 of LNG. Tellurian estimated construction costs of $15.2 billion for the Driftwood terminal and approximately $2.3 billion for the Driftwood pipeline without accounting for owners’ costs, financing costs, and contingencies. The company is also developing the Haynesville Global Access Pipeline and the Permian Global Access Pipeline, which it estimates will cost $5.1 billion combined.

Tellurian said in its earnings release that it has received air permits from the Louisiana Department of Environmental Quality authorizing the construction and operation of equipment associated with the Driftwood terminal, along with a coastal use permit from the Louisiana Department of Natural Resources. The company also said it expects to receive all regulatory approvals by 2019.

The charter agreement for the LNG-propulsion vessels is in line with Total’s Climate Ambition and will cut down on several emissions.

The data has been collected and analyzed from more than 18,000 equipment units with failure and maintenance records and includes information on subsea fields with more than 2,000 years of operating experience.

Evacuations in the GOM began on Monday, but so far nearly 50% of current oil production and 55% of natural gas production in the region is shut-in due to Tropical Storm Zeta.