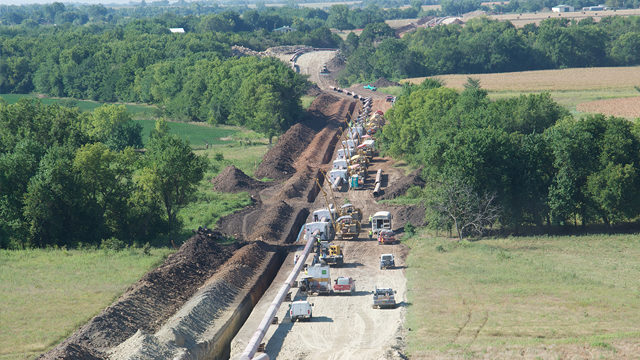 A US federal judge blocked the Keystone XL pipeline on Thursday, saying the justification provided by the administration of President Donald Trump was incomplete. The US District Court in Montana overturned Trump’s permit for the pipeline, which the president signed shortly after taking office last January as part of a plan to boost US energy infrastructure.

The decision comes after a lawsuit filed by several environmental groups against the US government in 2017. District Court Judge Brian Morris ruled that the government failed to complete a full analysis of the environmental impact of the project, writing that the State Department “simply discarded” climate change concerns related to the project and “fell short of a ‘hard look’” at the cumulative effects of greenhouse gas emissions and the impact on Native American land resource.

Morris also said in his ruling that the analysis failed to fully review the effects of the current oil price on the pipeline’s viability and did not account for the risk of oil spills or the cumulative impacts from Keystone and the Alberta Clipper pipeline. In addition, he wrote that the State Department did not adequately justify its decision to approve the pipeline in 2017 after rejecting it in 2015 under the administration of Barack Obama.

The judge rejected the Trump administration’s argument that federal courts did not have the right to review its approval of Keystone XL, and ordered the government to run a more thorough environmental analysis before the project can continue.

The decision is another roadblock for the 1,179-mi pipeline, which has been a source of controversy since its proposal by TransCanada Corp. a decade ago. The pipeline would carry heavy crude from Western Canada to the Midwestern US if constructed.

Zachary Rogers, a research analyst of refining and oil markets at Wood Mackenzie, said that while the exact legal recourse for the State Department is unclear, this decision will most likely result in an escalation through the courts or an additional department review.

“This is the world’s longest tug of war, with Western Canadian oil prices as the rope,” Rogers said. “While definitely a major setback in terms of timing, this is unlikely to be the nail in the coffin for Keystone XL.”

Rogers said that the decision will be a negative for future market access for producers of Canadian oil sands, who are currently dealing with lagging midstream development.