To Sanction, or Not To Sanction—That is the Offshore Question 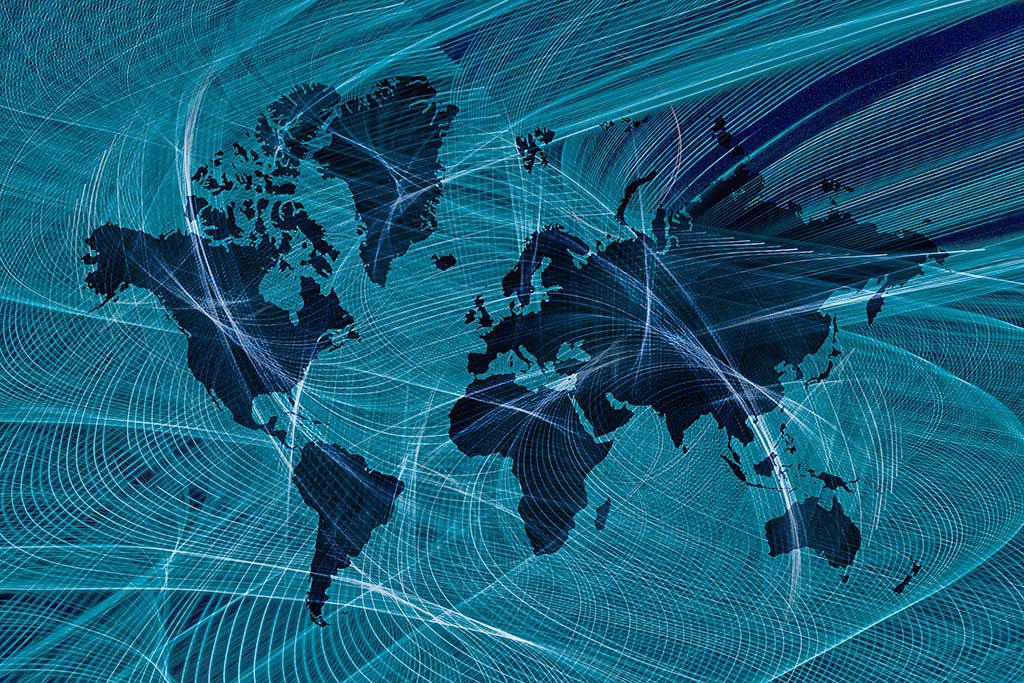 While Hamlet’s famous “to be or not to be” questioned the existential, E&Ps will look to answer more concrete questions this year when evaluating projects for sanctioning. Answering these questions, operators showed patience toward the sanctioning market in 2018. In fact, by patiently allowing projects to slip from 2018 into the new year, 2018 lost out on seeing 25% commitment growth from 2017.

Saudi Aramco’s engineering, procurement, and construction (EPC) bid extensions for the Berri and Marjan Expansion projects alone pushed over $18 billion of offshore commitments from 2018 into early 2019. The additional time will help to ensure that the bidding contractors can focus on their scope and cost-competitiveness. This includes expanding traditional fabrication strategies outside of South Korea, and evaluating recent improvements from yards in India, China, and the Middle East. Funding both of these projects would make Saudi Aramco the operator to fund the largest amount of offshore greenfield work for 2019. However, they will not be the only E&P to bullishly sanction offshore work. 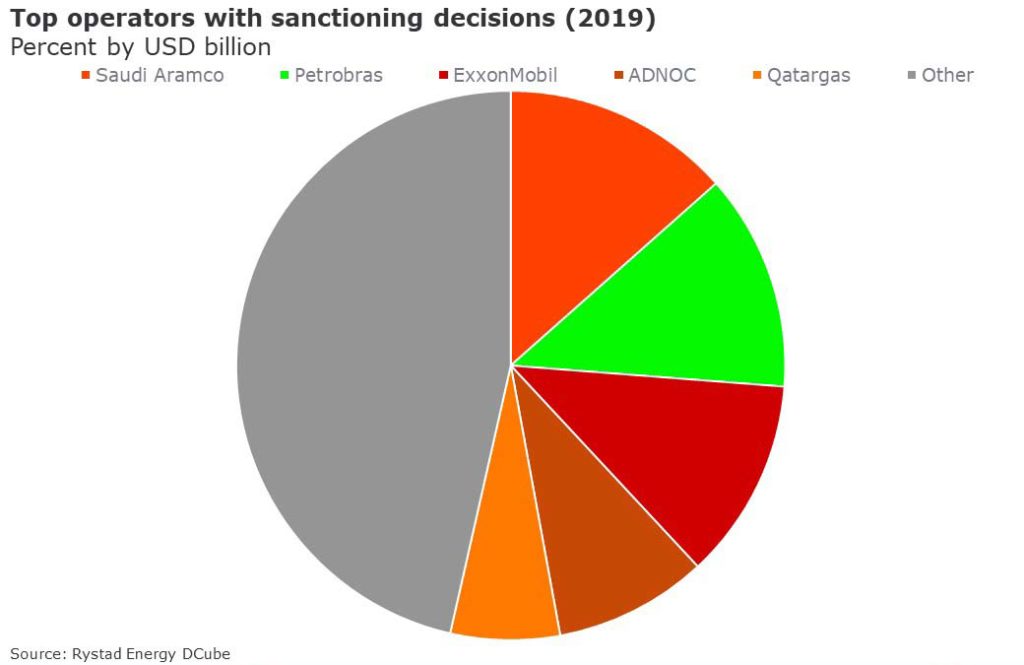 ExxonMobil also looks primed to make an offshore sanctioning splash in 2019. They will be bringing forward over $16 billion of offshore work for sanctioning. In fact, 2013 marked the last year where the supermajor brought forward this volume of greenfield, offshore work for a final investment decision (FID). Continuing their patient, phased approach in Guyana, they will be looking to bring the $10-billion price-tag for two phases of the Greater Liza project (Liza Phase 2 and Payara) forward for sanctioning. This phased strategy is reminiscent of how the supermajor developed the deepwater Kizomba fields in the early 2000s off the coast of Angola. From 2000–2012, six phases of the overall development were approved in a systematic manner that enabled lessons to be applied from one phase to the next. This, in turn, enabled subsequent developments to reduce costs. In addition, with their early works campaign underway for the onshore scope, the Area 4 LNG project in Mozambique looks well on its way to being approved this year.

Not every operator appears to have the same clear-cut sanctioning decisions to make this year. For 2019 to reach its full sanctioning potential of $123 billion in commitments, some projects will need to lower their current breakeven prices. As highlighted in Rystad Energy’s Project Sanctioning Report, nearly half of 2019’s projects currently have breakeven prices above $40/bbl (on a greenfield capex basis). Failure to do so will result in many projects missing out on sanctioning.

Brazil’s Petrobras presents a prime example of an operator that will have important funding decisions to make this year. The company has an offshore portfolio of $17 billion in greenfield projects up for sanctioning in 2019. However, if their recent bid extension on the Mero 2 project was any indication, they will not be paying a premium to chase schedule. In fact, it appears that their bid extension was to ensure SBM Offshore could participate with rivals BW Offshore and Modec International. As SBM Offshore has more local content capabilities in Brazil, Petrobras’s extension will help to ensure its bid round will be as competitive as possible.

Petrobras has also shown sanctioning patience through their ongoing Buzios V FPSO tender. Since being identified as the lower bidder in the first half of 2018, Exmar has been unable to secure financing. Rather than accept second-place Modec’s high day rate and move forward with the project, it appears Petrobras is entertaining a re-bid to try and combat forecasted breakeven prices of over $50/bbl for the project. While sanctioning decisions for most of their portfolio are expected late-2019, they will continue to be challenged by breakeven prices above $40/bbl. 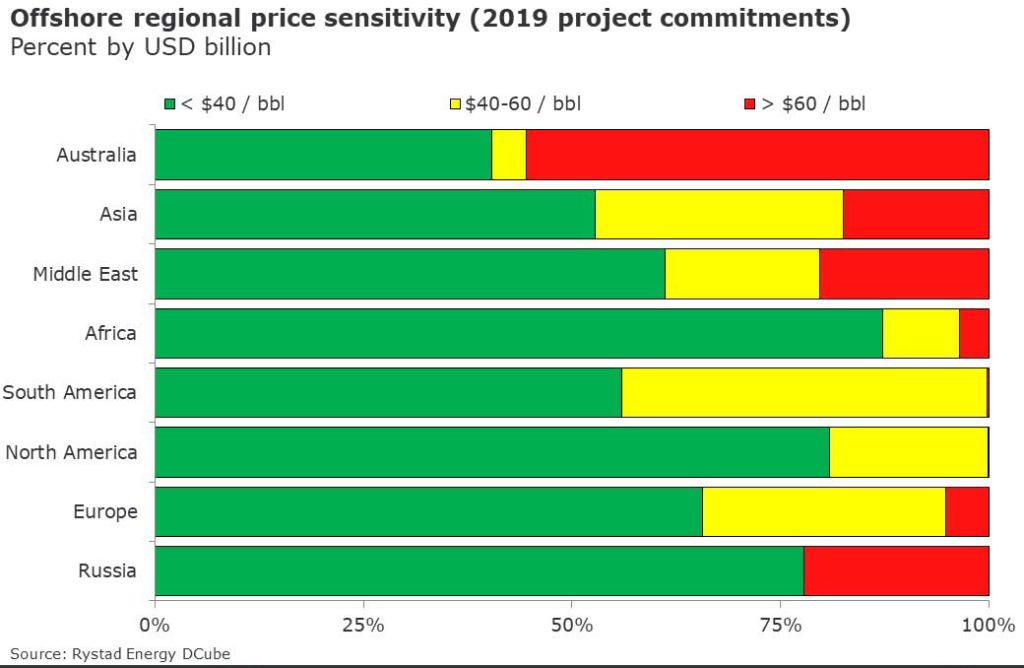 Regionally, South America and Australia hold the highest percent of at-risk projects. On an absolute capex basis, Australia will only look to sanction $2.6 billion of offshore work this year. The Julimar asset, under the Wheatstone development, appears to be best positioned to be sanctioned. Woodside announced back in November 2018 that it would target an FID on the field in the second quarter of 2019. The project team will look to complete front-end engineering design in the first half of 2019 to support the investment decision.

While not all sanctioning opportunities are created equal, 2019 has a solid base of projects that should allow for growth above 2018’s activity level. Saudi Aramco and ExxonMobil alone are well on their way to sanctioning $34 billion of offshore work. In addition, regions like Africa appear to have minimal breakeven price risk for their sanctioning activity. As this year starts off with significant sanctioning optimism, more clarity will be given as operators answer concrete project sanctioning questions.