The Trials of an Ice-Breaking LNG Carrier

LNG carrier Vladimir Rusanov conducted its first loading operation in the Yamal LNG plant at Sabetta, Russia, in March 2018. Before that could occur, the vessel left the Daewoo Shipbuilding & Marine Engineering Co. Okpo yard to head to the Arctic Ocean through the Suez Canal for ice trials. Over 3 weeks, she demonstrated her capabilities before being handed over to the Yamal LNG project.

Vladimir Rusanov’s first cargo arrived at the Bering Strait on 6 July, completing an 11-day voyage along the Northern Sea Route from the Yamal plant at Sabetta. It was bound for Jiangsu Rudong port to the north of Shanghai.

The carrier is capable of sailing in seas with ice up to 2.1 m thick, allowing year-round transport of Yamal’s LNG to worldwide markets. In the summer, it can sail on the Arctic Sea Route to transport LNG to East Asia via the Bering Strait. 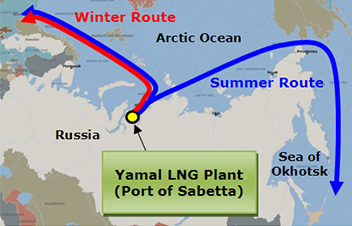