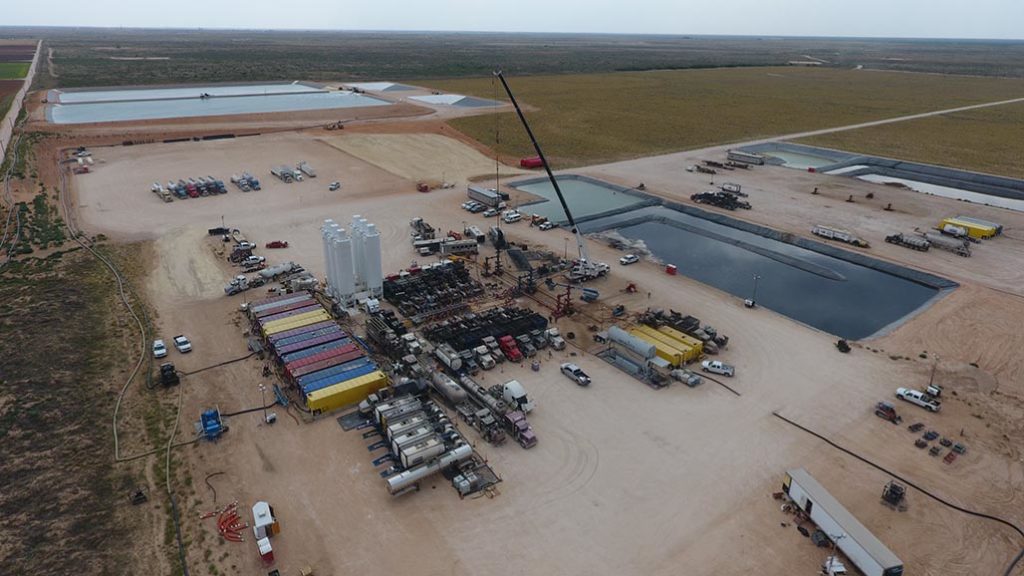 The rising tide of produced water in the Permian Basin is requiring operators to re-engineer how they manage water.

One big difference in the Permian is that water production from unconventional reservoirs exceeds output from most other plays, particularly in the Delaware Basin. Prolific water production has long been a given in conventional fields there, but most of that could be reinjected to maintain production, which is not an option in the ultratight rock.

Instead, billions of gallons of produced water have been pumped into saltwater disposal wells in shallow formations, such as the San Andres, significantly increasing the pressure drillers encounter, creating a hazard for drillers moving in and out of them from lower-pressure zones.

To isolate the higher-pressure zones passed on the way to the Wolfcamp, operators have increased the number of strings of casing used from three to four. The increase adds about $600,000 to the cost per well, said Andrew Hunter, drilling manager for Guidon Energy, which uses the added string to isolate two under-pressure zones.

To maximize produced water use for fracturing, Cimarex has streamlined filtration and chemical treatments of the water in the pipeline system en route to fracture sites, limiting the need for fixed facilities, said Rita Behm, Permian exploration engineering project manager for Cimarex.

Occidental Petroleum is working to manage water production while picking drilling targets. It has developed a detailed evaluation system based on a large company database that predicts production of hydrocarbons and water. High water cuts are a negative in the grading system used to choose where to spend, said John Polasek, vice president of geoscience at Occidental.

All three mentioned the water issue in their presentations at the recent AAPG Global Super Basins conference on the Permian. The comments reflected the importance of dealing with water issues for operators that need to minimize fresh water use and manage injections of produced water.

ExxonMobil’s XTO Energy arm is building a system to “treat produced water and reuse it again and again” to reduce its demand for fresh or brackish water wells, said Staali Gjervik, senior vice president for Permian Integrated Development at XTO.

Addressing the problem will require an industrywide shift. Even if an operator is reusing all of its water, “they can get hammered” by the injections of a nearby commercial saltwater disposal well by an operator that is not finding other uses, Hunter said. “The only way to deal with this is to work cooperatively with other operators,” he said.

When drilling through higher pressures, Hunter said drillers increase mud weight to counter the higher pore pressure in that layer, and promptly adjust it back when the pressure drops.

Through drilling 48 wells in the Midland Basin, Guidon learned how to deal with the challenges associated with the higher pressure in the San Andres. Those include the risk of differentially stuck bottomhole assemblies when drilling goes below the San Andres. The sudden shift to a lower-pore-pressure zone can cause an abrupt fluid loss. That pulls the bit on to the well wall like the force of a drain when a bathtub is emptying, Hunter said.

Rather than using force, the company found that the best way to free a tool is hitting the spot with about 50 bbl of hydrochloric acid to dissolve the carbonate rock to break the seal.

“I am not happy with where this is going. On every well we drill in the future, we will have to deal with this (over-pressure) issue. It doesn’t make any sense,” Hunter said. “We believe the best approach is to recycle all produced water and only use deep disposal wells on a short-term basis while recycling infrastructure is being built.”

Water disposal adds to the drilling issues in the Permian. The multilayered richness of the rock means drill bits travel through a century of all sorts of water-injection projects, plus the Permian Basin goes through major changes. Among those differences is a lot higher water production in the western half of the basin.

In the Delaware Basin, Cimarex wells with water cuts of 80-90% are common. For a section with 12 wells, that is 100 million bbl of water for 12 million BOE. “We will need two saltwater disposal wells to handle that peak,” Behm said.

Cimarex is maximizing reuse by making it as efficient as possible. Rather than building a large water recycling facility and storage pits, it is filtering the fluid and killing the bacteria in it while moving the water to the frac site. This reduces the facilities needed and the risk of pits leaking, which multiple speakers said can be an issue, even with good plastic liners.

Water reuse saves Cimarex the cost of fresh water for fracturing—from $0.60 to $2.50/bbl, depending on the county—but not the cost of injection, Behm said. With water production growing as more wells come on line, “it defers it [injection] by 30 to 60 days. They will have to put it in the ground.”

Due to the problems associated with rising pressures in shallower zones, Guidon and Cimarex are among the companies that have added deepwater injection capacity into the Ellenburger Formation. Cimarex has two injection wells, each permitted to handle up to 90,000 B/D.

The Ellenburger is the same basement-level layer used for injection in Oklahoma, where a surge in seismic activity in certain areas forced the state to curtail high-volume water disposal.

Texas operators are taking steps to reduce the chance of a repeat. Behm said Cimarex has installed seismic monitoring equipment for its five injection wells. In addition, she said a group of operators is informally talking with Texas officials about how to manage injection to limit risks.

Major producers such as Occidental are taking advantage of their huge acreage position to select drilling targets with an eye toward reducing produced water.

Its reservoir analysis system predicts both oil and water production, Polasek said. When choosing which benches to develop, “we try to stay away from the high-water zones,” he said.

Core Laboratories reported at the conference that it is working on rock analysis techniques it can use to model water production, suggesting other companies share their concern.

While salty water can work for fracturing, fresh water is still needed for drilling fluids. Fasken Oil and Ranch, an exploration and development company in Midland—which reuses all of its water for fracturing, injection into conventional zones, and drilling—has begun using reverse osmosis to desalinate water for drilling, said Stonie Pollock, a geologist for Fasken.

Hunter said the commitment to reuse pays off in a relatively short time, but requires a significant investment in infrastructure, manpower, and a willingness to make operational changes during the completion of the well.

Considering the costs and consequences of water disposal and fresh water use on a large scale, he pointed out that the cost of doing nothing is considerably higher.