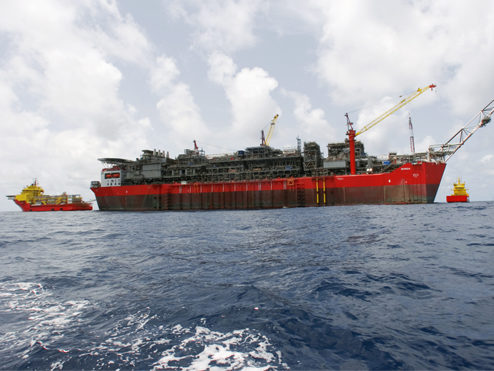 Shell
The decision to invite bidders on Bonga South West/Aparo comes four-and-a-half years after production began on the Bonga North West development in the Gulf of Guinea.

The announcement comes 7 months after Shell and the NNPC received permission to begin the tendering process for the project. BSWA is expected to carry a peak production of 225,000 BOPD by 2022. Final investment decision (FID) on the project was initially set for 2014, but the project faced delays due to a number of factors, including the oil price downturn and high costs associated with deepwater developments. Shell later said it expected to take FID in 2018 but that has been stalled after continued legal disputes between it and NNPC over key commercial terms in their production-sharing contract. First oil is now expected in 2021 or 2022.

BSWA will be the first major deepwater project offshore Nigeria since Egina, which started development in 2013. Bonga North West, which began production in August 2014, produced more than 40,000 BOE/D at peak production. The bulk of Bonga South West’s resources are located in an area referred to as Oil Mining Lease (OML) 118, but it also extends into Chevron-operated OMLs 132 and 140, where the field is called Aparo. Along with Shell and NNPC, Total, Eni, and Sasol Petroleum are partners in the project.

Cao Chai, an upstream oil and gas analyst at GlobalData, said the move on BSWA is a key step toward FID. She said it will open further deepwater opportunities in Nigeria.

“BSWA fits in with Shell’s renewed focus on deepwater projects, with the company sanctioning a significant number of projects in Brazil and the Gulf of Mexico over the past few years. Shell is also well-established in Nigeria with the deepwater Bonga Complex already in production and a large portfolio of onshore assets, most of which were granted license renewals last year,” Chai said.

BSWA is one of several key offshore Nigeria projects that have suffered delays in recent years, along with Shell and Eni’s Zabazaba/Etan project, ExxonMobil’s Bosi and Uge projects, and Chevron’s Nsiko deepwater project.