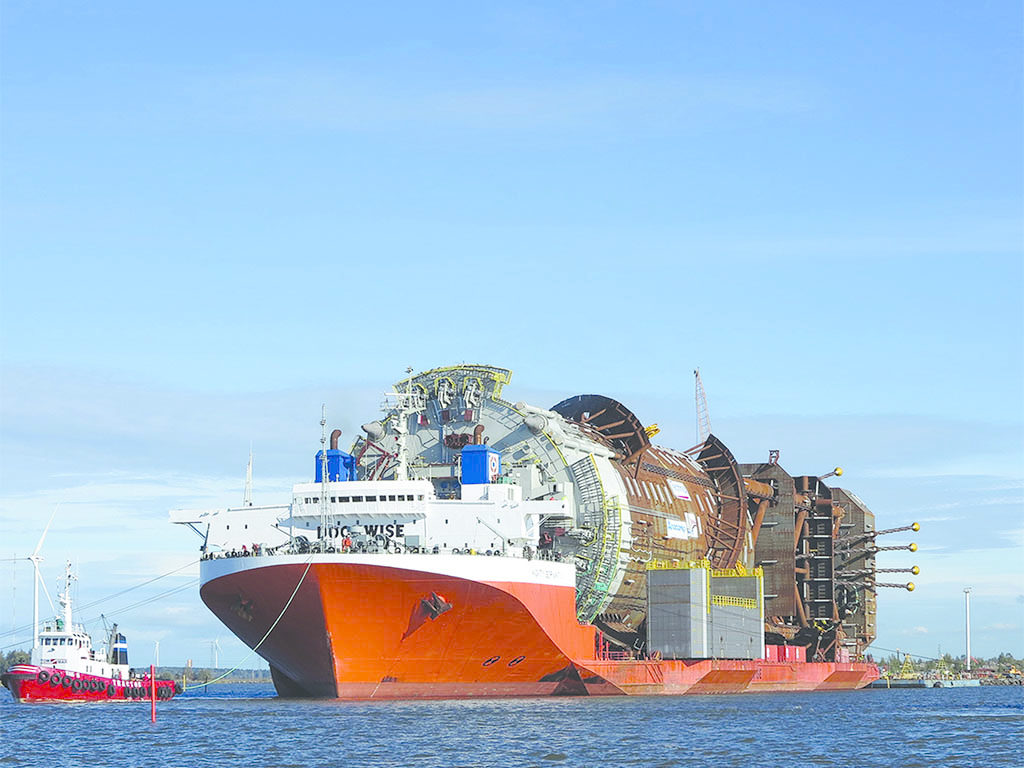 Courtesy of Anadarko.
Fabrication work on the Heidelberg spar hull and load-out was completed in Pori, Finland, during the third quarter of the year. Development drilling is under way, and the project is on track for first oil in 2016.

When people think of innovative design, they picture improving an existing design based on lessons learned, or striking out in a new direction with a disruptive approach. For Anadarko, the secret of the “design one, build many” approach to offshore production facilities is to control its enthusiasm for change. The company’s experience with eight operated spars shows the benefits gained with this approach.

First introduced in the US Gulf of Mexico (GOM) in 1996, the spar production hull has grown in size and popularity because of its simple, scalable design, deep-draft stability, and efficient payload-to-steel tonnage ratio. A distinguishing characteristic is its ability to support dry-tree wells.

The spar design has progressed dramatically over the years from the cylindrical classic spar to the truss spar and the cell spar. The familiar lattice and plate truss-spar design is the most prevalent spar in use. It is the basis of Anadarko’s production spars in the Lucius and Heidelberg fields in the GOM (Fig. 1).

While dramatic to look at, these designs are all about stability and efficient payload. The Lucius spar (moored in 7,100 ft of water in Keathley Canyon 875) and the Heidelberg spar (destined for 5,300 ft of water in Green Canyon 859) each measures 110 ft in diameter and 605 ft in total length (Fig. 2). Both have the same maximum throughput of 80,000 BOPD, but the Lucius has a natural gas capacity of 450,000 MMcf/D, while Heidelberg’s capacity will be 150,000 MMcf/D.

Seven of the company’s spar hulls have been built at the Technip Offshore Finland fabrication yard in Pori, Finland. Don Vardeman, vice president of worldwide project management at Anadarko, said the company sees value in the continuity. The experience gained means individuals can readily transfer lessons learned from one project to the next, while maintaining excellent safety performance.

“There are about 200 people in that yard who have worked on all seven spars we’ve built there. The same workers have built 13 of the 19 spars in use in the industry,” Vardeman  said.

The experienced personnel contribute to the yard’s on-time delivery record. If a spar hull has a reliable delivery date, it can sail on time to make the 23-day trip across the Atlantic Ocean to south Texas, where its final components are assembled and prepared to go offshore. Receiving major components, such as moorings, hull, topsides, and subsea equipment, in a timely manner is critical to the success of a spar-based production solution. Hull delivery is one of many variables that can be controlled and helps build slack into the one variable that no one can influence: the “weather window.”

The weather window refers to the time period when the hull can be delivered within the maximum allowable limits for wave height and wind speeds.

The scalable design allows for the realization of efficiencies in the construction process, even as the dimensions of the hull are increased. This is an important feature, since it is not necessarily the case for other components of the production facilities.

The production throughputs of the Lucius and Heidelberg spars require large equipment on the topsides. The spars will receive production from subsea wells, and the inherent uncertainty of bringing a new field on production means that the topsides design must have flexibility built into it. Flexibility generally means “space,” and in the realm of offshore facilities, space equals weight and weight equals money.

This is where the spar’s efficient payload/tonnage of steel ratio pays off. It is relatively inexpensive to increase the payload of the hull to support both dry trees and larger topsides. The trade-off is that the topsides must be mated to the hull offshore.

Aside from the problems related to weather delays, offshore heavy lifts are limited by the weight capacity of the heavy-lift vessel. The capacity has increased over the years; however, a project such as the Heidelberg spar is limited by the lifting capacity of the vessel fleet available. With the recent surge in facilities decommissioning activity in the GOM and North Sea, the largest vessels are needed for the decommissioning and the installation markets.

A total of nine heavy lifts is involved in mating the topsides to the hulls for the Lucius and Heidelberg spars. The modules must be installed in a particular sequence and set in place as needed based on the construction schedule. This takes place at the field location, miles from shore.

Vardeman said that more than 400 workers will be temporarily housed on an accommodation vessel to coordinate and execute these activities. While he stops short of referring to it as a ballet, he conceded that “offshore installation is choreographed for optimization.”

The complex offshore assembly of the facility benefits from the design one, build many approach. Anadarko retained the major contractors that worked on the Lucius spar for the Heidelberg project because many of the individuals will be doing the same jobs that they performed on the Lucius facility.

Vardeman said the familiarity with the process and the equipment involved leads to a higher “comfort level” for the personnel and increases the safety performance of the Heidelberg project. Efficiency gains will also be realized since questions that might arise likely would have been addressed during the Lucius commissioning.

The company also saw a reduction of 60% in the number of engineering man-hours for Heidelberg compared with Lucius, Vardeman said. The fulfillment time was cut in half and, because many of the systems were identical to Lucius’, certifications by the American Bureau of Shipping for the changes in design between Heidelberg and Lucius were obtained more efficiently.

While the savings from increased efficiency and reduced engineering time are impressive, an advantage of doing the same thing twice was consciously ignored.

Vardeman said that any advantage gained from making a change in the Lucius design for the Heidelberg had to be examined closely. Normally, an incremental improvement is encouraged, but when a design change ripples through the engineering, certification, construction, installation, and startup processes, the change must be materially better in order to be adopted.

Anadarko had to resist its natural “enthusiasm for change,” Vardeman said. In the end, this disciplined approach paid off. Eighty-seven percent of the Heidelberg design remained identical to Lucius’. Change was deemed essential only in the areas of the topsides related to the spars’ variances in production compositions.

A spar design makes use of dry-tree risers, even though the Lucius and the Heidelberg, having only subsea wells, do not use this feature. Vardeman said this offers the company flexibility. Placing the trees topside, rather than at the mudline, allows easy access to the production wells, and allows for the focus on completions and production when designing a spar-based system. The drilling of the wells is taken off the critical path used in scheduling the projects. While the hull and topsides are being built, the wells can be drilled off line by a contracted mobile offshore drilling unit. Once the spar is in place and hooked up, the wells can be completed and brought on line.

The company has experience with a range of offshore production solutions, but over the years, it has come to favor the spar design for its robustness and repeatability, Vardeman said. While these are not the largest or deepest floating production solutions in the GOM, he likes to think the spars will be among the most cost-efficient for the application.

William Furlow is the senior manager of business development at SPE. He can be reached at bfurlow@spe.org.