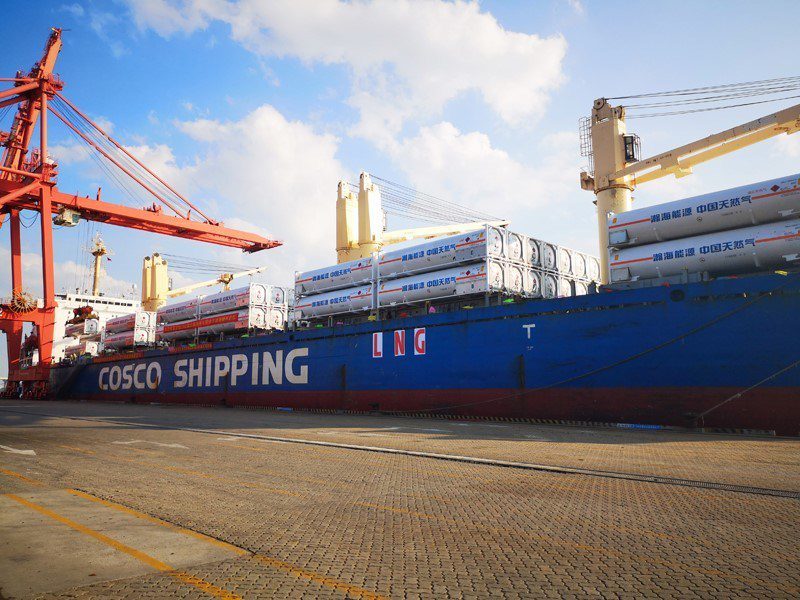 CIMC ENRIC
ISO containers are being considered for transport of LNG to US West Coast ports for shipment to China.

Due to economic expansion and shifting government policy toward cleaner fuel sources, China’s demand for LNG imports has increased significantly and could represent new LNG export opportunities for US companies. From January to October 2018, China imported 41.6 million tons of LNG, surpassing the 39 million tons it imported for all of 2017. China overtook South Korea as the world’s second-largest LNG importer last year.

However, Chinese import terminals and American export terminals lack the infrastructure and capacity needed to fully satisfy China’s growing demand. Intermodal (ISO) containers have the potential to bridge these infrastructure gaps and facilitate easier and more flexible LNG trade between the two countries.

China Energy Reserve and Chemicals Group (CERCG) is exploring the possibility of importing LNG from the US via ISO containers loaded from the West Coast. CERCG hopes to truck ISO containers with LNG from gas liquefaction plants to a US port on the West Coast and ship those containers via conventional container vessel to Chinese ports. CERCG plans to import 100,000 tons of LNG per month in the first phase.

CERCG is looking for either LNG plants or gas fields near the West Coast and is willing to consider investing in production of LNG in gas fields.

In November 2018, a feeder container ship loaded with 130 LNG ISO tank containers sailed northward from the Port of Yangpu of Hainan Province to the Port of Jinzhou. The transportation of LNG, a trial project jointly approved by China's National Development and Reform Commission, National Energy Administration, and Ministry of Transport, was the country's first-ever attempt to transport the surplus capacity of Hainan terminal to its northern part via LNG tank containers.

Yongsheng Xu, general manager of Nantong CIMC Energy Equipment Co., the manufacturer of the ISO containers, said, "Previously, LNG was merely used for the purpose of peak load adjustment in China; today, it is considered as one of major gas sources due to the tighter natural gas supply ... However, most of the LNG infrastructure with terminal stations as the core is distributed in the southern part of China, such as Hainan Province, Shenzhen Municipality, and Guangxi Zhuang Autonomous Region. This can only help a little in alleviating natural gas shortages in the heating season in the country's northern part."