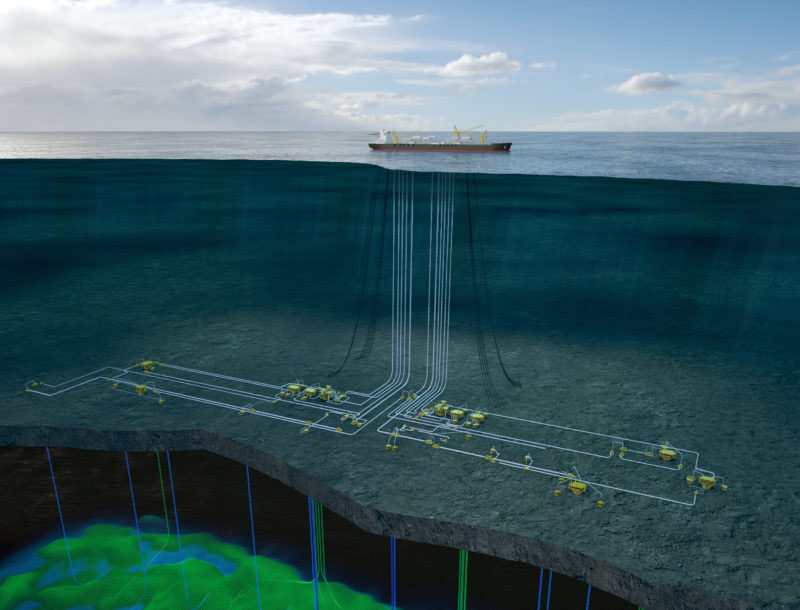 Aker Energy
Aker Energy will use an FPSO and a subsea production system to develop the resources in the deepwater Pecan field offshore Ghana.

The plan calls for phased development and production of the resources in the DWT/CTP contract area. It will start with the development of the Pecan field, one of the largest discoveries in the area, as a firm Phase One. Pecan is located in ultradeep waters ranging from 7,874 ft to 8,858 ft approximately 7 1 miles offshore Ghana. It will be developed with a floating production, storage, and offloading (FPSO) vessel and a subsea production system, and will comprise up to 26 subsea wells.

“The plan will, once approved, ensure an efficient development and production of the Pecan field and further optimization of the DWT/CTP petroleum resources in a way that will deliver value to the people of Ghana, to us, and to our partners,” Aker Energy CEO Jan Arve Haugan said in a statement.

An Integrated Plan of Development and Operations (PDO) was submitted on 28 March to John Peter Amewu, Ghana’s Minister of Energy. Amewu said in a statement that the project will be Ghana’s fourth producing offshore oil field.

Aker said total reserves from Pecan are approximately 334 million bbl of oil, and the field will reach an estimated plateau production of around 110,000 BOPD. In addition to these reserves, the area holds discovered contingent resources (2C) of 110–120 million BOE, resulting in a combined estimated volume base of 450–550 million BOE.

Field production is expected to last for more than 25 years. The Pecan field center will have the flexibility to tie in subsequent development of resources. Data analysis and appraisal drilling are currently ongoing at Pecan South and Pecan South East.

The plan is subject to approval from Ghanaian authorities. Upon approval, Aker and its partners will initiate a process to make a final investment decision (FID). First oil from the Pecan field is expected 35 months after the FID is made, which could be as early as this year.

Aker also announced an option agreement with Ocean Yield for a second FPSO, Dhirubhai-1. If the option is exercised, that FPSO could be used either to accelerate production or for other potential developments based on volumes and geographical distribution.