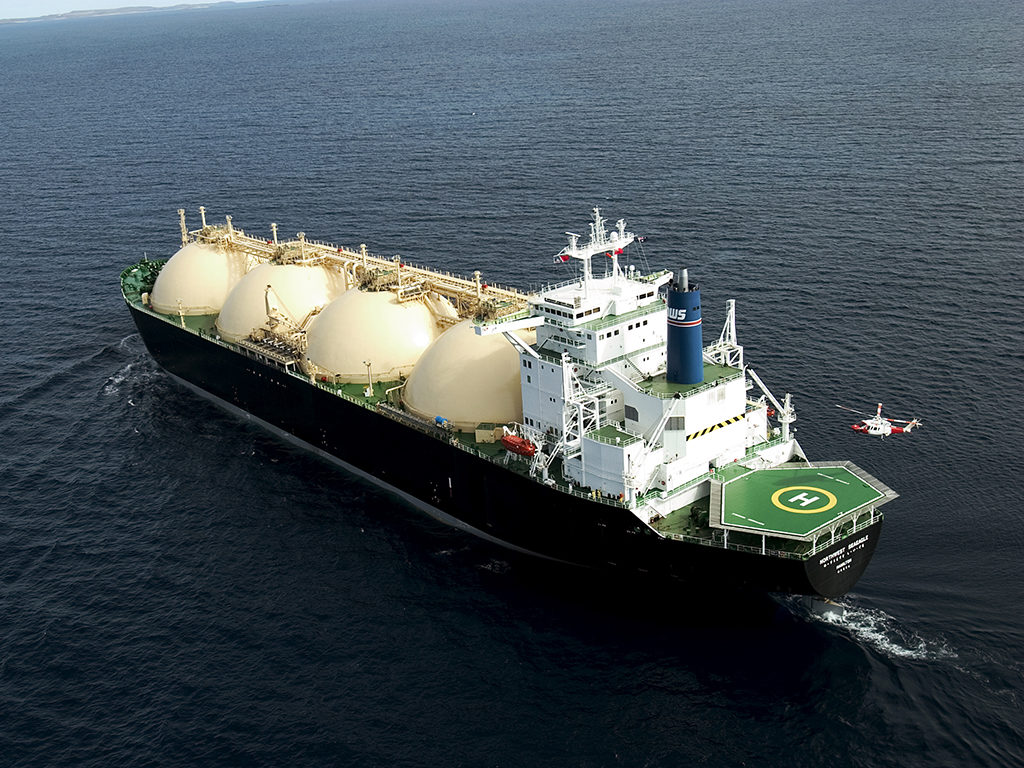 Australasia and North America will be the main center of liquefaction development while Asia will lead in installed capacity of import terminals. North America is projected to become a net exporter, transforming from the second largest import region over the past 5 years, to zero over the forecast period.

Key exporting regions of Africa, Australasia, and the Middle East will account for 60% of the total forecast liquefaction capacity. A combined 479.4 MTPA is expected to be introduced globally over the forecast period.

The global LNG sector has been dominated by Australasia and Asia over the past 5 years with Australasia accounting for the largest Capex share of more than 45%. Asia represented approximately 30%.

Australasia’s Capex share is expected to decrease to 19% over the forecast period of which USD 50 billion is attributed to liquefaction facilities. Projects that are planned to come on stream include the Greater Gorgon LNG, Queensland Curtis LNG, Ichthys LNG, Wheatstone LNG, and APLNG Train 2.

With its plans to export LNG, North America is expected to gain significant market share over the forecast period with an expenditure of approximately USD 70 billion, driven by the construction of liquefaction projects.

From 2015 to 2019, Douglas-Westwood expects 178 MTPA of liquefaction capacity to come on stream with 15 expansion projects and 19 new developments. Associated costs for these terminals are expected to total USD 170 billion. Capex for the forecast period represents an increase of more than 90% from the previous 5 years. This is largely driven by a new project in North America and Australasia and totals 71% of liquefaction capacity additions in the forecast period.

Traditionally a net importer of LNG, North America is actively developing its shale gas reserves and is looking to effectively export its production. Its total forecast spend of more than USD 70 billion is attributed to liquefaction/export projects. The region has a huge potential to become an effective LNG exporter and to affect the global gas market. The realization of this potential, however, is dependent on the efficiency and the willingness of the United States Federal Energy Regulatory Commission (FERC) and the US Department of Energy (DOE) to grant approvals for these new facilities.

Australasia has been actively pursuing LNG export projects to exploit its large gas reserves. The region is expected to continue doing so and to spend USD 50 billion on LNG liquefaction/export facilities over the forecast period. However, there have been significant cost escalations that could threaten the viability of some of the projects. The success of the current projects and the development of future ones is dependent on the region’s management of its escalating costs.

Investments on import facilities are expected to total nearly USD 66 billion, or a compound annual growth rate of 7%. The forecast Capex is expected to increase by 112% compared with the past 5 years.

From 2010 to 2014, Asia had the largest import capacity coming on stream at a total of 67 MTPA, and it is expected to continue to be leading the region over the next 5 years. Almost USD 47 billion is expected to be spent in the installation of 163 MTPA in LNG import capacity. Most of these projects will be in China, Japan, and India.

North America was historically the second largest region in terms of import capacity coming on stream with 47 MTPA at a Capex of USD 3.8 billion. However, no additions are expected over the next 5 years.

Western Europe accounted for 22% of global installed import capacity over the past 5 years. From 2015 to 2019, 74 MTPA in import capacity is expected to be installed at a cost of USD 12 billion. The majority of these projects will be in Spain, Italy, France, Finland, and Belgium.

Africa and Australasia are not expected to have any import facilities installed over the forecast period.

Over the past 5 years, 82 LNG carriers were delivered, accounting for USD 17.4 billion in Capex. All LNG shipbuilding activity during this period took place in Asia where the major yards are located. This is in contrast to the previous decade when LNG carriers were constructed in western Europe. The transition is a result of improved know-how, skill sets, processes, and most significantly, the lower costs offered by Asian shipyards.

The LNG carrier market is expected to show heavy spend throughout the forecast period, increasing by almost one-third. General confidence in the LNG market and the growth in the number of LNG terminals point toward a strong LNG shipbuilding market. With the anticipated demand, yard capacity at the major shipbuilders such as Daewoo, Samsung, and Mitsubishi may be constrained. Increasing participation of Chinese shipyards is expected in the LNG shipbuilding sector should the demand for LNG carriers continue to grow.

The LNG sector attracted considerable attention after Japan’s Fukushima disaster in 2011. In the aftermath, the country shut down its nuclear plants. It imports large amounts of LNG from around the world, particularly from Qatar, to make up for the loss in energy supply. LNG is also a key factor in helping some European nations diversify their sources away from Russian gas supply.

A strong growth in global energy demand will be the main driver for the years ahead. Increasingly, LNG has been used as a fuel for power generation and, to a lesser extent, as a substitute for oil as transportation fuel. These trends will drive a growing expenditure in natural gas infrastructure worldwide. In addition, many areas are starting to view LNG as a solution for meeting seasonal energy demand spikes.

A growing awareness of the environment is another important factor. Natural gas emits only half of the greenhouse gases from coal and is thus seen as a key fuel in reducing emissions. The 2015 European Union Emissions Act may also provide incentives to shipowners to use LNG as a fuel. LNG is also increasingly being adopted as fuel for buses and trucks in several countries.

Over the next 5 years, the US has the potential to become a net LNG exporter. The extent to which this will happen, however, has been a long-standing debate. Approvals for liquefaction projects are slow as the DOE insists on withholding final approval until the completion of FERC’s permitting process. In addition, US natural gas prices are expected to eventually increase as the full-cycle costs of shale gas production are at a minimum of
USD 7 to USD 8 per MMBtu. At these elevated prices, importing gas from North America may not be quite as attractive.

Total global Capex over the next 5 years on LNG carriers, onshore liquefaction, and regasification terminals is expected to increase by 88% from the previous 5 years. While it is reflective of a growing industry, the expenditure profile is also the result of rising project costs, with Australia a prime example. If the challenge of rising costs can be managed and the demand for cleaner energy is widely adopted, a booming activity in the LNG industry can be expected.

Note: There will be some differences between operator announcements and the Douglas-Westwood forecast startup years. The company believes that many of the proposed terminals are still in their early stages and have not attained necessary approvals or secured sites. Therefore, where appropriate, on-stream years have been adjusted to incorporate these factors, arguably portraying a more realistic view of likely Capex. It is worth noting that Capex forecast has been phased over the project’s construction periods and, therefore, includes elements of expenditure on terminals which are expected to come on stream from 2020 to 2022.

Amanda Tay is an analyst at Douglas-Westwood’s Singapore office, focusing on the offshore sector, liquefied natural gas (LNG), and floating LNG. Before joining the company, she worked in finance, having spent several years in the investment banking and wealth management divisions at UBS and HSBC in Singapore and Hong Kong. Tay holds a bachelor of business degree in banking and finance from the Nanyang Business School of the Nanyang Technological University in Singapore.