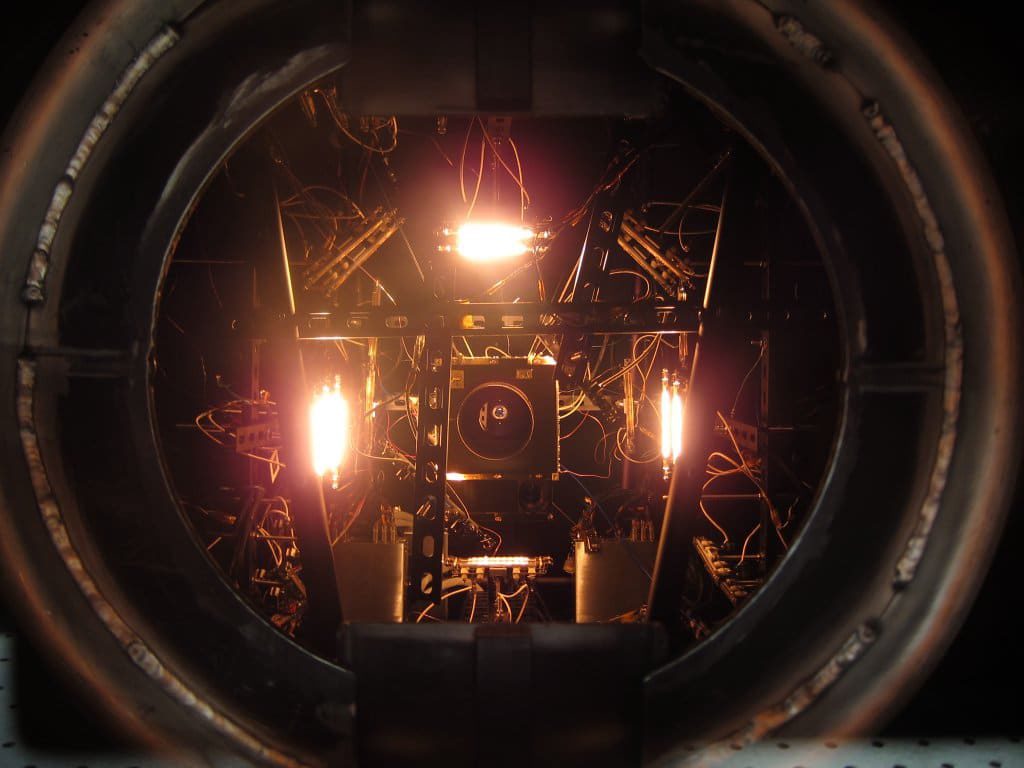 GHGSat
Prior to launch, the satellite Claire was rigorously tested in accordance with industry best practices to maximize chances of mission success. Tests were performed at component, subsystem, and system levels. The image is from Claire's final trip to the thermal vacuum chamber before launch.

GHGSat announced today that its second satellite, Iris, is scheduled to be launched in August and will carry an instrument which incorporates almost 3 years of lessons learned from flying GHGSat’s demonstration satellite Claire (GHGSat-D). As of April 2018, Claire has performed over 2,500 observations of oil and gas facilities (wells, compressor stations, refineries, LNG), power stations, coal mines, landfills, animal feedlots, and natural sources such as mud volcanos and localized seeps. Iris is expected to build on Claire’s success by making it possible to monitor even more sites, more frequently, at a fraction of the cost of other technologies.

The company said it owns and operates the world’s first and only satellite designed specifically to monitor greenhouse gas (GHG) emissions (carbon dioxide and methane) from industrial sources.

“The truly innovative payload technology onboard Iris will grow GHGSat’s multiyear lead ahead of any competition and take GHGSat a large step closer to achieving its goal of being the global standard for emissions monitoring,” said Stéphane Germain, CEO of GHGSat. “The data Iris collects will not only help industrial operators address their emissions more effectively but also improve compliance reporting to regulators and provide unique competitive intelligence. We enable industrial operators to better measure, control and ultimately reduce emissions of GHGs.”

The data generated by Iris as a result of its increased sensitivity will be a cornerstone of the company’s efforts to provide customers with actionable insights and solutions through proprietary analytics and machine-learning algorithms. The resulting value-added products and services go beyond the data, enabling customers to make better decisions and manage their operations more efficiently, the company said in a statement.

Iris is one of two new satellites that the Montreal, Quebec, company plans to bring to market in the next 18 months as it ramps up toward a full constellation. GHGSat’s third satellite, GHGSat-C2, is already in development and scheduled for launch in 2020. The company is also preparing to fly its first aircraft sensor in the summer of 2019 to provide even higher resolution data as a complement to satellite data.

The company describes the process on its website. Each GHGSat satellite orbits the Earth every 90 minutes or so, traveling at over 7 km per second in a polar orbit (north-south) while the Earth turns (east-west) below it, enabling measurement of any source on the surface of the Earth, within days. GHGSat aircraft sensors are dispatched to high-value areas, on demand.

Each gas absorbs light at different wavelengths, creating a spectral fingerprint. The spectroscopy instrument is tuned to measure the amount of light absorbed at specific wavelengths, which in turn enable quantification of concentrations of gases of interest. High-resolution satellite instruments take hundreds of thousands of measurements around a source with a resolution in the tens of meters. Very-high resolution aircraft sensors measure in single meters.

Raw measurements of gas concentrations around a source are delivered as standard products. Value-added analyses of these measurements use proprietary algorithms to estimate emission rates, detect leaks, and monitor patterns of emissions.

GHGSat’s instrument is designed to operate with limited volume, mass, and power budgets typical of nanosatellites and/or unmanned aerial vehicles.

The system does not require any on-site equipment at the source. Any public or private data that can be provided at or near the source (e.g., wind speed and direction) can be used to augment and improve GHGSat analyses of emissions.