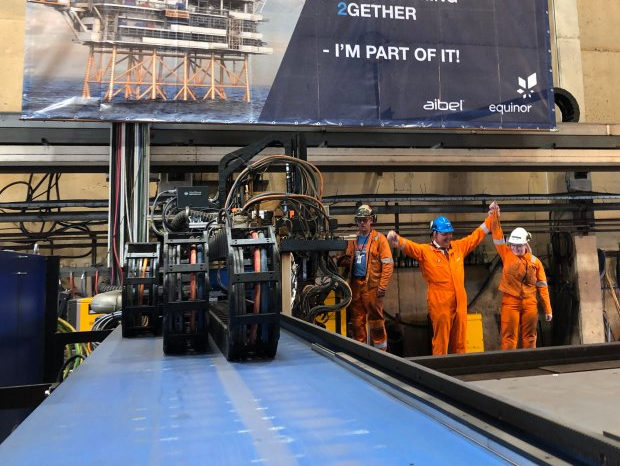 The plan for the development and operation (PDO) of the second phase of the Johan Sverdrup field development was formally approved by Norwegian authorities on the same day that construction began on the field’s second processing platform.

Johan Sverdrup is the biggest field development on the Norwegian continental shelf since the 1980s, co-owned by operator Equinor, Lundin, Petoro, Aker BP, and Total. Phase 2 of the development, with a planned startup in the fourth quarter of 2022, will increase field production from 440,000 to 660,000 BOPD.

Equinor said in a statement that the first phase of the Johan Sverdrup development is approaching 90% completion, with production expected to start this November. The second development phase will cost an estimated $47 billion. In addition to the construction of a new processing platform (P2), the development will also include modifications of the riser platform, five subsea systems, and preparations for power supply from shore to the Utsira High in 2022. Construction of the second topside has already begun at the Aibel yard in Haugesund.

Phase 1 of the development saw more than 70% of the contracts awarded to Norwegian suppliers. Equinor said that share will be even higher in Phase 2.

“Close and good cooperation with our suppliers has been key to the improvements we have seen in the development so far. Bringing considerable experience and expertise into the second construction phase—which we are currently doing on the processing platform—gives us a sound basis for delivering also the next phase safely, with quality, and at cost,” said Trond Bokn, Equinor’s senior vice president for the Johan Sverdrup development.

The processing platform weighs around 25,000 tonnes and consists of three modules. The main support frame will be constructed at Aibel’s yard in Thailand, the converter unit will be built partly in Spain and in Haugesun, and the processing module will be constructed in Haugesund. After module assembly, the platform will be completed at the Haugesund yard before offshore installation in 2022.

In addition to building P2, Aibel will also construct the drilling platform topside delivered in the first development phase, and for construction of the converter substations for the power-from-shore solution for the field in both Phase 1 and Phase 2.