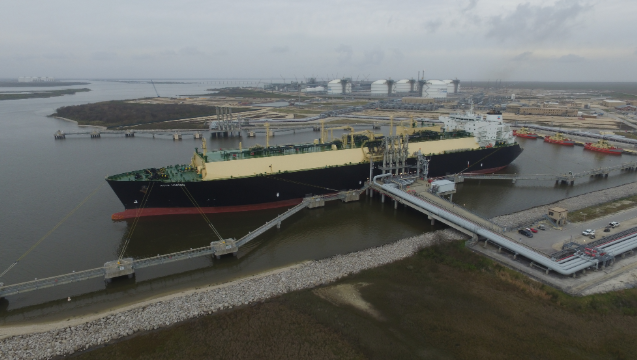 Cheniere Energy
Loading of the first commissioning cargo at the Sabine Pass LNG terminal in February 2016.

Cheniere Energy Partners said today that the board of directors of its general partner has made a positive final investment decision for Train 6 of the Sabine Pass Liquefaction (SPL) Project in Cameron Parish, Louisiana. Cheniere Partners has issued full notice to proceed with construction to Bechtel Oil, Gas, and Chemicals.

To fund a portion of the construction of Train 6 and a third LNG berth and required supporting infrastructure at the SPL Project, the company entered into 5-year, $1.5-billion credit agreement with 29 banks and financial institutions in a transaction that closed on 29 May.

The company said it has signed a natural gas supply deal and marketing contract with Apache Corp. for its Corpus Christi LNG terminal. Apache has agreed to sell 140,000 MMBtu per day of natural gas to Corpus Christi Stage III for a term of approximately 15 years.

The LNG associated with this gas supply, approximately 0.85 mtpa, will be marketed by Cheniere. Apache will receive an LNG price, net of a fixed liquefaction fee and certain costs incurred by Cheniere, for the natural gas delivered to Corpus Christi Stage III under this agreement. The LNG price is based on international LNG indices.

“This first-of-its-kind long-term agreement with Apache represents a commercial evolution in the US LNG industry, as it will ensure the continued reliable delivery of natural gas to Cheniere from one of the premier producers in the Permian Basin, while enabling Apache to access global LNG pricing and receive flow assurance for its gas,” Jack Fusco, Cheniere’s president and CEO, said.

“Apache’s agreement with Cheniere is part of the company’s long-term strategy to leverage the scale of our assets in the Permian Basin and diversify our customer base and cost structure by accessing new markets for natural gas produced at Alpine High. We are pleased to partner with Cheniere in this innovative marketing agreement,” said John J. Christmann IV, Apache’s CEO and president.

The Corpus Christi Stage III project is being developed to include up to seven midscale liquefaction trains with a total expected nominal production capacity of approximately 9.5 mtpa. Corpus Christi Stage III received a positive Environmental Assessment from the Federal Energy Regulatory Commission in March and is expected to receive all remaining necessary regulatory approvals for the project by the end of this year.