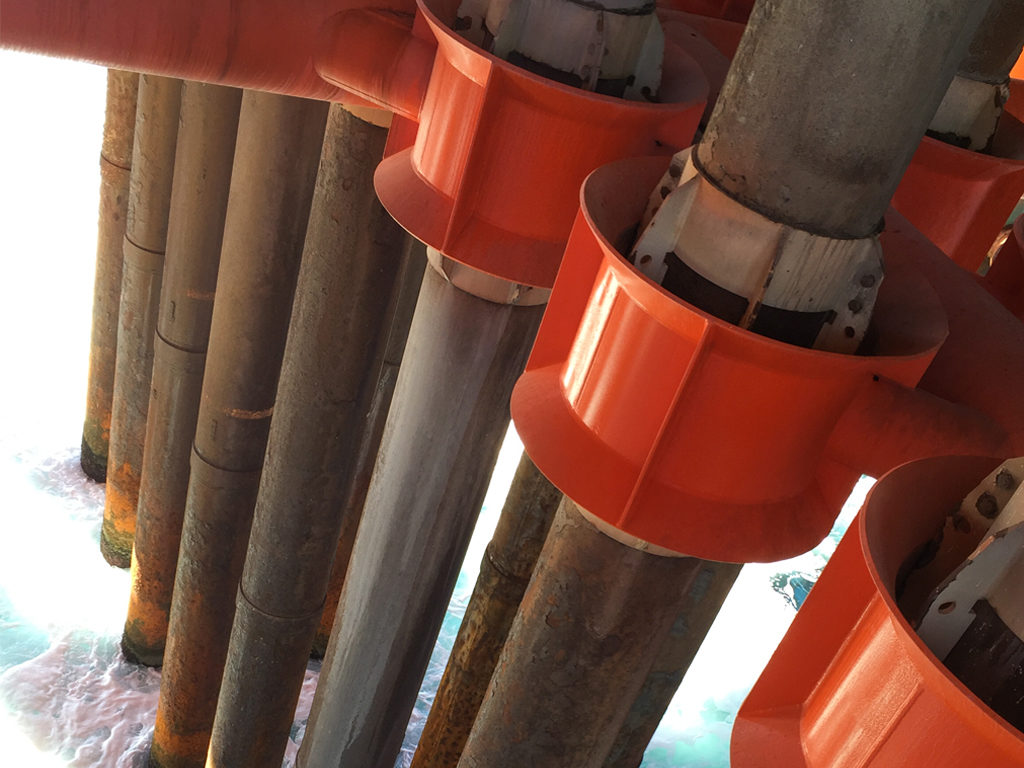 Above-water riser hull piping is a safety-critical component of an offshore platform, but the vulnerable “splash zone”—an area immediately above and below the mean water level—has long been a major concern for design and corrosion engineers. If left unattended, corrosion growth in the area could result in the failure of the hull pipe, which could breed additional safety issues and production loss.

The criticality of riser hull piping requires frequent, rigorous inspections for possible external corrosion. Traditionally, operators use rope access technicians to manually inspect the piping, but this is not an ideal setup. Inspectors must work above water at noticeable height in tough conditions, and operators typically employ rescue personnel (such as fast rescue watercrafts) that add to their costs. These concerns have driven the development of robotic inspection methods that could perform the same tasks as humans, and even do things that humans cannot do.

“Even though we have safety measurements in place, this is a very high-risk job, and the efficiency is not that high. Since we have those challenges, we thought we needed to have something to mitigate them. We want to reduce the safety risk, and we want to improve the efficiency of the inspection,” said Jane Lou, a riser and flowline system engineer at BP.

During a technical session at the 2019 Offshore Technology Conference, Lou looked at the drivers for and challenges in developing a system to replace manual inspection for above-water risers. Her presentation focused on a paper (OTC 29651) co-written with several people from BP about the company’s robotic inspection tools.

Lou said that, on top of safety concerns with personnel, rope access inspections present additional logistical issues. They are normally scheduled for the summer months to take advantage of calmer weather conditions, and the hot summer weather combined with the heavy load of equipment inspectors must carry can easily cause fatigue. Some areas necessary for the assessment of the overall pipe condition may be difficult to access. It is also difficult for inspectors to take continuous pictures, so integrity engineers must rely on their own experience to assemble the pictures and get a full understanding of the pipe’s condition.

Transitioning to robotic inspections helps mitigate the safety risks posed by having inspectors hanging from ropes, as well as the inefficiencies borne out of human error inherent in the manual inspection method. The challenge, however, was creating robotic tools capable of performing the same tasks as humans.

“Can the robotic inspection replicate a manual inspection? That’s our initial idea. But, in the long run, the critical part for the robotics crew is not only in doing what the human inspectors do, but in also doing something beyond that. We have areas that are very difficult and very dangerous for human inspectors. Can we send our robots to do those inspections, rather than use humans to do them?” Lou said.

In 2015 and 2016, BP designed an inspection crawler using a moving platform with magnets embedded in its tracks, allowing it to affix itself to steel surfaces and operate on vertical and horizontal planes. Mounted on top of the platform were two cameras and two scanning profilers that project laser-light patterns onto the pipe wall and analyze the reflections; Lou said that defects in the pipe, such as corrosion pits and deteriorated coatings, reflect light differently than smooth pipe. The reflections are processed and output as a digital heat map model of the surface profile of the riser. After an initial offshore trial, BP developed a robotic inspection fleet combining crawlers and drones, giving it a 360° view of the pipe surface.

BP conducted a proof of concept trial at one of its platforms in the US Gulf of Mexico (GOM) in 2017. The camera took several close snapshots, providing continuous, full coverage of the entire pipe. In addition, the robotic tools could be navigated closer to the riser pipes at different elevations and different angles, allowing for more-detailed images.

In addition to the image quality, robotic inspection tools enable immediate review of the photos, video, and other information collected by integrity engineers at a job site. The tools can also be relaunched easily if more data are needed.

Lou said the next step in development is improving the crawler’s performance, particularly in adding nondestructive examination (NDE) sensors that can allow for the measure of pipe wall thickness. Crawlers with ultrasound testing sensors are commercially available, but they typically need to travel along the pipe itself, instead of the hull, to perform accurate readings. This can be difficult because of the limitations of pipe size and because of the multiple clamps along a pipe that can prevent continuous smooth operation of a crawler.

“In the long run, we really wish the robotic tool can do more things automatically,” Lou said.

The paper indicated that BP is currently investigating other NDE methods and that trials will be performed once the technology matures.