A sizeable number of companies in the shale oil and gas sector are working to find better ways to manage the water they use and produce, but it remains a minority.

In two recent surveys, nearly one third of the operator and service company executives contacted said they have invested in water infrastructure. The surveys were included in quarterly energy activity reports by the federal reserve banks of Dallas and Kansas City.

In both cases, economists from the banks whose regions cover major shale plays in Texas, New Mexico, Oklahoma, and Colorado found the percentages of companies investing in water infrastructure were similar, though they broke it down differently. The Kansas City Fed survey said 30% of the oil industry operators and service companies had made investments. The Dallas Fed survey said 32% of the operators reported investments in water infrastructure, and 15% of the service companies had done so.

As to whether the other companies in the survey have done nothing related to water, the results were conflicting. The Dallas Fed survey said 61% of the companies had no water initiatives, while the Kansas City Fed said 37% had none. 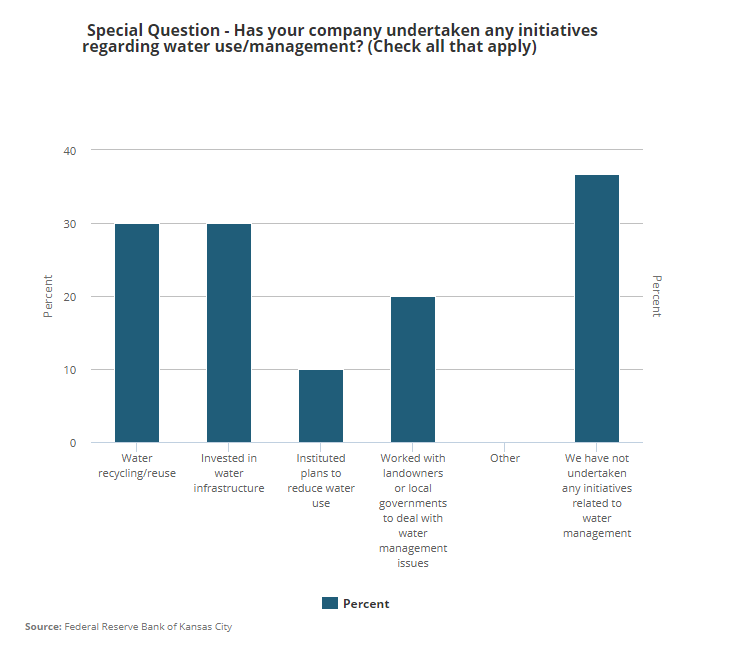 A closer look at the type of companies surveyed, however, adds some perspective. In the Dallas water survey, 54 of the responses were from service companies.

A significant number are engaged in water handling. For example, 13% of the service companies said they were involved in water reuse and recycling. And many of the providers are doing jobs that are unrelated to water, such as managing directional drilling or supplying pumps.

On the operator side, a relatively small percentage of companies represent a large share of the exploration and production activity.

The surveys are not weighted based on the market share of the executives involved. The surveys are seeking a broad cross section of voices to create economic activity reports used by directors of the Federal Reserve Board in Washington to set interest rates and manage the money supply.

Big players like Chevron and Pioneer Natural Resources have all invested in water management, but the many small companies outnumber them in the business. Those operators are focusing their limited funds and staff time on drilling and completing wells that generate enough cash to sustain production, which has been a challenge for many in the business.

That group includes startups funded by private equity firms that concentrate their spending on buying a sizable block of acreage, hiring a sharp development team, and drilling productive wells to attract a buyer willing to pay a high price for the acreage.

Equinor has chosen four suppliers for inspection services on all offshore installations on the Norwegian Continental Shelf and onshore plants in Norway. The frame agreements, estimated at $383 million, are scheduled to be signed soon.

Eni credits an integrated work model for the startup just 3 weeks after completion. Under the model, various disciplines worked in parallel from the exploration phase and synergies with existing production facilities were leveraged.