Is Optical Gas Imaging the New Solution for Methane Detection? 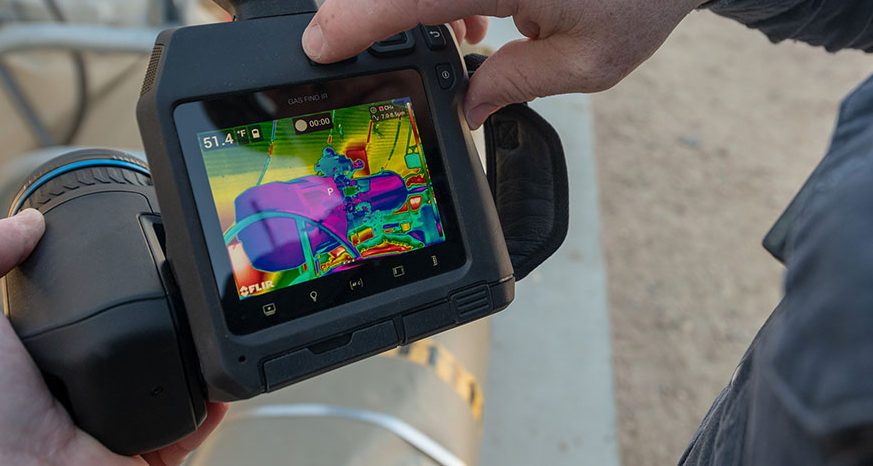 Infrared (IR) thermal imaging cameras are commonplace in the oil and gas industry. For years, companies have used them for a number of tasks such examining pipe integrity within process equipment. Recently, though, a highly specialized version of these cameras has made its way into the marketplace for a new application—the monitoring of volatile organic compounds (VOCs), such as methane, being vented into the atmosphere.

The oil and gas industry emits 13 million tons of methane from its operations each year, according to a study published in Science in July. In addition to the environmental concerns and the regulatory issues emanating from those concerns, these emissions point to operational inefficiencies. The study found that most of the emissions came from leaks, equipment malfunctions, and other “abnormal” operating conditions. The Environmental Defense Fund estimates that the methane lost to leakage is worth an estimated $2 billion.

Speaking at a panel discussion during the recent Energy Drones + Robotics Summit in Houston, Maria Araujo, manager of research development at the Southwest Research Institute (SwRI), said these environmental concerns may shape the market for methane-emissions sensing. She cited recent commitments from major operators to reduce methane emissions as a sign of a shifting attitude. In February, Chevron announced that it would tie executive compensation and rank-and-file bonuses to greenhouse gas emissions targets, with a goal to reduce methane and flaring intensity by 20 to 30% from 2016 levels by 2023. Royal Dutch Shell made a similar announcement in December 2016.

“I think there’s a public perception aspect of it that’s becoming more important,” Araujo said. “It’s a mixture of that and the regulatory environment. This is coming together to make methane a very hot topic. In the last 6 months to a year I’ve seen an increase in appetite for technologies that sense methane emissions.”

Optical gas imaging (OGI) technology has been developed to help companies better view leakage from their equipment, helping them meet regulatory emission-reduction requirements and minimize product loss. An OGI camera takes advantage of the absorbing nature of certain molecules to visualize them in their native environments. The camera focal plane arrays and optical systems are specifically tuned to narrow spectral ranges, and only the gases absorbent in the infrared region, which is delimited by a narrow band pass filter, can be detected. Midwave cameras that detect gases such as methane commonly operate in the 3–5 μm range and use an indium antimonide (InSb) detector.

Anadarko has been at the forefront of using forward-looking infrared (FLIR) cameras on its facilities. The company purchased FLIR cameras in 2007 and implemented a voluntary program to inspect and repair leaks at all production facilities in its Colorado operations. It began conducting weekly audio, visual, and olfactory (AVO) inspections subject to Colorado Regulation No. 7 for VOC tank control requirements. By 2015, all of its Colorado facilities utilized a combination of AVO inspections and FLIR camera surveys to meet and exceed Colorado regulatory requirements. By 2018, it established FLIR camera inspections at all of its onshore facilities in Colorado, Wyoming, Utah, Texas, and New Mexico.

“We’re really primarily upstream with some midstream stuff, but every single facility we have that has any type of methane gas, it can be used there,” said Dustin Waller, senior unmanned aerial system (UAS) analyst at Anadarko. “Everybody should be doing this whether it’s required or not. It’s such a large industry. We’re taking the initiative. This technology is allowing us to simplify the process.”

Brett Kanda, UAS business development manager for FLIR Systems, said during the panel that thermal imaging such as OGI allows users to see in total darkness, so an operator inspecting a leak would not need visible light to notice anything. In addition, he said the technology allows users to compare RGB imagery and infrared imagery side-by-side. While this particular use has been used more for offshore facilities and in the downstream sector vs. linear pipeline inspection, it provides a buffer against false positives, making it easier for operators to verify potential leaks.

“As we learn more about thermography and about how the science works, you realize that oftentimes you can get false positives,” Kanda said. “So, you can see something that looks hotter, but in reality there are a lot of factors that may be causing that that you don’t have to fix. Having the dual sensor and being able to look at RGB allows you to validate that there is an issue with that infrastructure.”

Despite its benefits, OGI presents some challenges for operators, primarily in reviewing the volume of footage the cameras produce and processing the associated data. With that in mind, the focus from developers may shift to making video programs that are more user friendly in terms of turning thermal imagery into actionable data.

In May, SwRI announced it was taking part in a project with the US Department of Energy (DOE) National Energy Technology Laboratory (NETL) to develop automated inspections of oil and gas facilities. As part of the project, SwRI researchers will adapt the Smart Leak Detection System/Methane (SLED/M) technology developed to detect methane leaks in real time from aboard a drone.

The institute has already developed the technology for stationary applications, such as fence line monitoring of midstream facilities, but Araujo said advancing it to perform autonomously from drones may make life easier for operators, potentially reducing the volume of data that needs to be streamed.

“One of the efficacy points of drone inspection is normally just the ability to monitor large areas, but now you have a moving platform that can potentially quantify the methane leak,” Araujo said. “Once you have a moving platform like that, you can potentially get additional information aside from a strict 2D image point that may allow you to quantify the size of that leak with an OGI.”

The regulatory ecosystem around drone use is still in transition, so future government action may help accelerate the adoption of aerial OGI systems. The next frontier is government protocol for the remote identification (ID) of UAS, or the ability of a drone in flight to provide identification information that can be received by other parties. In December, the US Federal Aviation Administration (FAA) issued a request to establish an industry cohort for exploring potential technological solutions in this area.

Once remote ID is established, Kanda said he could see an unlocking of waivers for drones to operate beyond the visual line of sight (BVLOS). BVLOS is often cited as the area that harnesses the greatest potential for drone developers and operators, as they enable a drone to cover greater distances, but FAA waivers are extremely difficult to obtain currently; according to the commercial drone and data company PrecisionHawk, 99% of the BVLOS waiver applications filed to the FAA have not been approved.

“It’s an interesting time in the drone industry with oil and gas and regulations. I think we’re transitioning more into the question of how do we implement this in a large organization? How do we actually scale? Regulations are going to be a big part of that. I think we’re moving in the right direction,” Kanda said.