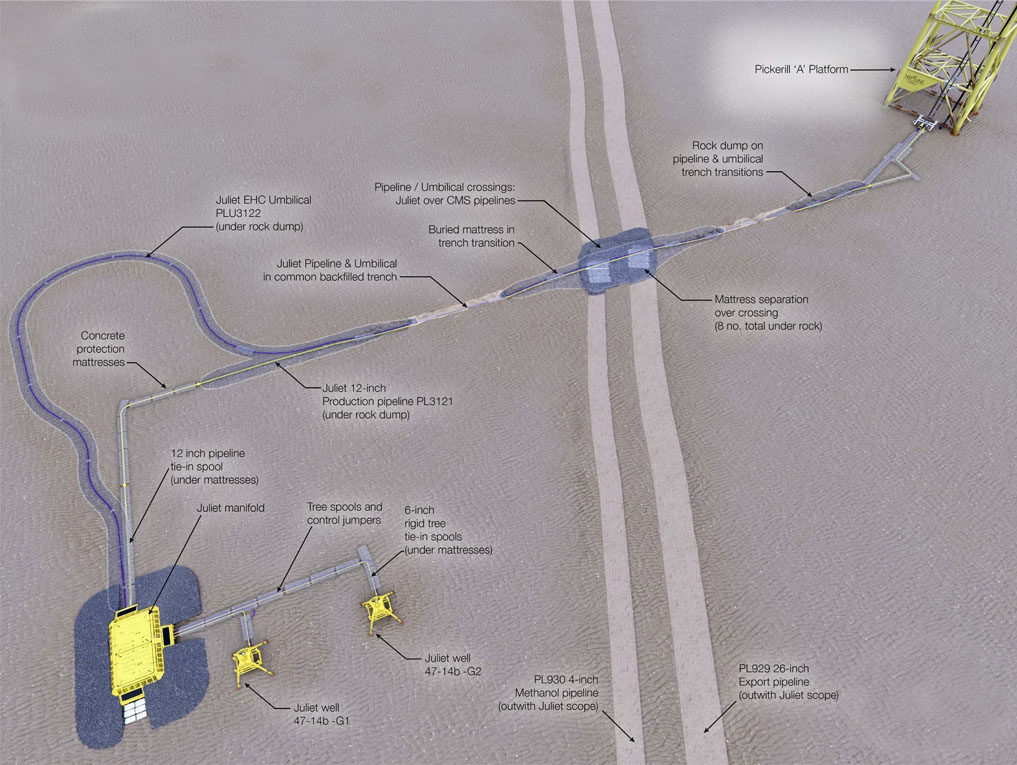 The Juliet decommissioning plan involves the reuse and recycling of the manifold, wellhead protection structure, and various sections of the pipeline and umbilical. Source: Neptune Energy

According to the decommissioning plan, the Juliet manifold and wellhead protection structure will be fully recovered to shore for reuse and recycling. The trenched and buried pipeline and umbilical will be decommissioned in situ. Surface-laid sections of pipeline and umbilical, such as tie-in spools and control jumpers, will also be recovered to shore for reuse and recycling, along with the exposed mattresses and grout bags.

Located approximately 5.6 miles south of the Amethyst gas field, Juliet consists of two subsea wells tied back to the Pickerill A platform. Gas from Juliet’s wells is commingled into a subsea manifold and transported back to Pickerill A via a 13.7-mile, 12-in. pipeline. Control between the Pickerill A and the Juliet wells is through a dedicated subsea electrohydraulic control and chemical injection umbilical. Pickerill A is also set for decommissioning—topside removals for the platform could begin as soon as this year.

Juliet was discovered in 2008 and came into production in 2014. Neptune Energy filed the draft for decommissioning of the field in March, after submitting the Cessation of Production for the field in July 2018.

While the bulk of Neptune’s portfolio is the Norwegian and Dutch sectors of the North Sea, it currently operates the UK’s single largest-producing gas field, Cygnus, in the UK sector. It also has three projects under development: Cygnus Gas Compression, Pegasus, and Seagull. Seagull is set to start up in 2022.

After being acquired in 2019, the Well-Safe Guardian semisubmersible was extensively overhauled and upgraded. Fugro is the second company to be awarded work this year on the asset.