Calgary-based Pembina Pipeline Corp. has entered into agreements to acquire Kinder Morgan Canada Ltd. and the US portion of the Cochin Pipeline system from Kinder Morgan for a total purchase price of approximately $4.35 billion.

Pembina will acquire the Cochin Pipeline System, the Edmonton, Alberta, storage and terminal business, and Vancouver Wharves, a bulk storage and export/import business. 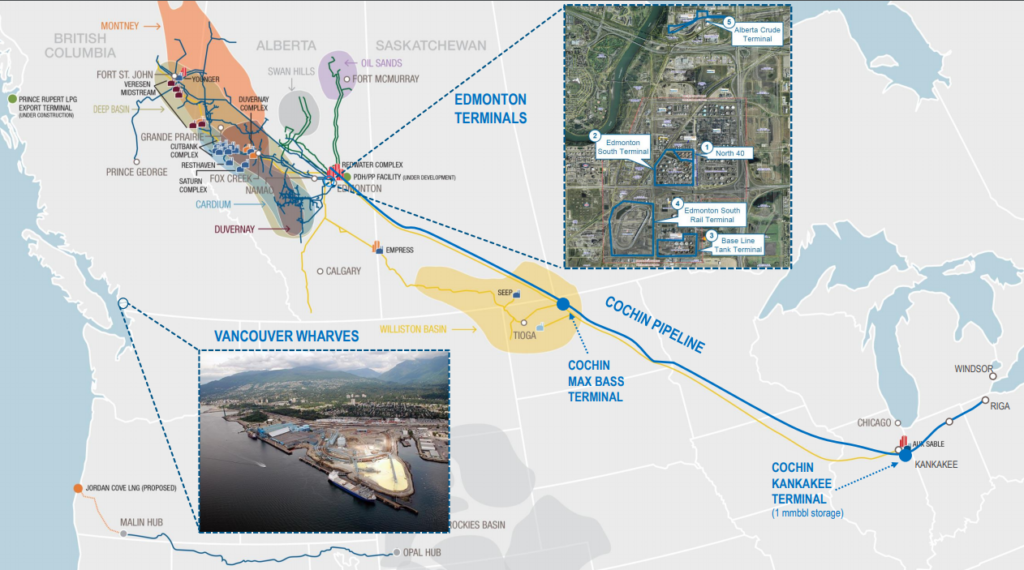 "This acquisition is highly strategic for Pembina, providing enhanced integration with our existing franchise, entrance into exciting new businesses and clear visibility to creating long-term value for our shareholders," said Mick Dilger, Pembina's president and CEO. "It represents an ideal opportunity to continue building on our low-risk, long-term, fee-for-service business model while extending our reach into the US through a highly desirable cross-border pipeline. Further, it will enhance our diversification as well as Pembina's customer service offering as a leading provider of integrated services to hydrocarbon producers in Western Canada," he said.

Pembina will acquire 100% of Cochin, a cross-border condensate import pipeline. Cochin, which spans 2,900 km from Chicago, Illinois, to Fort Saskatchewan, Alberta, has a design capacity of up to 110,000 B/D and is primarily supported by long term, take-or-pay commitments with investment grade counterparties. Cochin complements Pembina's existing condensate infrastructure in western Canada. Cochin has operated both as a condensate import system, and previously, as a propane export system.

Pembina gains enhanced diversification and an entrance into a new franchise opportunity through a crude-oil storage terminal business located in the core of the Edmonton area crude oil complex. With 10 million bbl (net) of storage capacity and inbound and outbound connectivity, Pembina views these assets as highly attractive in the current environment. The storage business also has a strategic alignment with Pembina's existing conventional and oil sands pipelines and marketing businesses. It includes direct connectivity to two rail terminals, ownership of which is included in the transaction, the company said.

Vancouver Wharves is a 125-acre bulk marine terminal facility, which transfers over 4 million tonnes of bulk cargo annually and is supported by fee-based contracts and is positioned as the facility-of-choice for key agricultural, mining, and petroleum product customers.

The transaction has been unanimously approved by the board of directors of the company and is expected to close in the first half of 2020.

Energy research groups Wood Mackenzie and Rystad Energy say improvements in operations costs since the last downturn 5–6 years ago have made it difficult for companies to make further reductions amid the current drop in demand.

The successful string test comes 7 months after the company's FID on the Calcasieu Pass LNG project.