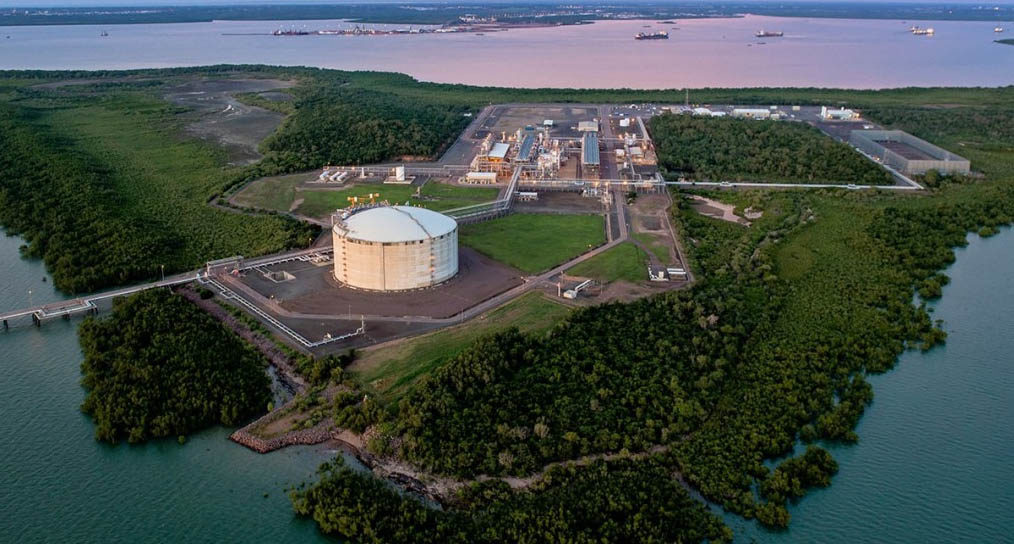 ConocoPhillips
As part of a $1.39-billion sale of its northern Australian portfolio to Santos, ConocoPhillips will give up 56.9% ownership stake in the Darwin LNG facility (pictured).

ConocoPhillips reached an agreement to sell its northern Australian portfolio to Santos for $1.39 billion, a move that signals the US supermajor’s desire to exit the Australian gas market while consolidating equity across a trio of key assets.

As part of the sale, Santos will majority owner and operator of the Darwin LNG facility, located in Darwin Harbor in the Northern Territory, as well as the Bayu-Undan gas field in the Timor Sea, 500 km (310.6 mi) northwest of the Darwin facility, and the subsea Bayu-Darwin pipeline that connects the field to the facility. Darwin, which came on stream in 2006, produces 3.7 mtpa of LNG and is the second-oldest of Australia’s 10 LNG plants. Plans are in place to increase that capacity to 10 mtpa.

In addition, the deal will include ConocoPhillips’ ownership stake in Barossa, a gas and condensate field approximately 300 km (186.4 mi) north of Darwin. Barossa is the primary candidate to backfill the Darwin facility when it is no longer economic to produce gas from Bayu-Undan: reserves from that field are expected to run out by the end of 2022. If Santos sanctions the Barossa project, it will extend Darwin’s life by a further 20 years. Santos said it expects to spend $600 million on life extension projects at Darwin between the end of field life at Bayu-Undan and the Barossa startup.

Santos will make an additional $75 million payment if a final investment decision (FID) is reached on Barossa. Development CAPEX for the project is currently expected to be around $4.7 billion to first gas.

The sale does not come as a surprise. In August, Wood Mackenzie said it expected ConocoPhillips to “rationalize its Australian position.” Low said the company will look to redeploy its capital into increasing output from its North American onshore assets.

“We are extremely proud of our work in Australia-West over the last 20 years,” ConocoPhillips executive vice president and COO Matt Fox said in a statement. “While we believe the Darwin LNG backfill project remains among the lower cost of supply options for new global LNG supply, this transaction allows us to allocate capital to other projects that we believe will generate the highest long-term value.”

Santos already holds ownership stakes in Darwin (11.5%), Bayu-Undan (11.5%), and Barossa (25%). The sale will make the company majority owner for all three assets, boosting its ownership to 68.4% for Darwin and Bayu-Undan and 62.5% for Barossa. Santos said it is in discussions with existing Darwin LNG joint venture partners to sell equity in Barossa and further equity in Darwin, having already reached a preliminary agreement to sell down a 25% stake in Darwin LNG to Barossa partner SK E&S. It is also discussing offtake volumes with LNG buyers. Santos will target a 60%–80% contraction of LNG volumes prior to taking FID on Barossa sometime in early 2020.

“These assets are well known to Santos,” Kevin Gallagher, Santos managing partner and CEO, said in a statement. “It continues to strengthen our offshore operating and development expertise and capabilities to drive growth in offshore northern and Western Australia.”

“This further consolidates Barossa as the leading backfill candidate for Darwin LNG, and puts in place an Australian operator for whom field development will be a portfolio priority,” he said.

ConocoPhillips is the second US major this year attempting to exit the Australian gas market. ExxonMobil announced last month that it was looking to sell its 50% stake in the Gippsland Basin oil and gas development in the Bass Strait offshore the state of Victoria on the country’s east coast. ExxonMobil could receive up to $3 billion from a sale, but decommissioning costs for the aging fields could reduce the price tag.

“This will not be the last big deal in the Australian M&A scene, and we are confident there are more major transactions coming down the pipe. Watch this space,” Low said.