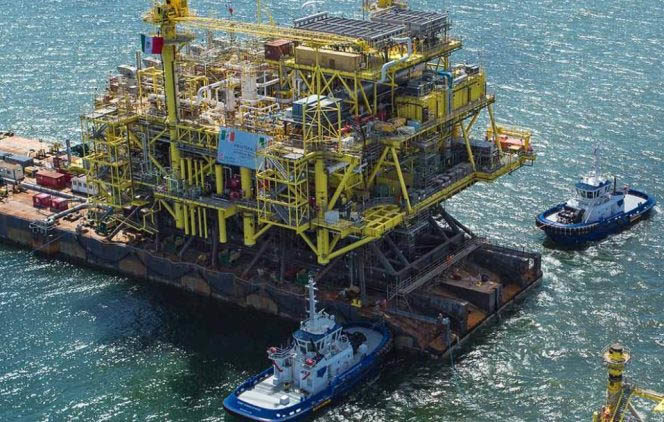 McDermott International reported “substantial completion” of Abkatun-A2, paving the way for operator Pemex to begin commercial operations on the production platform in the Gulf of Mexico.

Located in 124-ft water depth in the Bay of Campeche, the platform will handle up to 220,000 BOPD and 150 MMcf/D of natural gas from Pemex’s shallow-water oil fields. McDermott said it will provide replacement and expansion capabilities to the existing Ku-Maloob-Zaap, Cantarell, and Ayatsil facilities.

McDermott performed fabrication work on the platform at its facility in Altamira, Mexico, and used its Derrick Barge 50 and Intermac 650 vessels to transport and install the platform. The company said the platform is its largest project in size and total value to date for Pemex.

Pemex awarded McDermott a $454-million engineering, procurement, construction, installation, and commissioning (EPCIC) project in June 2016, and first steel was cut in September of that year. The contract called for the basic engineering design to tie-in and commission the jacket, deck, four tripod jackets, and four bridges. The company designed two tripods for use as part of the flare system and two more to support the two bridges connecting Abkatun-A2 with the existing Pemex production complex.

The LNG project includes development of offshore gas fields in Mozambique’s Area 1 and a liquefaction plant with a capacity in excess of 12 mtpa. The gas turbines are slated for delivery in the 2H 2021 and 1H 2022, and the compressors are expected in 2021.