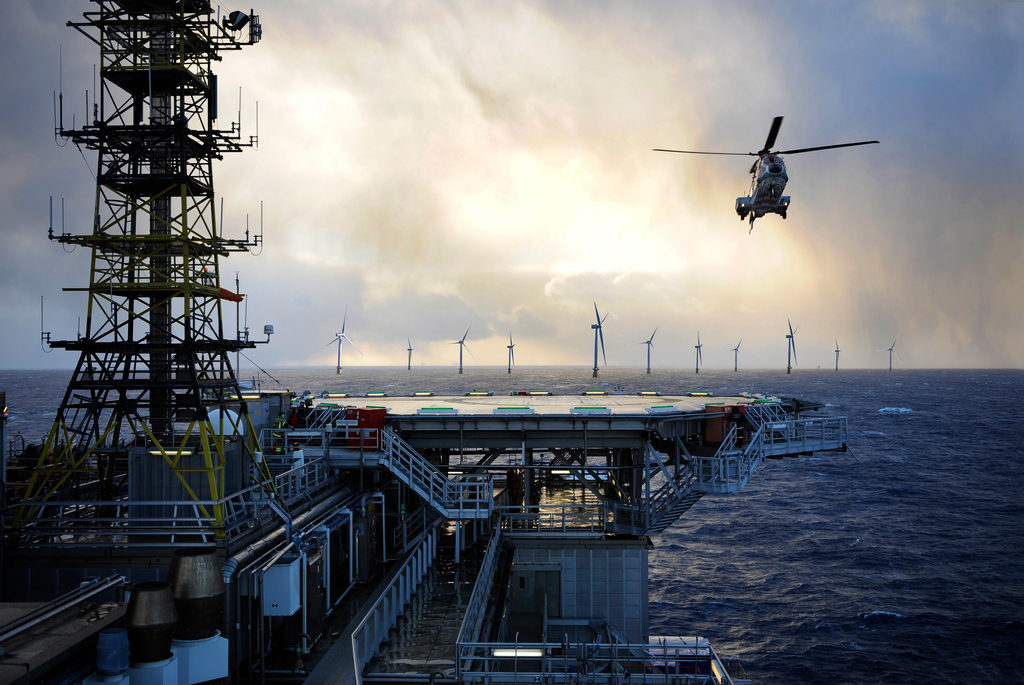 Equinor
Illustration of the Hywind Tampen project. Dimensions and distances are not realistic.

Equinor and the Snorre and Gullfaks partners have made a final investment decision for the Hywind Tampen offshore wind farm development. By reducing the use of gas turbines on the fields, the project helps cut CO2 emissions by more than 200,000 tonnes per year, equivalent to the annual emissions from 100,000 passenger cars. Plans for development and operation have been submitted to Norwegian authorities.

The oil and gas platforms will be the first ever powered by a floating offshore wind farm. The wind farm will be located some 140 km from shore in 260–300 m of water between the Snorre and Gullfaks platforms.

“We have been systematically maturing technologies for floating offshore wind for almost 20 years. The decision by the Snorre and Gullfaks partners helps bring this technology an important step forward. About 80 % of the global resource potential for offshore wind is in deep waters, and floating offshore wind may play an important part in the energy transition toward more sustainable global energy supply. This brings substantial opportunities for Norwegian industry,” said Eldar Sætre, CEO of Equinor.

The Hywind Tampen investments will total almost NOK 5 billion. Norwegian authorities through Enova have made a funding commitment of up to NOK 2.3 billion for the Hywind Tampen project. In addition, the Business Sector’s NOx Fund has decided to support the project by up to NOK 566 million.

The wind farm will consist of 11 wind turbines based on the Hywind technology developed by Equinor. Hywind is a floating wind turbine design based on a single floating cylindrical spar buoy moored by cables or chains to the seabed. Its substructure is ballasted so that the entire construction floats upright.

The 8-MW turbines will have a total capacity of 88 MW, capable of meeting about 35% of the annual power demand of the five Snorre A and B, Gullfaks A, B, and C platforms.

“The pioneering Hywind Tampen project will help cut emissions from Gullfaks and Snorre. We are driving a transition aimed to sustain and add value on the Norwegian continental shelf, while reducing the carbon footprint from our operations,” said Arne Sigve Nylund, Equinor’s executive vice president for Development & Production Norway.

“The authorities’ consent to extending the productive life of the Gullfaks field to 2036 and the Snorre field to 2040, up to 20 years longer than when the fields were initially planned, has been essential to realizing the Hywind Tampen project,” said Nylund.

According to a study performed by Multiconsult, the Hywind Tampen project will generate from 1,550 to 3,000 man-years through the field’s productive life in spinoffs for Norwegian industry, most of which will be generated in the project’s development phase.

Scheduled to come on stream in late 2022, Hywind Tampen will be operated from Equinor’s Bergen office. Gulen Industrihamn in western Norway has been chosen for the assembly of the floating wind turbines for Hywind Tampen before being transported to the field in the North Sea.

The floating design allows Hywind wind turbines to be placed in waters too deep for conventional bottom-fixed turbines. Offshore winds are typically more consistent and stronger over the sea, due to the absence of topographic features that disrupt wind flow.

Hywind uses a ballasted catenary layout with three mooring cables with 60-tonne weights hanging from the midpoint of each anchor cable to provide additional tension.

Control software on board constantly monitors the operation of the wind turbine and alters the pitch of the blades to effectively dampen the motion of the tower and maximize production.

After 8 years of testing a full-scale prototype offshore Karmøy in Norway, the Hywind demo has been shown to function well in all wind and wave conditions.

The floating structure consists of a steel cylinder filled with ballast water and rock or iron ore. An updated design has been made based on the experience from the demonstrator prototype. The new design has a design draft of 85–90 m and a displacement of around 12,000 tonnes. The diameter at the water line is about 9–10 m, while the diameter of the submerged section of the buoy is 14–15 m.

Onshore assembly reduces time and risk of offshore operations. The substructures for Hywind Scotland were transported in a horizontal position to the onshore assembly site at Stord on the west coast of Norway. There, the giant spar-structures were filled with close to 8,000 tonnes of seawater to make them stay upright. Finally, they were filled with around 5,500 tonnes of solid ballast while pumping out approximately 5,000 tonnes of seawater to maintain draft.

The structure is moored to the seabed using a conventional 3-line mooring system. In a wind farm layout, common anchor points may be used, reducing the number of anchors per unit. The mooring lines are currently made of steel chains. In the future, anchor types will be determined by seabed conditions, and in the case of Hywind Scotland, suction anchors are used.

In 2009 Statoil (now renamed Equinor) installed the Hywind Demo offshore Karmøy, Norway. The demonstration unit has a 2.3-MW turbine, while the diameter of the blades is 85 m. For 6 years, the demonstration unit performed well, and in 2015 it was decided to proceed to the next phase.

Enova is a Norwegian government (Ministry of Petroleum and Energy) enterprise, dedicated to energy and climate policy. Its activities are financed through resources in a dedicated fund. The Ministry of Petroleum and Energy governs Enova's management of the fund through a 4-year agreement between the Ministry and Enova which sets goals and reporting criteria.