Following its creation of two pure-play companies in August, TechnipFMC yesterday revealed the name of its engineering and construction (E&C) company. Originally referred to as SpinCo, it will be named Technip Energies, targeting global energy transition.

In its 23 October third-quarter earnings call, the company said Technip Energies will be working on SpinCo’s backlog, with LNG comprising more than 50% of the business. RemainCo will retain the TechnipFMC name and will be a fully integrated technology and services provider.

Doug Pferdehirt, chairman and CEO of TechnipFMC said, “When thinking about the two companies, it's helpful to understand where the operational leverage resides. For RemainCo, 89% of the trailing 12-month revenue mix has been driven by subsea projects and service technologies outside North America. We believe these international markets provide the best opportunities for growth.” Almost 90% of RemainCo revenue will be generated outside the US and Canada.

He said the Middle East is expected to continue to lead international growth in surface technologies, and future subsea activity will be driven in part by emerging markets such as Mozambique and Guyana, We also expect activity to strengthen in Brazil as a result of the development of presold assets.

SpinCo’s backlog “equates to nearly 3 times the revenue projected for 2019. Looking at the backlog in greater detail, approximately 56% of the $18 billion of total backlog is related to future work on LNG projects including Yamal LNG, Prelude FLNG, Coral FLNG, and Arctic LNG 2,” Pferdehirt said. 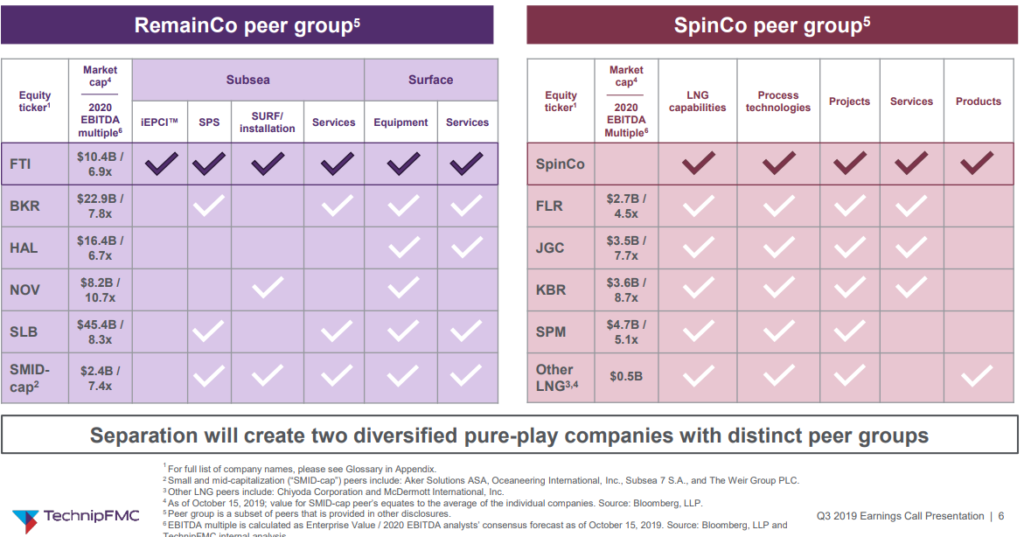