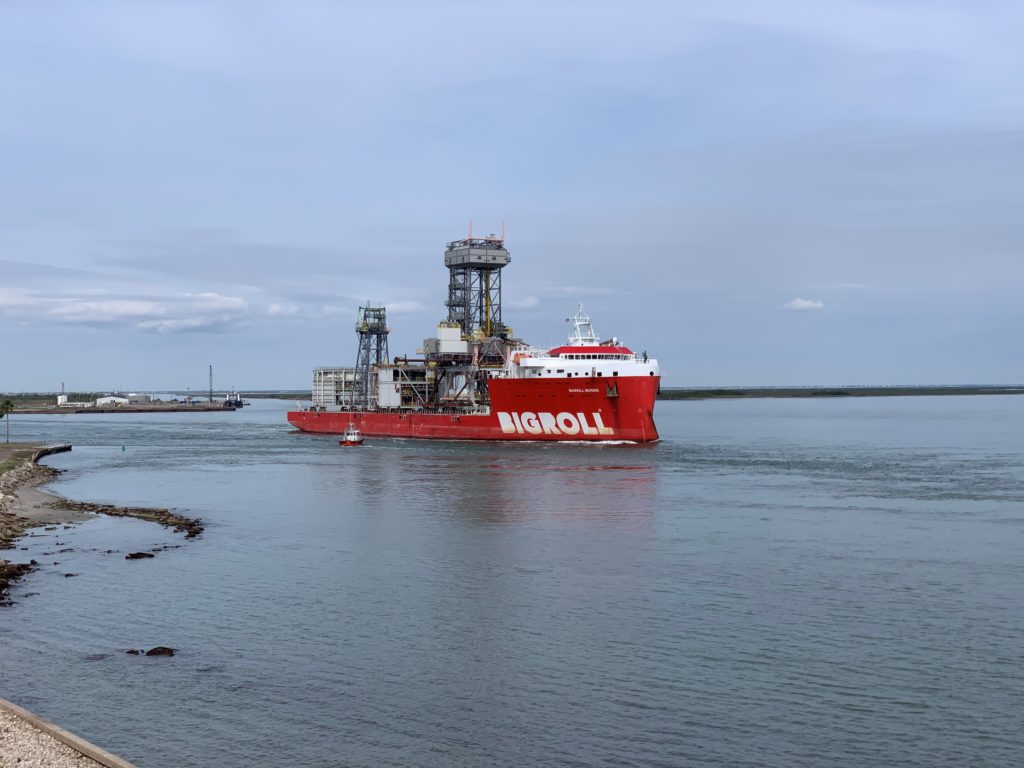 Courtesy of Bill Furlow, International Society of Automation
The BigRoll Bering was spotted leaving Corpus Christi, Texas, on 17 November, headed for the Peregrino heavy-oil field offshore Brazil. Drilling modules and a flare boom are being transported for the field’s Phase 2 development.

Sister vessel BigRoll Beaufort departed Stord, Norway, with the living quarters for the Peregrino C platform. It is expected to arrive in Rio de Janeiro on 6 December.

The new Peregrino C platform will be installed at the field by Heerema’s heavy-lift vessel Sleipnir. The jacket left the Netherlands in October, now followed by the topside from Texas and the living quarters from Stord, Norway. Heerema will install the entire platform in December.

At the same time, Equinor is installing subsea equipment and pipelines on the seabed at the field.

The Peregrino field is Equinor’s largest international operation outside Norway, and Phase 2 involves the addition of a third fixed wellhead platform to the field, extending its main productive life and adding 273 million bbl in recoverable reserves. The field’s production capacity is 100,000 B/D.

The Peregrino field is located in licenses BM-C-7 and BM-C-47, approximately 85 km offshore Brazil, in the Campos basin, in water depths of 100 m. The second phase is expected to be developed at a cost of $3.5 billion and will start production by the end of 2020.

Equinor and Sinochem are joint field owners, with Equinor being the operator with a 60% interest in the asset. The concession period of the field extends until 2040.

The second phase involves the Peregrino southwest area, which is not accessible by the existing A and B platforms. Its development plan involves increasing the number of production wells in the new area by drilling 15 oil producers and six water injectors.

A new drilling center, the third platform WHP-C, will be installed in water depths of 120 m for drilling the production and injection wells, with first oil at the end of 2020.

The field will be developed using horizontal production wells with artificial lift that will be provided by subsurface downhole electrical submersible pumps. Multiphase export booster pumps will be installed to pump oil, gas, and water that will be carried by export pipelines to the existing floating production, storage, and offloading unit for processing. Produced water will be returned after the separation process to the WHP-C for reinjection.

Facilities available at the WHP-C will include drilling facilities, utilities, power generation, living quarters, and helideck.