The digital transformation has spawned a rapidly changing business environment, where the lines between different industries are blurrier than they were in the past. It can be a risky business proposition. Last year, McKinsey reported that 70% of complex, large-scale digital change programs do not reach their stated goals. At the time, it said that sustaining a transformation’s impact typically requires a total reset in mindsets and behaviors, and that many companies struggle to implement such a reset.

A former energy industry executive said that oil and gas companies are facing the same struggle, particularly in adjusting out of traditional network infrastructures filled with siloed data gathered from analog processes. As other industries adopt digital mindsets at a faster pace, the oil and gas industry risks being left behind.

“We haven’t really followed other industries, and that is part of the challenge I see us facing today. We need to get out of this, because if we are not able to do this ourselves, the future will have already caught up to us,” said Trond Ellefsen, CEO and founder of Invatare, a startup working in artificial intelligence and autonomous operations.

Speaking at the recent OilComm Conference and Exhibition, Ellefsen, a former executive at Norsk Hydro and Equinor, said that global megatrends such as urbanization, demographic shifts, and the push for low-carbon energy solutions, are affecting the energy industry. By themselves, these trends may follow a linear or an evolutionary path. Combined, these trends, fueled by the increasing velocity of technological innovation, could lead to a profound disruption.

Ellefsen said current investments in digital technologies, artificial intelligence, and machine learning in oil and gas are not delivering as expected. Projects are not gaining traction, generating expected return on investment, nor are they changing behaviors. Many companies are focused on small changes inside existing organizational silos, but they are not considering the value of implementing digital strategies across the supply chain. This kind of incremental approach, he said, is not adequate to maintain a strong presence in the current digital landscape.

“We have to make leaps now,” he said. “We cannot do baby steps. While we are implementing technology along a linear axis, technology has gone exponential. That is why the distance between technology opportunities and technological reality has never been greater. That is the challenge.”

Ellefsen said that most digital strategies in oil and gas fail to reflect how digital technologies affect economic fundamentals and industry dynamics. Because companies do not build architectures to account for this, those architectures have evolved mostly by coincidence.

“You have autonomous demand operations in other businesses, optimization of predictions in other businesses, analytics and visualization, mature cloud offerings, all of this is currently available, but still we are putting in data lakes for drilling, data lakes for operations, data lakes with different languages, different ways of describing the data,” he said. “That’s mind-boggling. It’s like the banks having a different definition of the dollar depending on what country you’re in. The dollar means the same. In oil and gas, it does not, because we haven’t standardized.”

Despite this, Ellefsen said an abundance of opportunity exists for companies to implement new operating models across their value chain. The model he presented highlighted some of the mature impact areas that would not require “long and painful” digital projects. He said that a cross-functional integrated and open platform solution may be the answer to many companies’ digital struggles, but an industrywide cross-collaborative platform is critical for any cross-company digital effort to be successful. 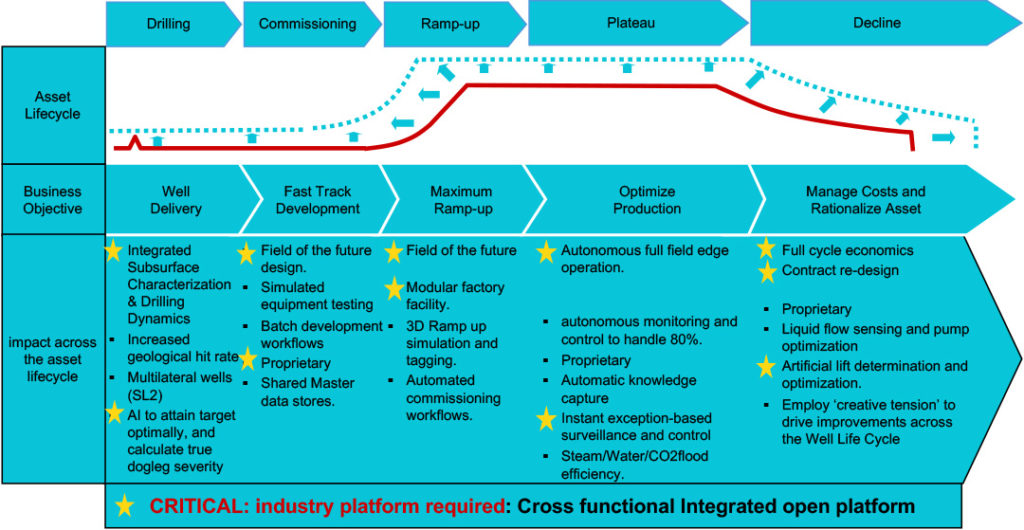 Ellefsen noted that many companies are making advances in their digital transformations, such as Total’s Autonomous Robot for Gas and Oil Sites (ARGOS) Challenge, a project in which the operator simultaneously tested multiple prototypes of surface robots designed to autonomously inspect or manage emergency situations on its facilities. A pilot of the winning design is now being developed at one of its industrial sites. Ellefsen also mentioned the numerous automated drill floor robots that have been developed and reached maturity in the past decade.

These advances, Ellefsen said, are still fairly compartmentalized, and scaling them to fit outside of their original silos is still a challenge.

Ellefsen said compartmentalized initiatives inside a siloed business architecture increase complexity, and companies should resist investing in micro-feature adjustments inside that architecture. Deliberate investments are required to build a future open architecture where data can be analyzed across functions and systems.