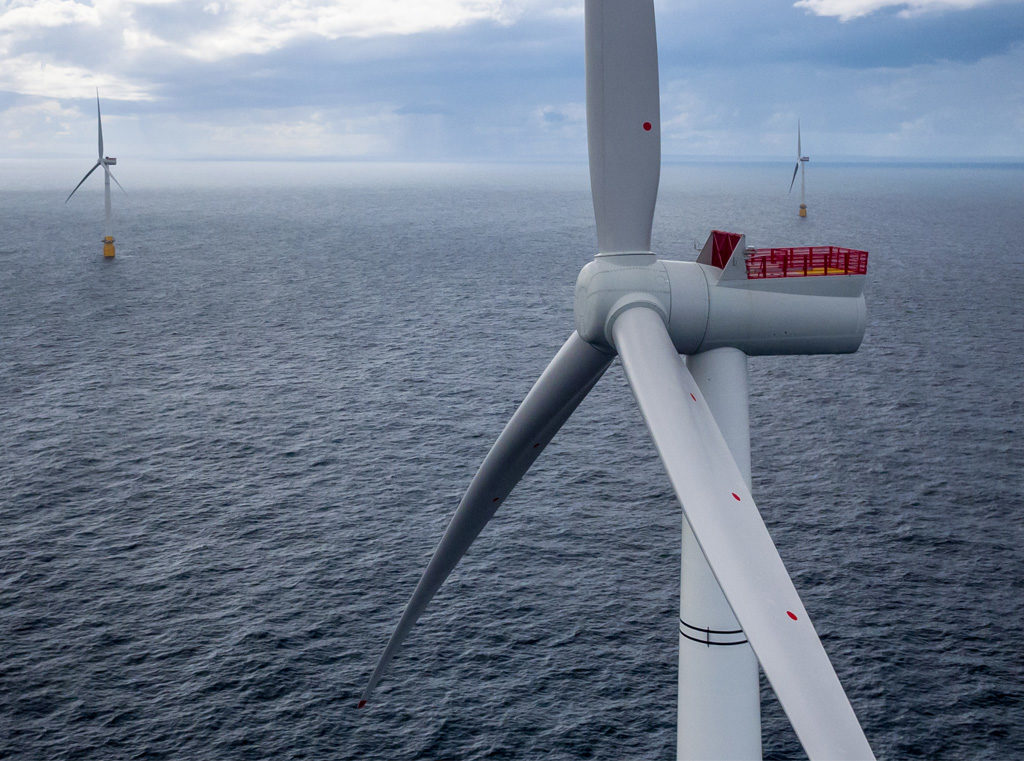 Øyvind_Gravås/Woldcam/Equinor
Equinor launched the Hywind Scotland pilot park to test its wind turbine design technology on a larger scale. Following its successful operation, the company sanctioned Hywind Tampen, a wind farm poised to be the first supplier of electricity generated by floating wind turbines to oil and gas platforms.

The world of energy is changing. With society’s expectations of a strong political and industrial action to the threat of climate change, and renewable technologies becoming more attractive from a financial standpoint, the oil and gas industry finds itself examining where, and how, it will fit into the future mix. That examination, and the discussion around the energy mix, often pits oil and gas as a competitor with renewables, or an outright opponent, but the two sides may have a lot to offer each other.

While it only accounts for 0.3% of global power generation today, a number of analysts have pointed out the potential of offshore wind as a commercially viable renewable energy source. In its 2019 outlook on offshore wind, the International Energy Agency estimated that global capacity will increase 15-fold over the next 2 decades, turning it into a $1.0-trillion business.

Much of the focus for offshore wind is on generating electricity for municipalities, but it could also serve as a compliment to conventional oil and gas projects, primarily through platform electrification.

According to Wood MacKenzie, approximately 5% of offshore wellhead production globally—more than 1.7 million BOE/D—is used as fuel to power platforms, reducing sales volumes and producing emissions of around 200 million tonnes of CO2 each year, the equivalent of the total CO2 emissions of Vietnam. In a world where carbon pricing may become more commonplace, renewables offer potential long-term cost savings.

“It is a different range of opportunities, whether it’s onshore or offshore, and other areas being looked at as well, the concepts being developed. If the industry thinks about all those different options—and there should certainly be many different ways you can make this happen—it’s just a question of what is sensible to your platform,” Linden said.

The Economics of Wind Power

Any push into the renewable space will bring forth some discussion of economic feasibility, and right now the numbers look good for wind power. According to a report from BloombergNEF released in October, global benchmark prices for offshore wind have dropped 32% in the past year and 12% in the past 6 months. Global benchmark prices hit $78/MWh for the second half of 2019, driven primarily by lower equipment costs, but US developers are bidding closer to, or even surpassing, that total.

As subsidies for offshore wind expire in the coming years, platform power generation may be a viable source for long-term supply agreements. Malcolm Forbes-Cable, vice president of upstream consulting and supply chain lead at Wood Mackenzie, said that, depending on the region, it is an economical investment right now. He cited the UK government’s latest Contracts for Difference (CFD) auction round this past September, where offshore wind prices ran as low as $51.29/MWh. That price marked a 30% drop from the lowest strike price seen at the previous CFD auction in 2017.

“In the North Sea, with the latest CFD rounds, the amount of subsidy you get is basically equal to the power price. This suggests that people believe the cost of wind is equal to what you would get in the power price anyway, which then suggests that the market doesn’t need subsidies. There are many other incidences like that around the world. They’re still supported by subsidies in some parts of the world, but that’s shorter term, and certainly if you were to think about how offshore wind’s going more generally, even if it has a 10-year support mechanism, the reason why people are investing in it now is because they believe costs will come down after that period of time,” said Forbes-Cable, author of a paper, “Why Powering Oil and Gas Platforms from Renewables Makes Sense,” published in October that outlined the field-level benefits of offshore electrification.

According to Wood Mackenzie, the levelized cost of energy for diesel fuel generation offshore is between $133 to $166/MWh. If an offshore platform could offer demand north of 5 MW, that might enable an operator to negotiate a 10-year power supply deal as low as $40 to $44/MWh as early as 2025. With market spot prices expected to reach $72 to $77/MWh in that same time frame, an operator could theoretically cut its electricity bill in half by switching to renewable power generation.

The IEA said that the evolution of capital costs for power generation technologies will depend on whether there is a sufficient pipeline of projects to create the momentum needed for technology to develop at an appropriate scale. It estimated that global average upfront capital costs for offshore wind will drop more than 40% by 2030, but this total is based on a 15% drop in capital costs for every doubling of global capacity. Capital costs are likely to be lower in places with enough projects of sufficient size to achieve economies of scale.

“Part of what you’re doing is to try to understand whether something’s going to be economical or not,” Linden said. “In isolation, you’re basically taking a model and asking is there a certain level of production that you need when you take into consideration your wind speed, your costs, and other things? For it to be commercial, you need it to be a certain size. For that thing to make sense, you might not be able to just take it and go, ‘this is all perfect.’ The powering of the platform might not be the only source of demand that you need to make this happen.”

Most of the world’s offshore wind farms have been constructed using a fixed approach, where turbines are installed on platforms secured to the seafloor by concrete or steel pillars. Purpose-built workboats often facilitate the installation of these facilities, and the platforms are usually built to match the specific needs of the location where they are installed. Floating systems involve the installation of a turbine on a steel and concrete floating foundation that is tethered to the ocean floor by a type of anchoring system largely adapted from deepwater drilling platforms.

“When we were thinking about this, the original thought was, well, you could connect a platform to a wind farm from shore. That’s very doable. And then we started thinking about other parts of the North Sea, and if you start looking at them, most of them are much farther from shore. How do you connect over long distances? The economics of that become challenging because your cables are the principal cost there. The farther out you go, the greater the expense that comes,” Forbes-Cable said.

Despite their promise, floating wind technology is still in a fairly nascent stage of development. It has yet to be employed as a commercially viable method of wind power generation, and there are some technical barriers. For instance, the IEA said that operators are looking for ways to use low-cost monopile foundations instead of higher-cost jacket and floating foundation; monopiles have become standard for the majority of projects installed in shallow-water depths

“In terms of floating wind, that technology is not quite ready, or rather it’s not as commercial as just sticking it in shallow waters. I think you’ve got that engineering challenge, but that’s definitely being worked on and I bet we’ll have all sorts of floating wind farms as we push them further and further from the coast,” Forbes-Cable said.

According to the US Department of Energy, the global pipeline for floating offshore wind energy reached 4,888 MW in 2018 over 38 announced projects, but only 46 MW came from projects currently in operation. The department said there are 14 projects with approximately 200 MW of capacity under construction in 9 countries, each of them having achieved either financial close or regulatory approval. However, the industry still faces the challenge of reducing costs in floating wind from expensive demos to viable commercial models. To that degree, economies of scale will need to develop to help drive costs down.

“Where the dollars are going is fixed wind. What you’re starting to see is oil and gas companies putting money into that, not necessarily for platform electrification, but purely from a dollars perspective. Part of that’s to do with the fact that scaling matters, and offshore wind can create scale in that space, while they have very little competitive advantage with onshore wind or solar PV [photovoltaics]. It makes a lot more sense, if companies are to get into renewables, to get into the offshore wind sector. Floating wind is purely a derivative of that,” Linden said.

While few US-based operators have expressed any interest in using wind energy to power their offshore platforms, Equinor has made significant strides in the space. On 11 October, it sanctioned Hywind Tampen, an offshore wind farm that is poised to be the world’s first supplier of electricity generated by floating wind turbines to oil and gas platforms.

Located between the Snorre and Gullfaks platforms in the Norwegian North Sea, approximately 87 miles from shore in water depths of 850 to 980 ft, the wind farm will consist of 11 wind turbines based Equinor’s Hywind technology. Hywind is a floating wind turbine design based on a single floating cylindrical spar buoy moored by cables or chains to the seabed. It uses a ballasted catenary layout with three mooring cables that have 60-tonne weights hanging from the midpoint of each anchor cable to provide additional tension.

Wood Mackenzie said that the wind farm will provide around 35% of the power demand from Snorre and Gullfaks. That number figures to increase during periods of high wind, but power generation from hydrocarbon-fueled turbines will still be required. Regardless, Equinor estimates that Hywind Tampen will help reduce its carbon emissions by more than 200,000 tonnes/year.

Equinor installed a demo of the Hywind technology offshore Karmøy, Norway, in 2009 with a 2.3-MW turbine. In 2017, it launched the 30-MW Hywind Scotland pilot park approximately 15 miles off the coast of Peterhead, near Aberdeen. Hywind Tampen will have a total capacity of 88 MW when it comes on stream in late 2022.

Equinor estimates the total investment in Hywind Tampen as around $540 million. Linden said that the project is something of an outlier in the industry, in that floating wind is a small portion of the overall market. While it has expressed interest in developing floating wind farms off the coast of California, and it owns offshore wind leases on the US East Coast, Hywind Scotland is still the world’s only commercial floating offshore wind farm.

“Having talked to Equinor about this, they’re very clear that they think they have a commercial solution, as in a solution they can build and use effectively,” Linden said. “It’s not necessarily cost-competitive, but it’s there. They’re taking on the risk themselves. They’ve had to find partners to help finance this. They’re taking on the technology risk themselves, and there’s still a bit of distance to go. The engineering challenge is being solved, but there’s still a lot of different questions being asked. Until it becomes commercial, will people take on the risk to try and finance a project like this effectively?”

GHGSat announced a new service for visualizing greenhouse gas emissions. The interactive online resource will be freely available and will be formally launched during COP26 in November.