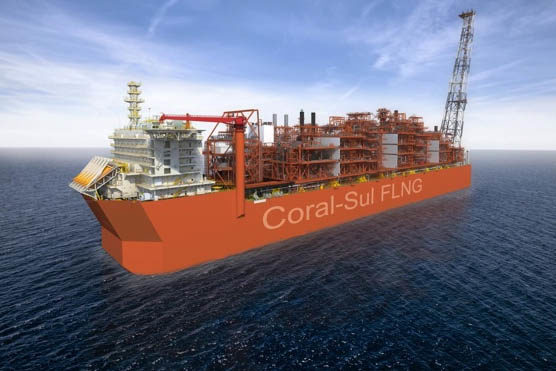 Samsung Heavy Industries has completed the first deck stacking operation for topsides modules of Eni’s Coral South FLNG facility at its shipyard in Geoje, South Korea, a year after first steel was cut for the topsides.

Coral FLNG is being built for Area 4, an Eni-operated project offshore Mozambique that will put in production 450 billion m3 of gas from the giant Coral reservoir. The hull is expected to be launched in 2020, in line with the planned production startup of the Coral South project in 2022. When completed, it will be the first FLNG vessel ever deployed in a deepwater field offshore the African continent.

TechnipFMC won a contract for the engineering, procurement, construction, installation, commissioning, and start-up of Coral South in June 2017, as part of the TJS Consortium with JGC and Samsung Heavy Industries. The contract also covers the facility’s associated risers and subsea flowlines system, as well as the installation of the umbilicals and subsea equipment.

The vessel will be able to house up to 350 people in its 8-story accommodation module. The facility will be anchored at a 2000-m water depth by means of 20 mooring lines weighing a combined 9,000t.

TechnipFMC announced the completion of the first deck stacking operation for the topsides on social media.