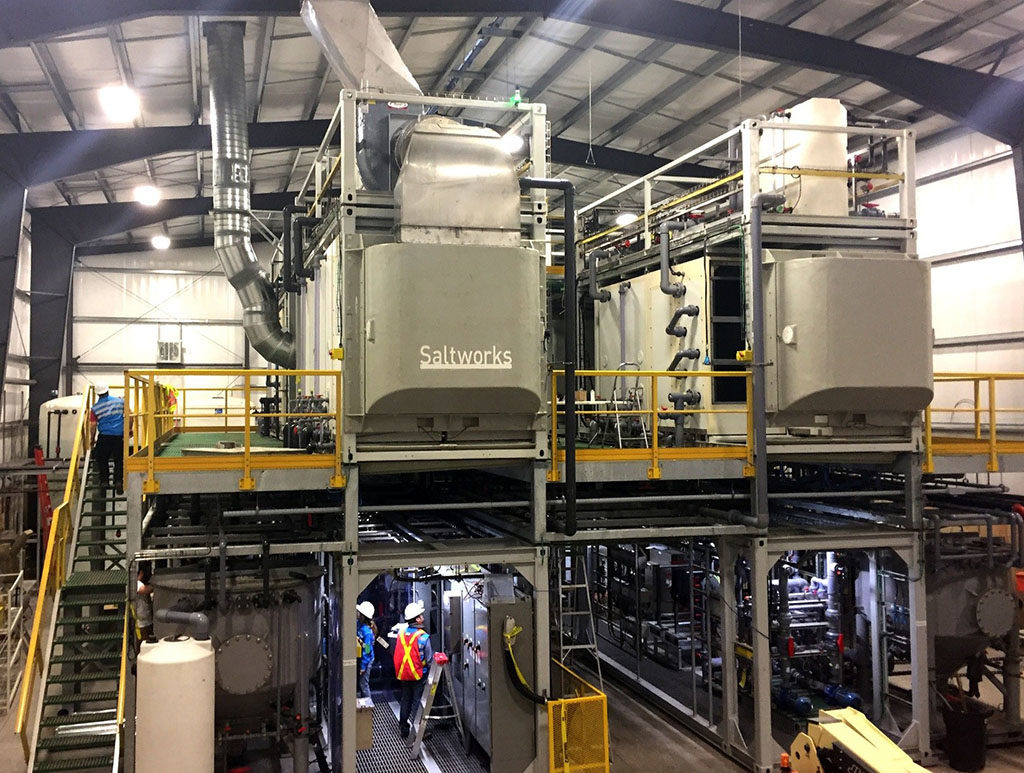 Innovation in oil extraction, particularly around water, has made the concept of “peak oil” a distant memory. New extraction methods propelling the future of oil and gas depend heavily on water as a critical input—shale developments and waterflood enhanced oil recovery (EOR) are two examples. Extraction using water has opened up substantial new hydrocarbon resource plays. However they can produce four times more salty water byproduct than oil. Operators have become experts at reusing this water, in some cases over 95% of it. As a result, water technologies entering the market over the past 10 years have seen little uptake in oil and gas.

Two real opportunities to lower costs and improve production through water technology, specifically desalination, remain. These are important niche markets that benefit from these new techniques:

In 2019, Saltworks Technologies completed two field pilots, in both niches, with two different technologies. The objective to lower operator cost of production was successfully achieved, in rugged and fully automated plants with over 97% uptime, including periods of unattended operation. This article introduces the two opportunity areas, the two technologies, and summarizes the pilot results.

Shale-gas development involves injecting high-pressure water, sand, and chemicals to “frack” the reservoir. After a short flowback period, underground saline water is produced alongside the hydrocarbons. This produced water varies in salinity from 20,000–300,000 mg/L total dissolved solids (TDS), typically in the 150,000–240,000 mg/L range (for reference, seawater is 35,000 mg/L TDS). Operators are well versed at safely storing, transporting, sharing, and reusing produced water in subsequent fracking. However, when fracking in a region slows but production continues, excess produced water must find a home, often disposal in an injection well, sending the water deep underground. Disposal well capacity is becoming increasingly challenged in certain regions, driving up costs as the water must be trucked to more distant disposal wells.

Two examples of disposal-challenged areas are America’s highly productive Marcellus Shale, centered around Pennsylvania, and Canada’s Western Montney Shale near the Rocky Mountains. Disposal challenges may include “tight” geology preventing high-volume injection or resulting in short disposal well life, regulatory curtailment for reasons such as seismicity, and high costs and risks to develop disposal wells since their capacity and permeability may be unknown until tested and all capital sunk.

A solution is needed to economically and safely reduce the volume of produced water in regions where poor disposal capacity and produced-water imbalance overlap. For shale produced waters less than 60,000 mg/L TDS, lower-cost membrane-based volume reduction options now exist such as those presented in the EOR study below. However, most shale produced waters exceed this TDS, meaning that the water must be “boiled” in higher-cost evaporative processes in order to be concentrated.

Until now two types of evaporators have existed:

The authors developed a new third type of evaporator (trade named AirBreather) with no direct contact of produced-water to atmosphere and no freshwater byproduct. This technology was designed for portability with site mobilization and demobilization limited to 4 weeks. The result is a low-cost evaporator suited for shale that ensures no emissions of concern with no freshwater byproduct to manage. Five substantial oil and gas companies, including one supermajor, have either pilot tested or reviewed the technology, and are investing in full-scale plants after two successful field pilots.

This process (Fig. 1) was developed on the shoulders of the Saltworks’ low-temperature evaporator-crystallizer and altered for use in shale while employing the core technology’s parts bin, corrosion-free fiberglass modules, scaling free design, and intelligently automated systems including self-cleaning.

To prove reliable operations and provide emissions data to regulators, a pilot of the novel evaporator technology was deployed to West Virginia and Pennsylvania to treat a variety of ultra-saline shale-gas produced waters (140,000 to 340,000 mg/L TDS). The only outputs were a concentrated brine near saturation (400,000 mg/L TDS) and clean vapor to atmosphere, which if in liquid form would meet both US and Canadian freshwater discharge standards. Following are key pilot results (Fig. 2): 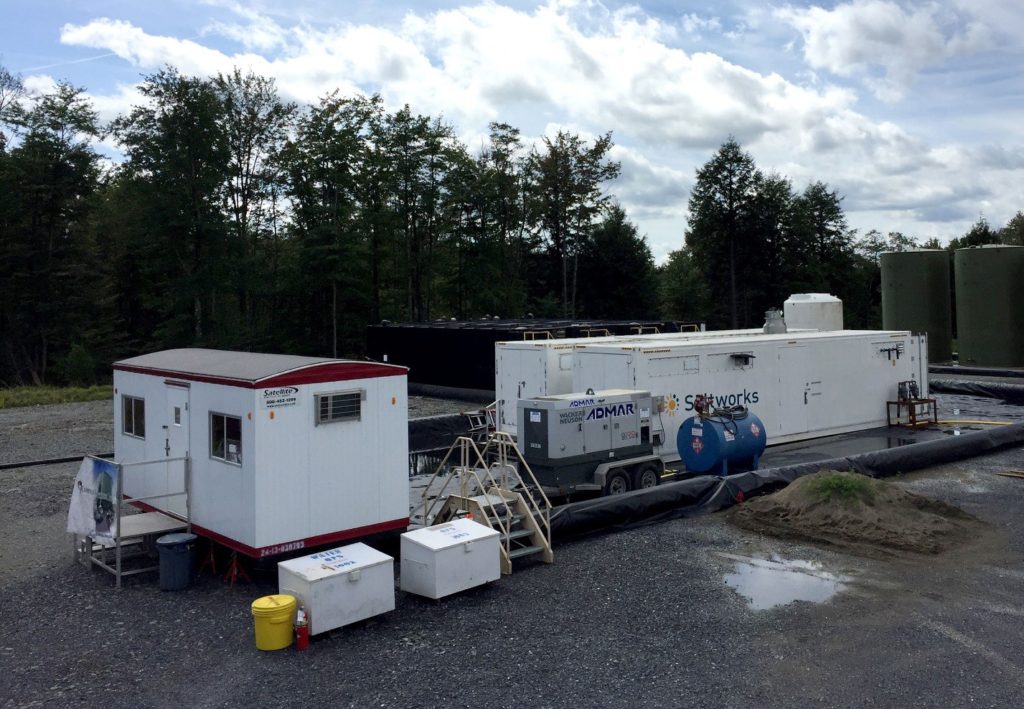 Oil companies are increasingly turning to EOR to boost production from existing fields. EOR involves pumping water underground to push out more oil. This limits environmental surface impacts since well life can be extended, instead of drilling new wells. However, water traveling through the reservoir picks up underground particulate and salts, becoming saline. When produced water is reinjected to recycle it, removing particulate prior to injection can be beneficial to prevent reservoir plugging. In some instances, desalinating and tuning the ionic chemistry of reinjection water can release more oil (for example, to TDS ~2,000 mg/L and with low hardness). In other instances, adding polymer increases water viscosity, preventing it from “fingering” through the reservoir and bypassing the oil it is supposed to push out. Polymer is expensive, however, and its usage increases dramatically with salinity if produced water is recycled.

Images below show the pilot plant, a simplified mass balance, and the reduction in dissolved ions between inlet and outlet. Concentrated brine reject was sent to disposal while the desalinated product water was used for polymer makeup and injected (Figs. 3, 4, and 5). This particular client targeted an injection salinity of 2,000 mg/L TDS. 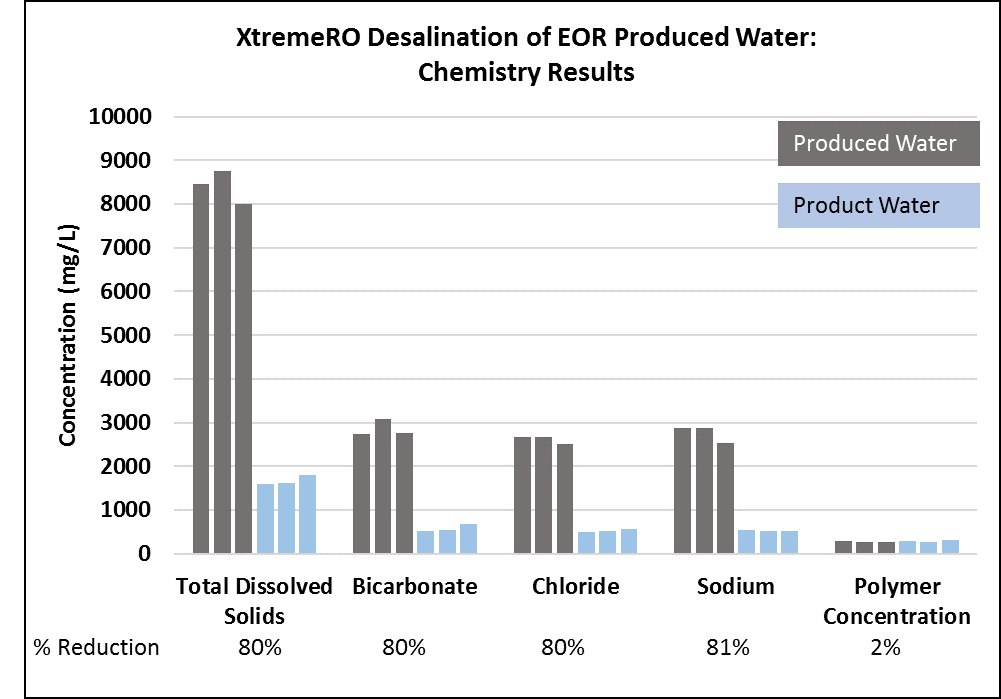 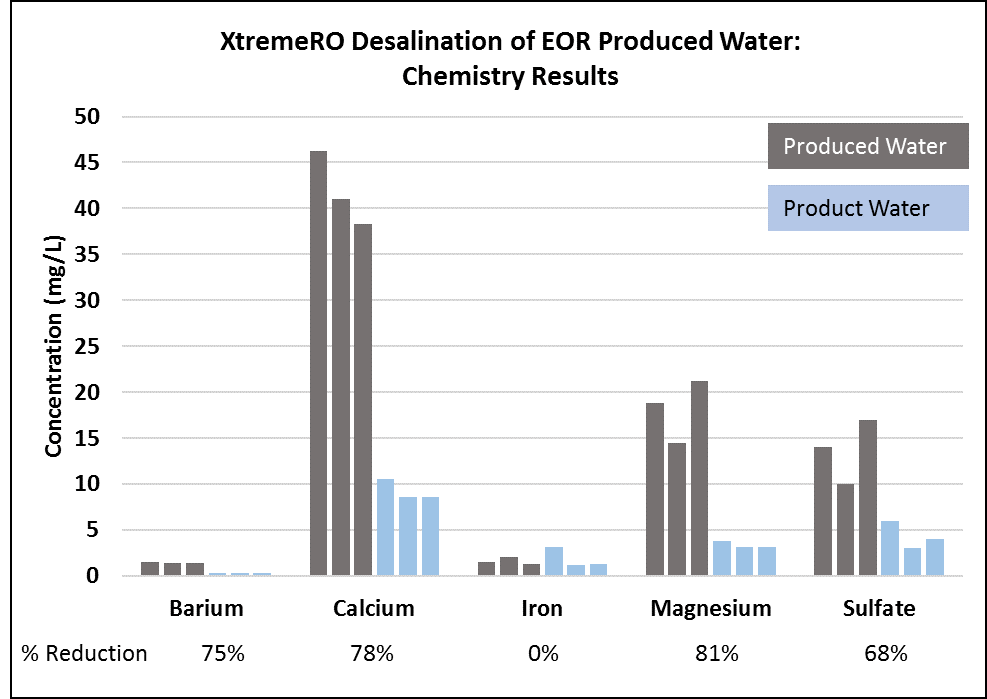 The EOR polymer-flood desalination application best fits where viscosity of injected water must be high, for higher viscosity oils. This results in more substantial polymer savings as polymer consumption increases with both salinity and viscosity target. Polymer costs can exceed $19–$31/bbl ($3–$5/m3) injected water, and results have consistently shown a 50% reduction in polymer usage, which pays for the desalination system.

In addition to cost savings, the following additional benefits can result:

Although the membrane system pilot was focused on EOR, it equally applies to other produced waters (such as shale gas) provided salinity is less than 80,000 mg/L TDS. Brines can be further concentrated to 130,000 mg/L through ultra-high-pressure RO (1,800 psi) technology.

Ben Sparrow is chief engineer and Joshua Zoshi is the COO at Saltworks Technologies. To learn more about these treatment approaches, contact projects@saltworkstech.com.

US Army Corp of Engineers Requests Settlement With North Dakota

The pipeline continues to operate as courts weigh expedited appeals from the Army Corp of Engineers and Energy Transfer.