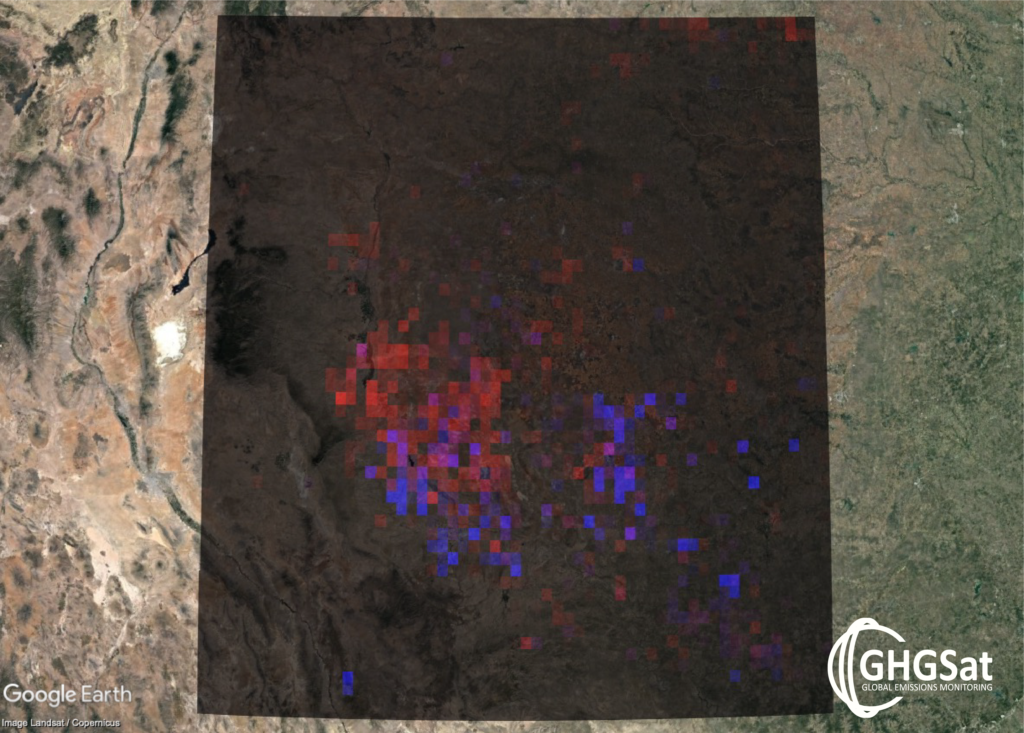 Montreal-based GHGSat today announced a new service for visualizing greenhouse gas emissions. The interactive online resource will be freely available and will be formally launched during COP26 in November.

GHGSat plans to initially provide visualization for methane, on a grid averaging 2×2 km anywhere over land. Users will be able to zoom into the grid to explore geographic patterns and hotspots of methane, a greenhouse gas (GHG). The visualization will be updated on a rolling basis with the latest data. GHGSat will continue to offer higher-resolution methane emission measurements, up to 25×25 m, under a paid subscription service.

The free visualization will integrate data from GHGSat’s own satellites, the European Space Agency's Copernicus Sentinel satellites, as well as other current and future atmospheric monitoring missions. Having 3 years of experience in integrating rich data sources in GHGSat’s commercial services, company President and CEO, Stephane Germain said, “We decided to make this core capability openly available to accelerate the impact of our measurements.We plan to launch during COP26 to highlight the importance of combining the best of all satellite capabilities to help solve the real-world challenges of this decade.”

In 2016, GHGSat launched the world’s first satellite (“Claire”) designed to measure greenhouse gas emissions from industrial facilities. Claire has since taken thousands of measurements, covering over a million square kilometers of the Earth’s surface, identifying previously undetected methane leaks which operators were then able to address.

Public samples of these measurements are available on GHGSat’s website. The company will be launching two more high-resolution emissions monitoring satellites in 2020 that will have an order of magnitude improvement in performance and detection thresholds.

Additionally, it recently announced a $9.8-million project to study emissions from oil and gas operations in the Montney region of British Columbia and last September, GHGSat and Shell announced a framework agreement for monitoring services.

GHGSat uses its satellites and aircraft sensors to offer monitoring services for industrial facilities in sectors such as oil and gas, power generation, mining, waste management, and agriculture to measure, control, and ultimately reduce emissions of GHGs.

Two technical papers authored by GHGSat are available on OnePetro. Monitoring of Greenhouse Gas Emissions From Space in the Middle East and “From Data to Actionable Insight: Monitoring Fugitive Methane Emissions at Oil and Gas Facilities Using Satellites.”