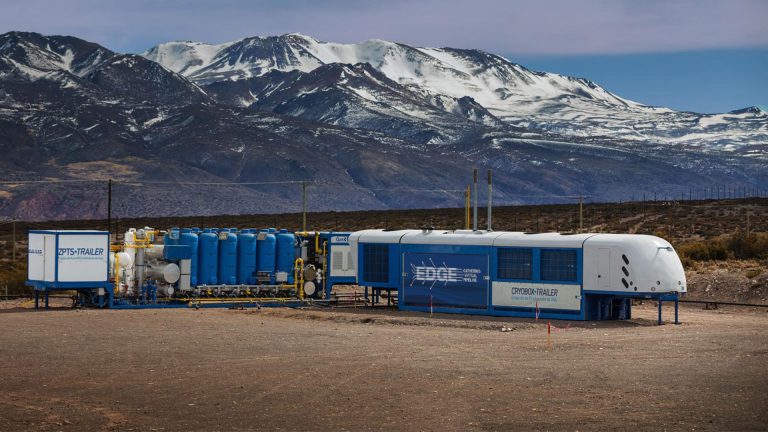 A producer in the Marcellus Basin selected Edge Gathering Virtual Pipelines 2 LLC to capture and liquefy gas from its stranded wells in Tioga County. The producer can now gain economic benefits on assets unreachable by pipeline. Initial operation is underway and is set to be ongoing until at least 2022.

Edge LNG deployed its mobile, truck-delivered LNG equipment clusters to the Marcellus site and each cluster includes two Cryobox liquefaction units. Created by Galileo Global Technologies and deployed exclusively by Edge LNG in North America, this process can be delivered to any site accessible by road. After set-up and safety checks, production can begin within hours without the need of pipeline infrastructure.

Each Cryobox, a mobile liquefaction unit delivered by trailer, can begin production with hours and can convert 1 million BTU/D of gas resulting in up to approximately 10,000 gallons of LNG per day, which is then distributed anywhere it is needed via the virtual pipeline.

Edge will purchase the LNG it extracts from the producer to deliver via its truck-based virtual pipeline to existing customers in the region. The company has also signed a deal to supply LNG to the City of Norwich, Connecticut, which will be used to provide natural gas to homes and businesses.

Mark Casaday, CEO at Edge LNG, said, “The Marcellus is an important region for us, there is lots of potential here with a large number of stranded wells. So much gas goes unharnessed, purely because lack of access to a pipeline has meant there is no economic way to take it to market. We provide operators with an opportunity to profit from wells that would otherwise not be used and we make it into valuable fuel. It’s a win-win solution.”

“It is estimated that stranded wells account for up to 60% of global reserves, and up to 20% of those drilled in Marcellus, showing the scale of this untapped resource,” said Casaday.

The company began on-wellsite LNG production in the US on 7 May 2019, accessing Marcellus gas in Pennsylvania, and making truck-delivered LNG sales to its first customers, which included Emera Energy Services Inc., a New England utility