With Europe on lockdown due to the COVID-19 coronavirus, energy research group Rystad Energy revised its 2020 European gas and power demand forecast, coming a day after the company said the region’s small to mid-sized oilfield service companies are in danger of becoming bankrupt following $5-billion year-on-year cuts in the market.

The revised gas demand forecast was down by 4 Bcm or 0.7%, which is still slightly up from its 2019 calculations. Growth will be limited to just about 2 Bcm year-on-year, short of previous expectations for a 6-Bcm increase.

The revision puts Europe’s 2020 gas demand forecast at 556 Bcm, compared with 2019’s calculated demand of 554 bcm. The research group said its most likely scenario assumes most of Europe’s countries go into lockdown for 30 days during March and April, causing a drop in demand for power generation and for burning in the industrial, commercial, and residential sectors. 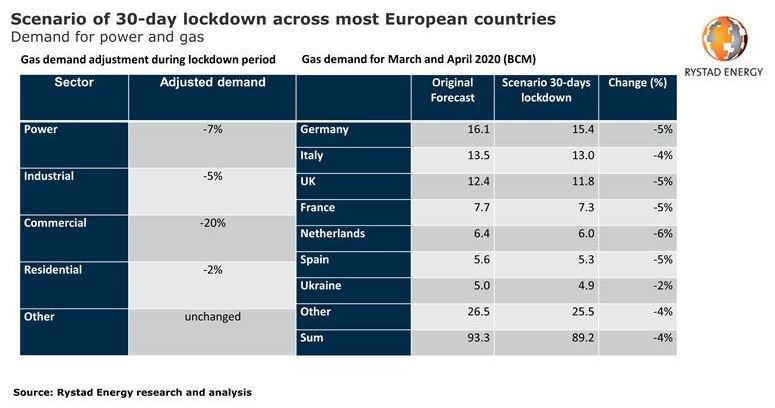 Germany, Italy, the United Kingdom, France, the Netherlands, and Spain are expected to have the biggest impact.

“During the last few days the likelihood of seeing further lockdowns across Europe has increased making this scenario more likely,” said Rystad’s head of gas and power markets, Carlos Torres Diaz. “Also, Italy is about to end its second week of lockdown and it doesn’t seem to be coming to an end yet. It is therefore probable to see reduced commercial and industrial activity in countries for a period of at least four weeks.”

Rystad added that buyers will most likely adjust down their share of pipeline imports to the extent possible and reduce imports of spot LNG cargoes, and the current environment reduces expectations of seeing a recovery in gas prices before next winter. The company concluded there should be enough interest and regasification capacity from Asian buyers to take additional LNG supplies as current price level continues to be competitive vs. coal, which could help prices remain stable at $3/MMBtu throughout the second quarter.

Energy research groups Wood Mackenzie and Rystad Energy say improvements in operations costs since the last downturn 5–6 years ago have made it difficult for companies to make further reductions amid the current drop in demand.