The COVID-19 pandemic has hit oil and gas companies so hard this year that the cuts in their investment budgets will leave only $60 billion worth of greenfield tenders for contractors to compete for, the lowest in 2 decades, a Rystad Energy analysis shows.

This represents a massive reduction, as pre-coronavirus estimates placed the total value of such tenders in 2020 at as much as $132.8 billion. Contractors are bracing for cutthroat competition as new orders, especially fabrication jobs, will be few and far between. Around $60 billion in engineering, procurement, construction, and installation (EPCI) awards originally scheduled to be awarded this year—including $25 billion in equipment and $30 billion in other fabrication jobs—have been postponed.

With most new projects involving floating production, storage, and offloading vessels (FPSO) now facing delays, awards for associated subsea facilities and services are also witnessing another slump after having shown healthy activity in 2019. Also facing a bleak outlook is the seismic market, after exploration and production (E&P) companies slashed exploration budgets over the past couple few months, leading to a considerable number of contract cancellations in recent weeks.

The decline is particularly astounding when seen in contrast to the $170 billion worth of tenders doled out in 2019. Tendering activity is expected to show only marginal recovery in 2021, reaching about $74 billion, according to Rystad Energy research.

“Even many contracts that have already been awarded are at risk of being terminated, with operators initially reaching out to contractors to reduce prices. Given the massive efficiency efforts during the 2015 and 2016 downturn, which have already improved cost margins, we believe there is little possibility that contractors will be able to accommodate significant price reductions in the near term,” said Rystad Energy Oilfield Services Analyst Chinmayi Teggi. 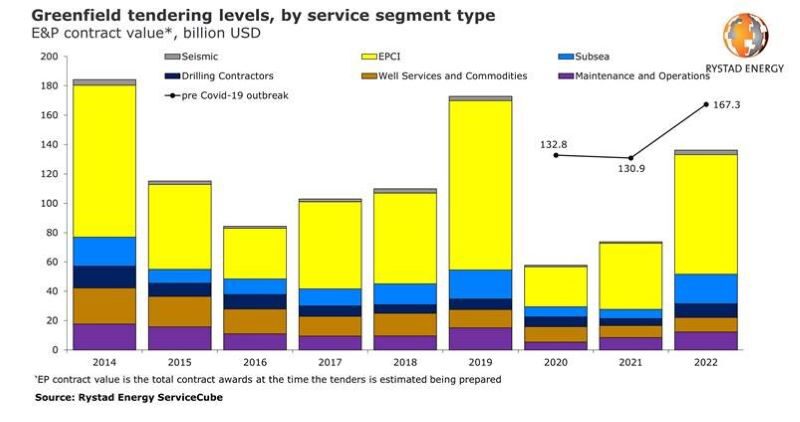 The industry was expecting many high-budget projects to move ahead this year, with all sectors anticipating abundant opportunities. Several FPSO projects were lined up, especially from Latin America and Africa, including the much-awaited Pecan development in Ghana, and the third and fourth Mero production vessels in Brazil.

Quite a few LNG projects were lined up as well, including major initiatives such as Rovuma LNG in Mozambique and North Field expansion in Qatar, both of which now face delays.

The service sector is already responding to the market downturn with efforts to minimize the effects of falling margins. Multiple service providers have already begun cutting jobs, especially in areas earning lower margins, including some of the industry’s giants.

Consolidation efforts across the service sector are underway and could result in further savings. Major firms have also closed some international facilities and reduced capital expenditure for the year, focusing on preserving balance sheets given the low levels of development activity and the subsequent low influx of orders.

“Those with enough financial strength or a sufficiently diversified portfolio will be well positioned for a bounty of new orders once the market gets back on its feet,” said Teggi.