Lower revenue, reduced operating costs and capital expenditures, job cuts, and work furloughs are commonplace in the energy industry this year, as the COVID-19 pandemic has impacted the global economy. The oilfield service (OFS) industry has been hit especially hard in 2020, as a decline in drilling activity and rig counts have led to less work.

As a result, some OFS companies have seen their stock value drop since the start of the year. With the OFS industry looking at reduced activity amid low oil prices, some companies are also in danger of going out of business.

“It is widely acknowledged that the OFS sector is the energy world’s worst-hit market from the COVID-19 pandemic,” said a Rystad Energy analysis. “What is staggering is the extent that the capitalization of listed OFS companies has fallen.” 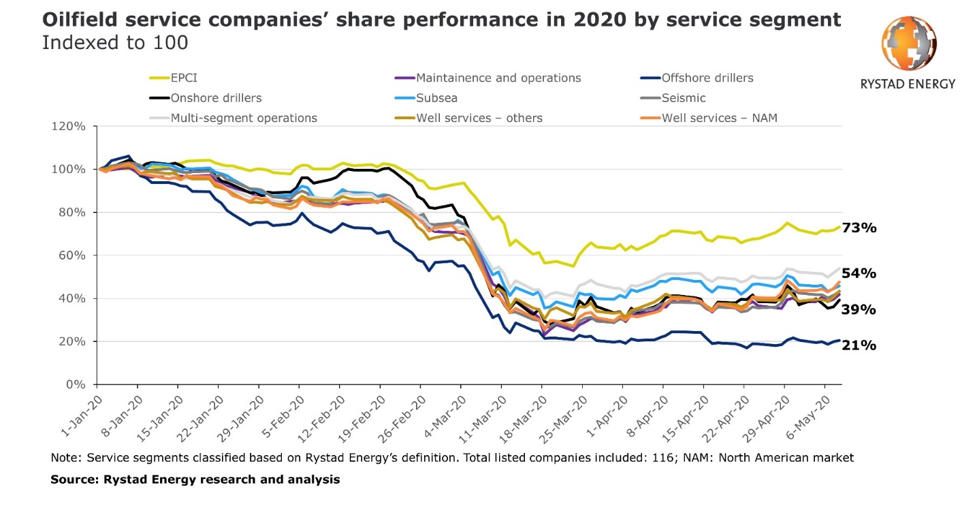 The most-affected stocks were in offshore drilling, a segment that has dropped by about 80% since the beginning of this year, according to Rystad.

This comes as drilling activity dropped at an unprecedented rate over the past 2 months, with horizontal rig counts falling over 50% and fracturing fleets plunging more than 75% so far, said Enverus’s RS Energy Group.

Rig activity is also likely to continue dropping. RS Energy said it believes rig activity will drop about 70% from 1Q 2020, yielding an approximate 50% year-over-year reduction in lower 48 state well completions and a corresponding revenue decline for OFS companies.  Since exploration and production (E&P) companies must pare costs to survive low oil prices, OFS firms will experience significant revenue reductions and embark on their own cost-cutting programs.

“Work for many oilfield service (OFS) companies isn’t there anymore,” said RS Energy. “Unlike operators who generate some cash from existing production despite cutting activity (albeit at a low commodity price), cash flow largely stops for OFS providers.”

The firm stressed that this raises the question of whether the sector can survive a halt in activity.

Rystad noted, however, the best performers among service companies were in the engineering, procurement, construction, and installation (EPCI) sector, which saw market capitalization drop by only 27% compared to the value erosion of between 39% and 54% for most other service segments.

One explanation for the EPCI performance, according to Rystad, is that a significant proportion of EPCI company revenues stems from industries outside of the oil and gas sector. Another respite for the EPCI segment is that the average contract cycle time is longer than for most other segments, which means that these companies are more likely to be busy with existing projects, even if new sanctioning activity is low.

Many offshore drillers, the worst-performing service segment, are in the process of exploring financial restructuring options, while some of the others have engaged in share-repurchase options to shore up stock prices.

RS Energy added that reduced activity levels at lower prices mean many OFS companies with negative earnings before interest, taxes, and amortization (EBITDA) margins will be driven out of business. And with a moderate recovery in activity later this year, the data intelligence group said surviving OFS companies will place a premium on credit-worthy clients who can guarantee an activity level. 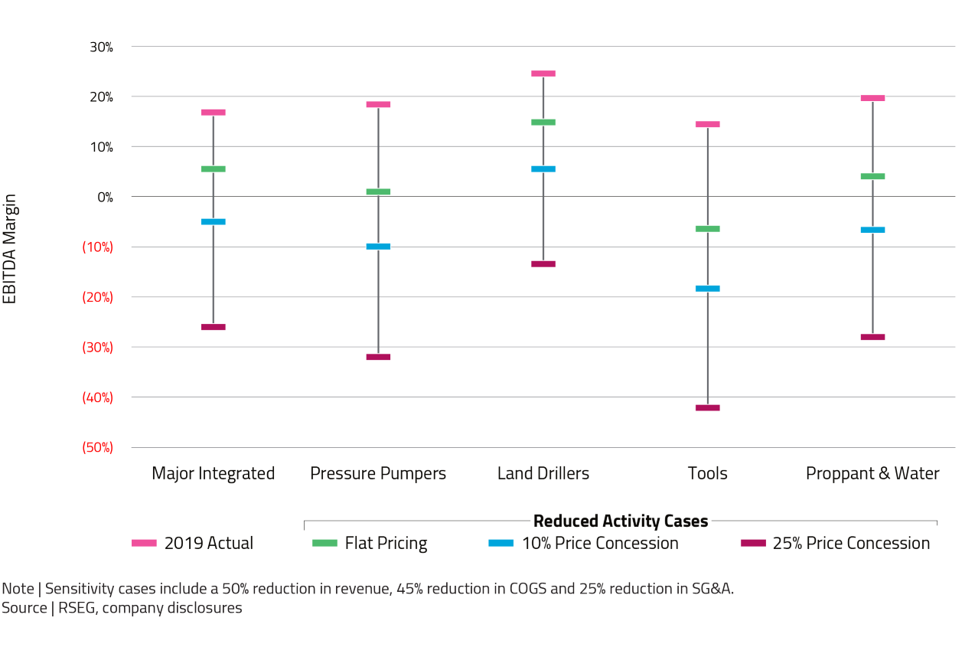 Looking at company size, Rystad’s analysis indicates that large-caps have outperformed the small-cap and micro-cap shares in the OFS market. Furthermore, the share performance gap between large-caps and other categories has widened in recent weeks.

“The result of this crisis will likely be more financial restructuring and consolidation to right-size the capital base across the service segments,” Bagga said. “Additionally, we will see more companies canceling dividend payments and resorting to poison pills and reverse stock splits as the time goes by.”

With one of the world’s lowest electrification rates, Mozambique is moving to give its citizens a brighter future. Together with South Africa’s Sasol, the country endeavors to attract global EPCM companies and international financing to create a power generation hub fueled by gas from onshore fields