With many oil and gas companies cutting their capital expenditure (capex) and operating costs due to the pandemic, one area that is likely to see increased spending is decommissioning work.

Even before the pandemic fully impacted the global economy, the UK’s decommissioning bill was expected to be the largest of any country in the world, according to energy research group Wood Mackenzie.

In an early February report, the group said that over the next decade, capex would steadily decline, decommissioning activity would increase, and decommissioning spending would overtake capex in 2025. It estimated that by 2029, over $20 billion would be spent on UK decommissioning—twice that of any other country—and that early shut-ins would only accelerate the spend. 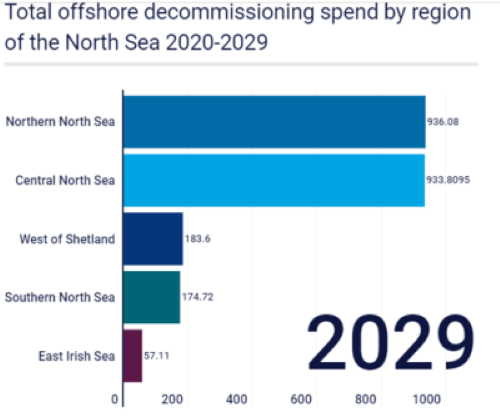 A May analysis from Rystad Energy estimates global decommissioning projects through 2024 could reach $42 billion. In particular, the northwest European decommissioning market could grow 20% in annual commitments through 2022 if oil prices do not recover. Only about 15% of the North Sea assets have been decommissioned to date, but in the next 5 years, Rystad expects an average of 23 assets to cease production annually. 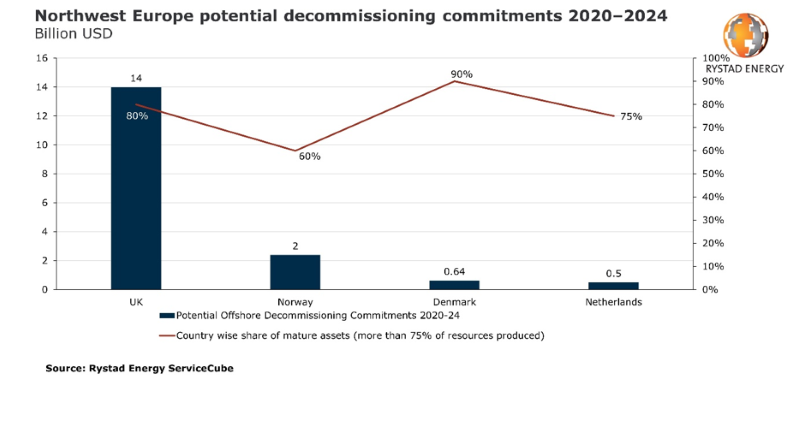 The UK should lead the way with nearly 80% of total estimated expenditure on northwest European decommissioning in the next 5 years, followed by Norway with 14%, and Denmark with 4%. The pool of removal projects in the region for that period is estimated at about $17 billion, according to Rystad. By comparison, decommissioning costs in the US for the same period are estimated at $5.7 billion.

In addition to a rapidly maturing asset base and low oil prices that erode commercial viability and potential life extensions, the North Sea decommissioning market will be helped by favorable service contract prices.

Leading assets that will drive the decommissioning market include the Brent, Ninian, and Thistle fields in the UK, and Gyda in Norway. Two of the biggest decommissioning projects – Canadian Natural Resources’ Ninian and TAQA’s Cormorant– will begin after 2023. Shell’s Brent project should emerge as the world’s single-largest asset ever decommissioned, representing an outlay of nearly $3 billion over the coming decade. Ninian and Gyda together present contracting opportunities worth nearly $2 billion.

Petrofac’s engineering and production services business has begun work on its well-decommissioning contract for the Rubie and Renee fields, 124 miles northeast of Aberdeen.

Through August, Petrofac will provide well operator, well engineering, and project management services to decommission four wells within the Rubie and Renee fields. Three of the wells will be decommissioned on a lump-sum turnkey basis.

As part of the campaign, Petrofac is also responsible for detailed planning, direct procurement, and management of all sub-contracted services, including provision of a semi-submersible rig.

Overall, more than 2,500 oil and gas wells are expected to be decommissioned across the North Sea in the coming decade, of which 1,500 are in the UK.

The Búzios-5 production system is planned to include the interconnection of 15 wells to a floating production, storage, and offloading vessel in two phases.