The Gulf of Mexico (GOM) oil and natural gas industry is a key economic hub for the US, supporting significant employment, gross domestic product (GDP), and state and federal government revenues. As such, political efforts to limit offshore oil and natural gas production would not only devastate Gulf Coast economies but would damage the US, according to a recent study released by the National Ocean Industries Association (NOIA).

“Every barrel of oil produced in the Gulf is a barrel produced under one of the toughest safety and environmental regulatory regimes in the world, and is a barrel that Americans do not have to import from countries like Russia and Iran,” said NOIA President Erik G. Milito. “While some elected officials and political candidates have promised to stop American energy production, including oil and gas production in the Gulf of Mexico, the reality is that these pledges would do untold harm to America.”

Milito added that the lessons and warnings from the report are especially important as the industry looks to recover from the COVID-19 pandemic and the Saudi Arabia-Russia oil price war.

For the purposes of the NOIA report, Energy & Industrial Advisory Partners (EIAP) modeled three scenarios of what the GOM oil and natural gas industry could look like by 2040 based on government data, other publicly available data, and the EIAP’s analysis. The scenarios were based on:

To quantify the potential effects of policy changes, the study forecast a base case activity level for the GOM Outer Continental Shelf (OCS) oil and natural gas activity to provide a comparison with activity and economic impacts if certain policy changes were enacted.

The study forecast key activity indicators such as the number of wells drilled, projects executed, oil and natural gas production, and spending based on projected activity levels. That activity along with spending forecasts were the basis for the projected employment, GDP, and government revenue forecasts presented in the report. 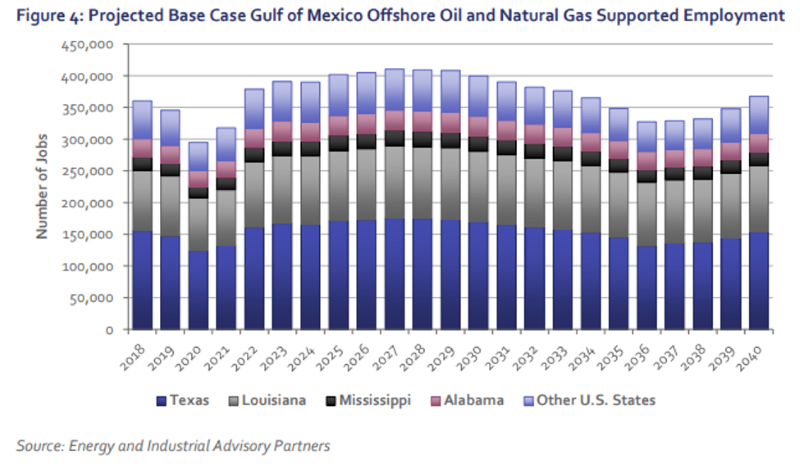 Over the 2020 to 2040 forecast period, oil and natural gas production from the Gulf of Mexico OCS is projected to average around 2.5 million BOE/D and support around 370,000 jobs. 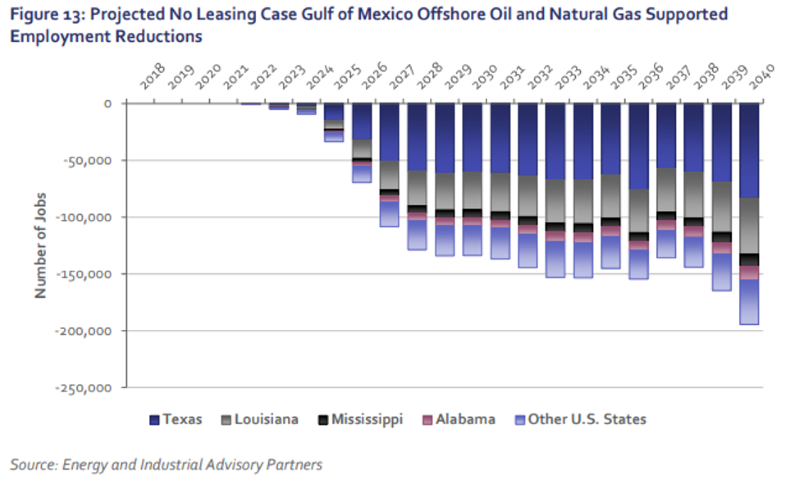 Also, the industry is projected to contribute an average of $31.3 billion of GDP per year across the forecast period, while government revenues (excluding personal and corporate income taxes and property taxes) are projected to average more than $7.2 billion per year. 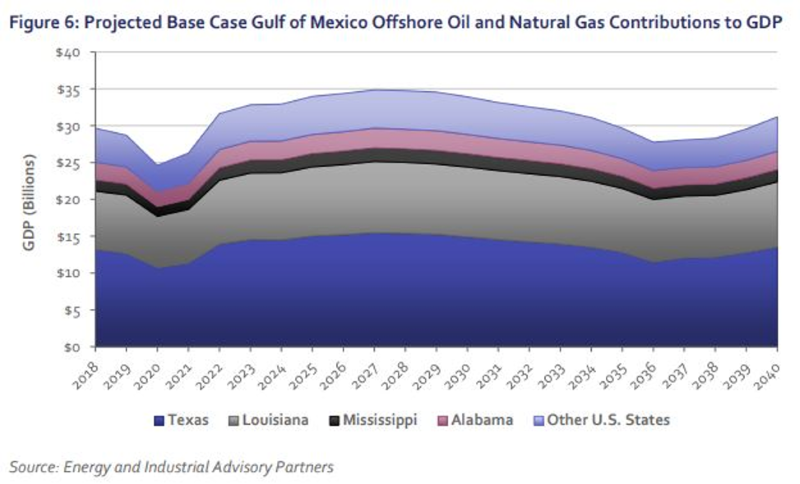 The forecast period is higher in comparison to 2019 when production was at 2.3 million BOE/D and the industry supported 346,000 jobs. GDP contributions in 2019 were at an estimated $28.7 billion while government revenues were at $5.4 billion.

Overall, with business continuing as usual, the industry is poised for further growth. With a lack of new drilling permits and leasing, however, the numbers are to the downside.

The report also notes that state revenue sharing under the Gulf of Mexico Energy Security Act (GOMESA) is projected to fall by 27% to an average of $273 million/yr. This comes as Land and Water Conservation Fund (LWCF) funding, including GOMESA and non-GOMESA offshore funding, is project to fall to just under $585 million/yr compared to $1.3 billion in the base case

The NOIA said that although no firm policy proposals have been advanced, another potentially restrictive policy change for the sector is an end to new leasing in the federal OCS.

The study finds the average combined production across the forecast period is projected to decline from around 2.5 million BOE/D to under 2 million B/D, a decline of more than 20%.

The base case also found average government revenues are projected to fall 26% to around $5.3 billion/yr.

Lastly, contributions to the LWCF, including GOMESA and non-GOMESA offshore contributions, were projected to fall from more than $1.3 billion on average to just over $1 billion.

The 116-page study titled The Economic Impacts of the Gulf of Mexico Oil and Natural Gas Industry, was prepared by Energy & Industrial Advisory Partners (EIAP) and includes such topics as the potential impacts of leasing and drilling bans. It also features profiles of the diverse member companies that make up that segment of the industry and a list of more than 2,400 suppliers representing all 50 states.