Experts Discuss the Health of US LNG Industry

Among the chief concerns facing the US liquefied natural gas (LNG) industry is oversupply, future projects, and the impact of the oil market. In a recent panel discussion, Texas LNG CEO Vivek Chandra and ALNGE Principal Consultant Luc Speeleveld discussed how the US LNG market is reacting and the outlook for the industry.

In discussing the position of US LNG, Chandra outlined four key hypotheses:

1. Spot prices should not be relied on to make sweeping market judgements

2. Cancellations of US cargoes demonstrate strength in the US commercial model, not weakness

4. The US has more potential final investment decision (FID) projects than any other location; but not all second wave projects are equal, and only a few will reach FID

When discussing the LNG spot market, Chandra said the industry should beware of getting too excited by the Japan/Korea Marker (JKM) LNG price, which also includes China and Taiwan. The industry should beware of assuming the spot price is the long-term price. The JKM prices can be highly skewed and it does not have any mathematical link to most cargoes delivered into the markets, he said.

“It (JKM) is at best an indication of the spot prices,” he said. “It is not directly linked to any particular cargo ship, contract, buyer, or seller .”

Also, as demand has decreased in Japan, Korea, and other countries, buyers may continue long-term purchase rather than spot cargoes, since canceling long-term deals incurs cost penalties.

Over 70% of cargoes delivered by long-term contracts are not covered by the JKM price because they are confidential. They tend of be linked to oil prices, and many are strict destination cargos.

Chinese imports disproportionately skew the JKM price. Chandra said it is estimated that over 50% of JKM reported prices were for spot cargoes delivered to China, significantly higher than China’s proportion of total imports into northeast Asia.

This comes as the Chinese economy has rebounded from the COVID-19 pandemic faster than most countries, which leads to heavy buying of spot cargoes at a relatively low price.

Although buying interest in Asia has increased, it’s also more difficult to cancel those cargoes

Cancellations of US Cargoes

Cargos bought from markets outside of the US often include a full-cycle amount, which can include shipping, liquefaction, and pipeline cost. Because those extra costs are not visible to the buyer, and cannot be broken down, Chandra said buyers are less likely to cancel cargoes bought outside the US.

US cargos, however, can be canceled. “The beauty of the American model is that it’s more flexible,” he said. 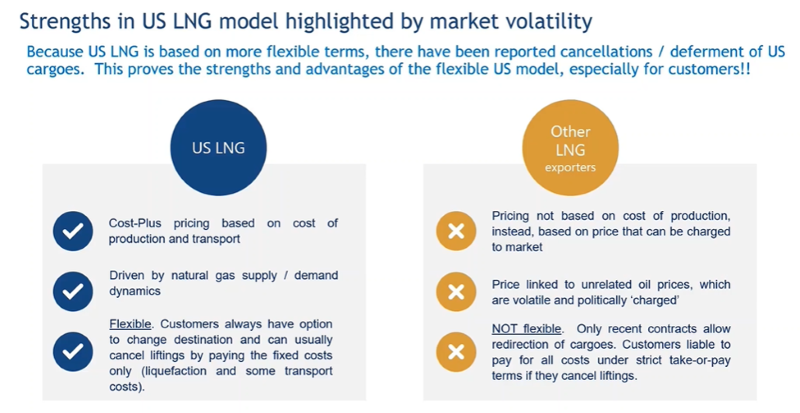 When canceling a US cargo, market participants may have options such as paying liquefaction costs, reselling feed gas into the US market, and deferring costs such as shipping. That flexibility may entice over the next 5–10 years to look toward the US in volatile markets.

This comes as the LNG industry considers bringing a second wave of projects on line in the US.

Although a second wave of US projects is being planned, Chandra said customers should look at projects that are realistically sized. Large 10–25 mtpa projects will have difficulty finding customers in the current marketplace, making it unrealistic to get sanctioned.

Along with capacity, he noted that access to adquate, low-cost feed gas and proximity to open water on less-congested waterways improve the likelihood of sanctioning.

There are many fundamentals and risk factors to be reconsidered for the second wave of US LNG, however. Speeleveld highlighted key issues companies will face.

More importantly, Speeleveld added the market will also be looking at options such as better pricing, projects with proximity to certain markets, and the cost of gas at the inlet of liquefaction plants.

Speeleveld said other considerations may include options besides US Gulf Coast projects for trade balances, the carbon footprint of LNG, diversification of supply, and the safety of LNG for South China Sea passage.

With this expected capacity growth, Speeleveld said 100–120 mtpa is yet to be contracted. As sales and purchase agreements expire in 2020–2026, another 40–60 mtpa would also have to be re-marketed.

That would put 140–180 mtpa into a market, which Chandra and Speeleveld both said remains uncertain.

When Saudi Arabia kicked off a price war this year it resulted in market disruptions and affected growth of US shale development and the US LNG industry.

“The Saudis are sending a signal that oil still rules,” Speeleveld said. “If you wish to outsmart it [oil], or predict it to develop alternatives, you might be in for a surprise.

An example of this is when the first wave of US LNG projects was trying to move away from oil-priced indices. With Henry Hub-indexed LNG prices more expensive than oil-indexed LNG, the shift away from oil prices backfired, causing major accounting losses.

Adding to that uncertainty is the if and when there will be recovery from demand destruction caused by the COVID-19 pandemic. More recently, crude oversupply and limited storage options have led to production cuts, leaving analysts to ponder when or how demand will come back. European gas storage terminals are also full due to weak demand, after the Asian prices converged with Henry Hub prices in early May. Henry Hub, the US natural gas benchmark price, has long been the least expensive due to ample supply.

Speeleveld, however, said prices may remain low for a while longer due to the already ample supply.

Henry Hub LNG prices are likely to remain unattractive to the market unless sellers can address drivers such as tolling fee reductions. Speeleveld shared Chandra’s position on full-cycle pricing, noting that full-cost Henry Hub prices are not economical and unattractive to buyers.

Oil pricing may be the preference moving forward, but some alternatives to oil prices and Henry Hub gas prices may be in other US regions such as the Waha Hub and international markets such as JKM and other regions.

Seadrill is seeking options to restructure its $7.3-billion debt. The offshore driller previously emerged from Chapter 11 bankruptcy protection in 2018.