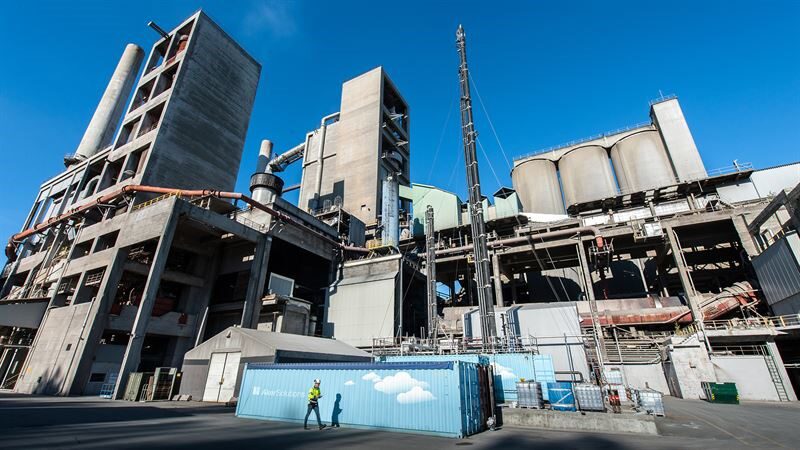 The 400,000 metric tons of carbon captured each year from Norcem’s factory in Brevik, Norway, will be transported to the Northern Lights project for permanent storage.

Subject to Norwegian government funding, the Aker Solutions/Norcem deal would next advance to the engineering, procurement, and construction delivery of the plant.

Carbon dioxide is formed when cement is produced through crushing and burning limestone along with quartz and slate. Worldwide, 4 billion tons of cement are produced every year; chemical and thermal combustion processes involved in cement production generate about 8% of global CO2 emissions, according to policy institute Chatham House.

For its part, the cement industry has been trying to reduce its carbon footprint. And yet, to date, of the 18 large-scale carbon-capture systems in place at industrial sites across the world, none have involved cement plants.

In Canada, Lehigh Cement has launched a feasibility study on a full-scale carbon-capture and storage (CCS) project that involves funneling the plant’s emissions into a large vessel that absorbs the carbon dioxide. The CO2 is then transferred to a second vessel where heat is used to compress the captured CO2 for storage and resale, or to be pumped out through a pipeline to the market.

The potential global market for waste CO2 products could be $5.9 trillion a year, of which $1.3 trillion includes cements, concretes, asphalts, and aggregates, according to Carbon180, a climate-focused nonprofit based in California.

At one coal-fired plant in Wyoming, a team from the University of California, Los Angeles (UCLA, have developed a system to transform waste CO2 from flue gas coming directly from a power plant’s smokestack.

The system is unique among green concrete technologies as it does not require capturing and purifying CO2 emissions from power plants. Instead, the UCLA team siphoned off CO2 from the plant’s flue gas and exposed it to calcium hydroxide and other ingredients cured in a reactor, to create a solid building component akin to concrete.

In July, the group will repeat the 3-month pilot at the Department of Energy’s National Carbon Center.

The team is among of 10 finalists in the NRG COSIA Carbon XPrize competition to develop technologies for converting carbon emissions into valuable products. The $7.5-million Carbon XPrize will be awarded in September.

Watch how cement is produced.

Tellurian CEO Meg Gentle outlined how the US LNG market should address expected tight market conditions through 2025 while managing a transition to a carbon neutral environment.