It is painfully obvious that the COVID-19 pandemic has had a catastrophic impact on the global economy and the global energy market. This has been especially evident in the US Permian Basin and on the oilfield water sector.

Energy intelligence groups Enverus and B3 Insight agree, however, the market will likely get worse before it gets better.

“There’s a really important dynamic here when we are thinking about lower capex spending, lower rig count, fewer wells being drilled, fewer wells being completed, wells being added to the DUC [drilled but uncompleted] count, and what this means for water,” said Bernadette Johnson, vice president of strategic analytics for Enverus Drillinginfo. “Whether it’s for fracking, or produced water that needs to be disposed, there have been a lot of interesting things happening in the water space related to permitting.”

Johnson added that the number of wells, the capacity of those wells, and their potential impact on seismic events have been key drivers of what happens with water. Those factors will continue to have ramifications for the cost of disposing water in the future when crude production rebounds.

Since 2019, Permian operators have seen almost $23 billion in total annual capital expenditure taken off the table. When compared to 2018, the figure is close to $36 billion. Johnson said these dramatic cuts in CAPEX are not a surprise, especially as earnings season saw more cuts. Johnson adds that 2019 was already in a depressed environment because of the lower prices and the push to operate within cash flow.

“One of the big things to keep in mind though is that it’s not going to last forever,” said Johnson. “The Permian is still foundational to US production and US production growth, and we are directly a part of the US market.”

The cuts in CAPEX this year came just as Permian supply was at its peak at nearly 5 million B/D in March. Since then, the supply decreased and Enverus expects a further drop to 3.056 million B/D in the region in mid-2021 before it goes on a steep upward trend.

Johnson noted her company does expect a price recovery sooner, but production lag times may be a factor for the market to consider.

Another point brought up is the takeaway capacity of supply in the Permian. Johnson points out that the US had excess capacity since last year when a handful of important projects came on line. With that in mind, a bottleneck on the crude side in refining and takeaway capacity is not expected to be an issue in the near term due to the slowdown in production and CAPEX spending, but may become relevant in the mid-2020s.

When demand returns, it will take time to work off those stocks, resulting in a longer-term recovery. Enverus data indicate WTI prices may rise to $60/bbl by 2022, albeit with a higher risk premium built in.

Another challenge for the water market is the declining rig count and shut-ins. Active rigs have fallen to record low levels. The Baker Hughes rig count on 19 June showed US rigs at 266, its lowest level ever. This came alongside a Permian rig count at 132, which tied a record low set in 2016. 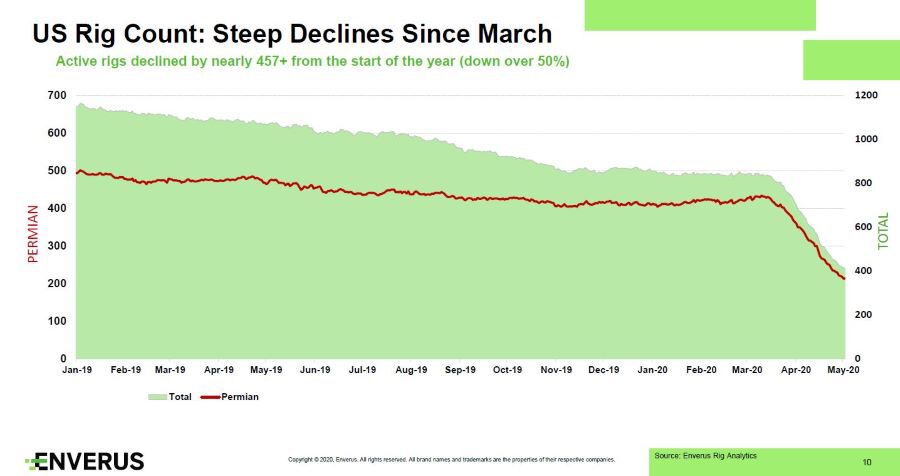 Shut-ins are more challenging to predict, but volumes at risk of shut in can be identified. As oil prices drop below variable operating expense, Johnson said operators will weigh the costs and benefits of keeping the wells in production, including the potential for permanent loss of capacity.

“When we had WTI below $20/bbl and $10/bbl, the regional prices were much lower,” Johnson noted.

This comes amid a likely double dip in refinery utilization as well, she added. Refinery utilization in May was at 50%, leaving a total of 3.4 million B/D of crude stranded. Regions most impacted by this were the Permian, Eagle Ford, and Rockies. 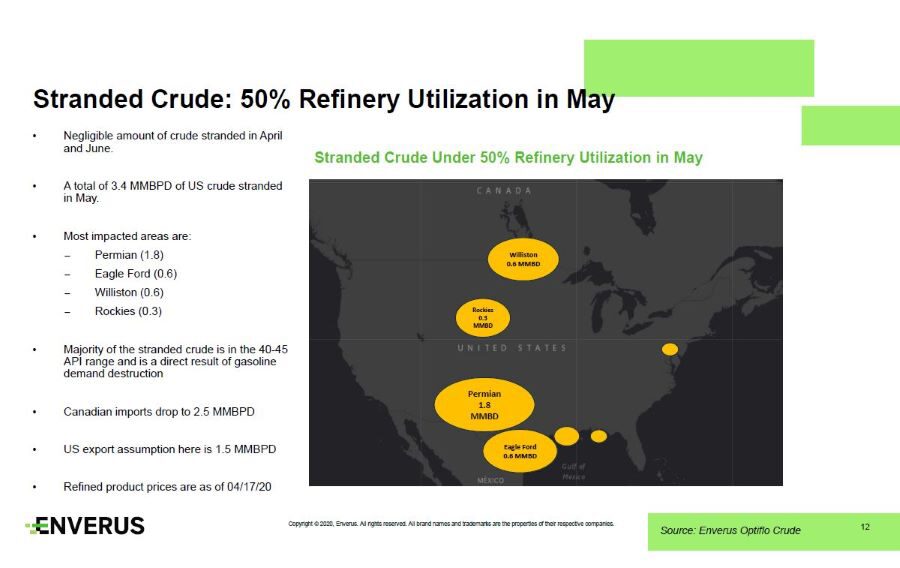 B3 Insight CEO Kelly Bennett also pointed out although 2019 was seeing depressed prices and reduced CAPEX, producers in the Permian outperformed base expectations. That has a big impact on the amount of water that the region will produce even with the reduction in drilling.

“Even with a significant decline from now through 2022, recovery starting in 2022 yields a higher production forecast for crude oil than our low-price scenario did starting from the lower base case.”

Acknowledging the risk of shut-ins near term, Bennett reiterated that the long-term outlook still begins from a higher base of production, which has significant implications with water production as well.

From a DUC standpoint, taking its low- and high-case scenario, B3 still forecasts a significant number of wells being drilled through 2028. Despite the assumption that there will be a period of no wells being drilled and brought online, B3’s forecast starts from a higher production case that has implications for produced water volumes.

Besides a healthy economic environment, research, technology, and investment are needed to grow the oilfield water industry, which Bennett said poses a Catch-22 scenario.

“We need a lot of technology to model and understand how to treat water,” said Bennett. “All that will require a tremendous amount of investment. While the oil industry is dependent on a good outcome of the water management component of its cost structure, investment in water management relies on a healthy industry where investors can see a rate of return in the future.”

With the current economic downturn, the industry is likely to miss crucial investment cycles as oil and gas companies continue to cut costs and investment.

Another issue facing the water industry is regulatory policy.

“Overall, we think the Permian is still about growth,” Bennett said. 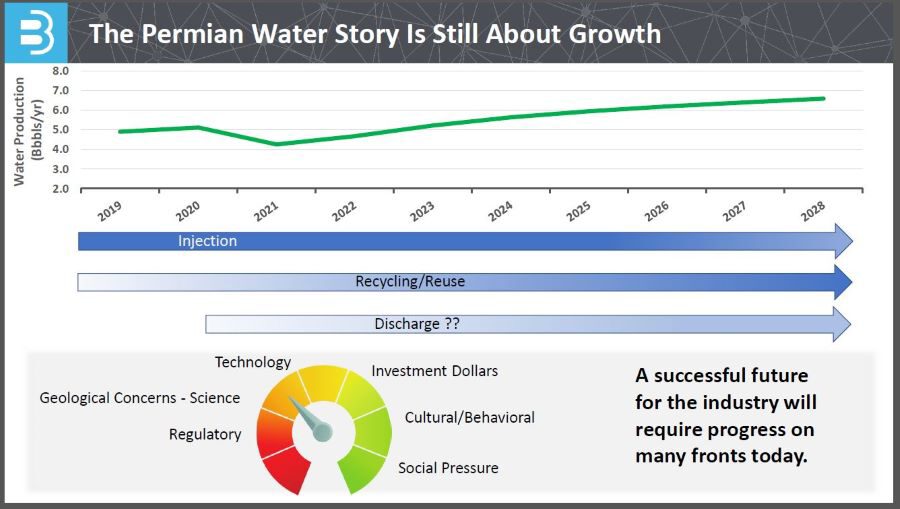 There have been many competing technologies and approaches to water management. But Bennett stressed there is serious policy work that needs to be done in Texas and New Mexico. Culturally, he adds the industry has a way to go on thinking collaboratively on local, state, and federal levels to achieve a good alignment between them.

As One Louisiana LNG Project Begins, Others Still in Development

The Cameron LNG project completed its final train this month, but other LNG projects such as Calcasieu Pass LNG, Driftwood LNG, and Lake Charles LNG face difficulties during the economic downturn.