US Crude Exports to China May Depend on Arbitrage

US crude exports to China are expected to remain primarily opportunistic at lower levels, compared with the recent high levels seen in May and June, according to energy intelligence group Vortexa. The spike seen then was mostly opportunistic and arbitrage-driven and supported by favorable fundamentals.

The company added that US crude fundamentals are shifting through the balance of the year which is likely to create challenges for exports.

US crude destinations were stable a year ago, with a third of exports going to Europe and the Mediterranean, a third going to East Asia, and a third going elsewhere, said Vortexa lead market analyst Will Holeman. 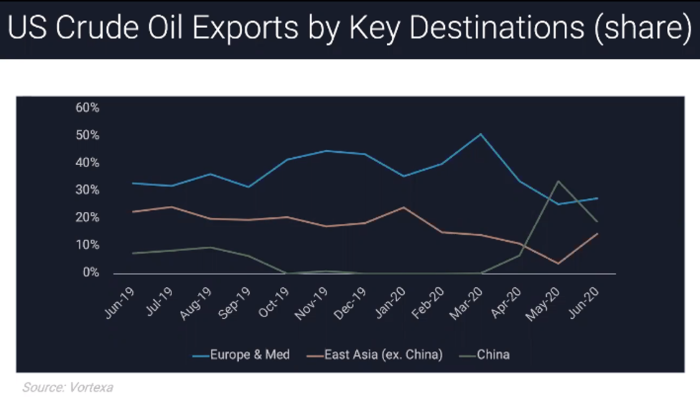 The distribution of US exports began to shift from October 2019 through April 2020 with Europe taking more volumes than East Asia as buying from China came to a halt. This was due to several factors, most notably the loss of Libyan barrels to the Mediterranean, Holeman said.

Volumes to East Asia picked up again in May 2020 as South Korea returned from its refinery turnaround season, which offset Chinese demand.

“From a very basic level, if the US begins to see year-over-year and month-over-month declines in top-line crude exports, then we should see retreats in flows along the marginal northeast Asia route,” said Holeman.

Meanwhile, global crude storage is up this year due to lower demand brought on by COVID-19. Long-term storage has been steady since April, and short-term storage came off into July, likely due to clearing of congestion, said Vortexa product specialist Conor Stone. 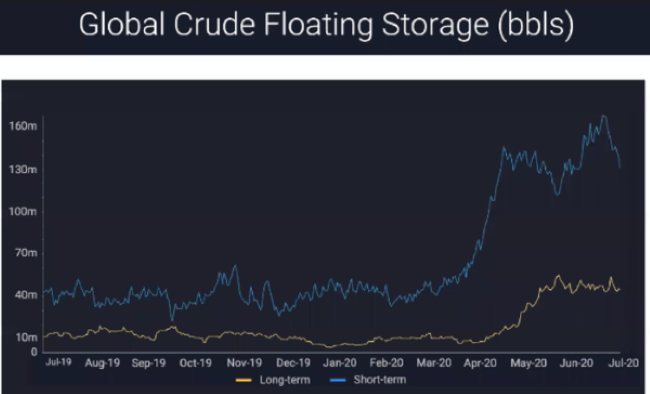 “Should these volumes come off further, you may see more tonnage being released into the market, which adds further downside risk to freight rates,” said Stone. “So if you have a depressed freight rate environment, you may see some arbitrages open up, should the differentials play in that favor.”

Stone said if volumes from Libya return to the Mediterranean market, it may free up US volume for Asia in return, but this may be a long-term view. Stone added that if gasoline demand from the US and other regions returns, it could mean more demand for the lighter end of the crude barrel.