What Are the Market Drivers for a Recovery?

The crude oil and natural gas markets may recover in 2020, but the speed of recovery in terms of pricing will be different. The crude oil market is rebalancing following a recent mild price recovery, but an increase in COVID-19 cases remains cause for concern. Natural gas may not recover until winter 2020/2021 as low prices, weak demand, and ample storage weigh on the industry.

“Each of (the markets) has very different dynamics going on, but they are definitely being impacted by pandemic and demand destruction trends,” said Enverus VP of Strategic Analytics Bernadette Johnson.

“This [oil] is one of the most volatile commodity markets in the world, so we should expect this going forward,” Johnson said. “Things like a tweet from an oil minister in a foreign country, or a change in OPEC or an OPEC meeting, or even a tweet from our own administration. Those things are going to move oil markets.”

Since trading at $100/bbl in 2014, WTI and Brent crude oil moved between a range of about $35–80/bbl through 2019. After falling into negative territory for the first time in April, WTI prices recovered to $40s/bbl in June after production cuts and a partial recovery in demand for motor fuels. 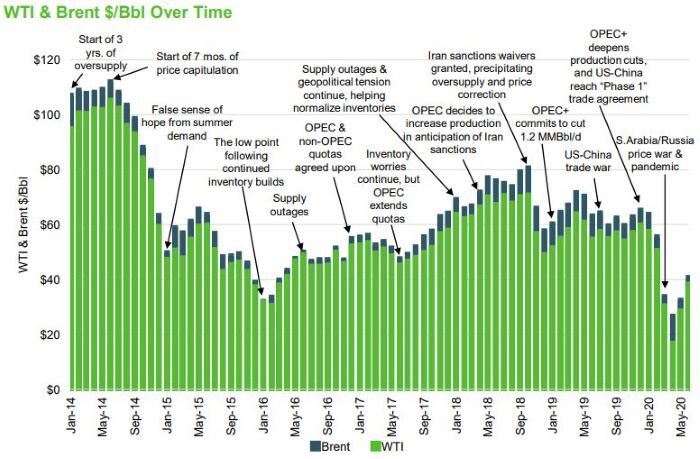 Enverus remains cautiously optimistic that the supply/demand rebalancing will continue, with much-needed inventory draws coming over Q2 2020, extending into 2021.

“This is also a strong signal from OPEC that they’re not expecting demand to recover to pre-pandemic levels quickly,” Johnson said. “In the meantime, they need to manage that supply so we can get up to an equilibrium price that the major OPEC+ members can live with.”

The US rig count is another signal that the market is recovering.

In July, the US was running about 270 rigs, which is at the lower level since2016 during the last economic downturn. The Permian had the biggest decline, going from 400 rigs in January to about 150 rigs by June.

Rigs that are drilling wells mostly resulting the drilled but uncompleted (DUC) inventory count. Wells in the DUC count will not be completed until prices rebound sufficiently or crude buyers emerge.

A key question that remains, according to Johnson, is what price would producers need before they start adding rigs?

“We really haven’t seen the rig count increase yet, so the answer is not $40–42/bbl,” said Johnson.

Transportation accounts for 70% of a barrel of oil, and unless that demand comes back, Johnson stressed there is no real recovery in the market.

Refinery margins are also a key indicator of when refiners may ramp up production.

Global crude oil supply must also stay below demand through 2020 and most of 2021 to correct the market.

Johnson said, however, another wave of COVID-19 or another lockdown in certain US states could saturate the market again and delay recovery further.

The recovery in crude oil is already underway, but the natural gas recovery will take longer.

A Slower Recovery for Natural Gas

Natural gas did not react to the pandemic as quickly as WTI crude. The market remains very bearish, with prices averaging under $2.00/MMBtu in 2020. Demand losses due to COVID-19 have also been higher than production declines.

For US LNG, exports did not fall until May when Europe and Asia began cancelling cargoes on the back of weak demand. Before the pandemic, US LNG exports were about 9 Bcf/D in Q1. By June, LNG exports dropped to 4 Bcf/D, levels not seen since 2018.

Export demand is forecast to increase to 5 Bcf/D during Q3 before increasing further to 7.5 Bcf/D in Q4.

Based on breakeven prices under $4.00/MMBtu, the company said production growth will come from the Marcellus/Utica, Haynesville, and Permian plays.

As the crude oil and natural gas sector recovers, Q2 2020 earnings reports will begin in late July with the market expected to focus on curtailments, activity, costs, and liquidity.

A Preview of Q2 Earnings Season

Johnson noted there was a surprising amount of optimism on Q1 calls amid the pandemic.

Curtailments and Activity. Actual volumes shut in are unknown unless disclosed, with mixed results expected to vary by company. Higher-rate horizontal wells are expected to return to production, while vertical wells or lower-rate horizonal production may still compete with variable costs, in addition to the cost to turn production back on. Economics are also expected to be emphasized over volumes.

The big question Johnson asked is how much operations will be able to sustain those low costs going forward.

With borrowing bases slashed and credit capacity for most operators limited, the industry is likely to see plans for potential monetization of assets, halting of buybacks or dividends, kicking debt maturities down the road, and reducing interest expenses.